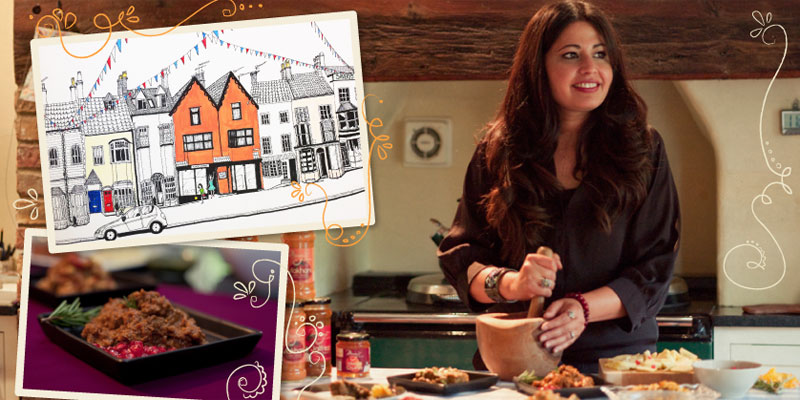 Romy Gill opened her restaurant, Romy’s Kitchen, near her home in Thornbury, South Gloucestershire, in September 2013. Romy also has her own line of Indian sauces, pickles, spice mixes and chutneys. Romy recently ran the Mumbai Marathon in aid of the Bristol-based Charity, FRANK Water and she is also an Ambassador for Bristol 2015, helping to showcase the city’s award as the Green Capital of Europe.

“…I’m the first Indian woman who is not only the Head Chef, but also the owner, the sole owner… there’s no partnership, there’s no investors – on the deeds and the papers it’s just me…”

It’s been a year and a half since we opened Romy’s Kitchen. It has its ups and downs as every business does – when you start up it takes time. We’re established now. We’re here. Every step is a learning curve for us. We’re doing really well. We have a really good reputation. People love us and travel from far places to come and eat.

There will always be people who will be judgemental and who don’t like my food. You can’t please everybody, but I love what I do. I have built a really good team and without a good team you can’t do it yourself.

No business partnership, no investors – just me

I’m the first Indian woman who is not only the Head Chef, but also the owner, the sole owner. My husband doesn’t own it. For me it has been something I’ve opened by myself [the restaurant isn’t family owned], there’s no partnership, there’s no investors – on the deeds and the papers it’s just me and I’m the Head Chef. That speaks volumes.

I have two girls – I have to juggle around them. I’m a family person. I enjoy looking after my children. We are very strong family. My husband is a great supporter, but the thing is, I have to run this business on my own. It is challenging but I do love it. For me this is my business and I need to focus and I need to make it very successful.

Expand your business, but do it steadily

I sell a lot of pickle and chutneys as they are very popular. We’re bringing back the sauces and I’m going to start selling in local delis and local farm shops. It’s another new venture going other places. To expand your business you have to do it steadily. When you are a small business you have a limited amount of funds. It isn’t easy, but you’ve got to stay focused and you’ve got to know what you want.

You’ve got to keep bringing new ideas, so we’re offering tiffin boxes. So the customers order their takeaway, which we serve in their own tiffin boxes that they bring back each time. I grew up in India having tiffin as lunch boxes, which is a stack of tiffin with four different containers. We do one vegetarian or one chicken. We keep it simple. We don’t want too many people wanting too many different things so it doesn’t become too complicated.

For us it’s eco-friendly. It’s dishwasher safe. It’s not disposable plastic containers. It’s nothing like that. People bring back the dishes they buy from me (they’re £10) or if they already have it, they can use their own.

I’m an Ambassador for Bristol 2015, the Green Capital of the UK, so I’m constantly thinking about eco-friendly things, so we grow some of our own vegetables, recycling your stuff – we do that at the restaurant. I am also an Ambassador for FRANK Water. It’s a charity based in Bristol – they provide clear water and sanitation for India. It was started after a girl called Katie Alcott went to India and became seriously ill about ten years ago.

I support lots of charities, but to become an Ambassador I had to have a reason for it. Water is very, very important. In addition to drinking it, we forget that without it we can’t bathe, we need to have baths, we need it to clean or our clothes, for washing up, we need water for everything. We take it for granted. For people in Africa or India, water is gold, water is so important.

So for me to become an Ambassador for them, talking about it, making people aware about it, it had to make sense, for me also because I grew up in India and I live in Bristol. I raise money for them every year.

Finishing the Mumbai marathon not only for my daughters, for my charity, but for me 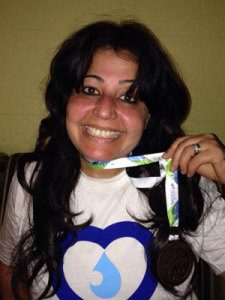 On 18th January this year I did the Mumbai marathon for them because I wanted to go back to India. It was very hot and it was a big challenge because since I’ve opened the restaurant I haven’t run at all. I started running again here and there a few months ago, but I hadn’t really trained at all. When you’re used to standing for 16 hours you get incredible stamina in your legs.

I knew I needed to finish this, not only for my daughters, not only for my charity, but for me. Towards the end it was so hot but I really enjoyed it. I was all hyped up. My sister was there and my niece was there, and I had lots of chefs there to support me.

I do events for the FRANK Water charity, so I decided because it was the tenth year anniversary that we should open the events starting with the marathon.

I have always done the marathons in the past in Berlin and New York and I thought, “I want to go to a different country. Just go for three days or four days and enjoy the atmosphere.” It was extreme temperatures. When I was running here it was either eight degrees or minus four sometimes or ten, so going to extremes, going to 30 degrees was kind of extreme! It was fun.

Supported by friends and customers

We have a Virgin Money Giving page. We have been raising money in the restaurant and a lot of customers and friends have been very generous. Also on the 11th February I’m inviting my friends and my customers to have a three course meal for £10. They can eat as much as they want. Some people are very generous and they pay more than £10. It doesn’t go in my pocket – that goes straight to Frank Water.

Bristol is an amazing food city and for Bristol 2015 I will be going into lots of schools to talk about water and to talk about food and how it’s grown, sourcing it locally, and also to talk about recycling. Also for me to be a diverse person coming from a different country, living here, I think it’s important for helping the kids.