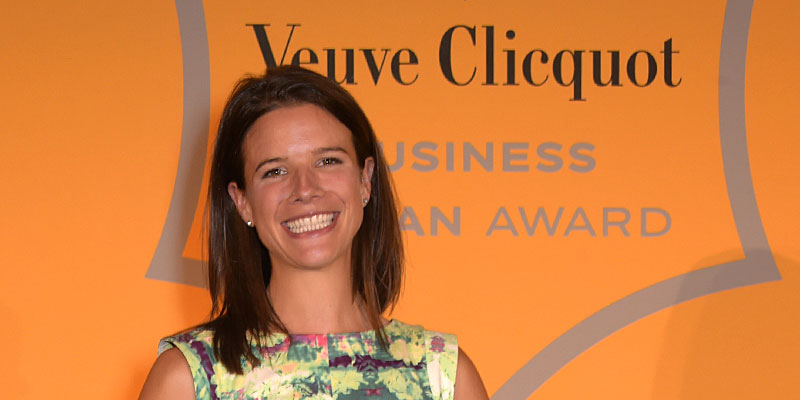 Emily Brooke is founder and CEO of Blaze, a business that tackles the most common cause of cyclist fatality, which is being caught in a blind spot, or vehicles turning across an unseen bike. Its flagship product, the Laserlight, projects the symbol of a bike down onto the road in front of the cyclist, increasing the footprint of the bike, alerting drivers ahead of its presence and preventing them turning across its path. Emily began reading Physics at Oxford University but left to pursue design in Brighton and Milan, before winning an entrepreneurial scholarship in America and going on to create the Laserlight concept and starting her own company, Blaze. 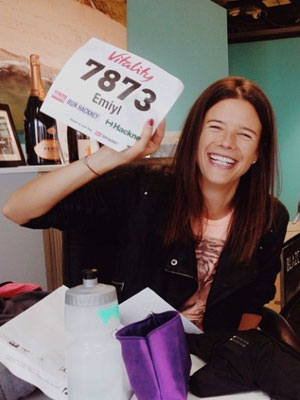 On 11th May 2015 Emily was awarded the Veuve Clicquot New Generation Award set up to celebrate up and coming female entrepreneurial talent in the UK who show a genuine commitment to responsible and sustainable business practices whilst optimising a gap in today’s market.

The past three years have certainly been a rollercoaster! An adventure I feel incredibly fortunate to have been on. Four years ago, I had never been on a road bike, but decided with a girlfriend to cycle the length of the UK for charity. We bought bikes, trained for four months and cycled 1,000 miles. I fell in love and have been on a bike nearly every day since!

Designing a product from concept to final design

Previously I had left Physics at Oxford University, to study Product Design in Brighton. The week the ride finished was the week my final project started, and I had a year to design a product from concept to final design. I had loved the summer training in the countryside, the sense of freedom, the scenery. It had been a beautiful, relaxing experience. But the cities were in contrast stressful, exhausting and dangerous.

I therefore gave myself the theme ‘Urban Cycling’ and wanted to identify and tackle the biggest problem for city cyclists. As soon as I started my research I found personal safety was by far the greatest challenge – the most pressing concern to existing cyclists and the barrier to those who don’t.

I then spent six months of deep-dive research, working with a driving psychologist, the Bus Company, a tonne of other cyclists and analysing the statistics of which accidents most commonly happen.

There was one statistic which really stuck out to me and still amazes me today, and that is that 79% of cycle accidents occur when the cyclist is travelling ‘straight ahead’ and a vehicle manoeuvres into them, turning across their path. I realised that the threat was actually more commonly in front of you.

Pondering this I had a classic “Eureka!” moment while biking through town. I realised a truck just ahead couldn’t see me, if he suddenly swung now, I’d be squished. I wished I was just five yards ahead, where he could see me… And so the Blaze Laserlight was born.

I patented the concept whilst at university, but didn’t start the company until September 2012. We have now been selling for just over a year and already shipping to 50 different countries.

Yesterday I received the Veuve Clicquot New Generation Award, which celebrates young female entrepreneurship in the UK. I feel very honoured, humbled, and excited to receive this acknowledgement. I am just overjoyed. And especially thrilled how proud it’s made my mother!

Winning an award like this makes you think about how you have the potential to be a role model. To anyone thinking of setting out on a similar path, I’d say listen to your heart and go for it! You’ll learn so much more by doing than by thinking about it. Reach out to people who have done it before, who can guide you and support you.

Being a woman is not a stigma. It’s not a hurdle to be overcome

There’s a lot of discussion in the media about supporting women in business and entrepreneurship. And whilst it’s wonderful to support and learn from each other, being a woman is not a stigma. It’s not a hurdle to be overcome.

For me, personal traits I believe helped me get to this point today have been naïve optimism, dogged determination and an endless eagerness to learn.

If I had my time again I would absolutely be building Blaze – I just wish I’d done it sooner. The minute I had the idea for our first product, I knew it was good, it had to become a reality. Though having never even had a job, I didn’t think it would be me!

My role model in life has always been my mother. She’s someone I truly admire and strive to make proud. She worked phenomenally hard at my age – from everything such as a cigarette girl in nightclubs and a model, to running a publishing company and property investments. She’s an inspiration.

Being an entrepreneur means never standing still, constantly innovating. Growing a valuable company is something I am passionate about. We have a very exciting project we’re about to announce, it’s a potential game changer for us. So all that’s left to say is watch this space…