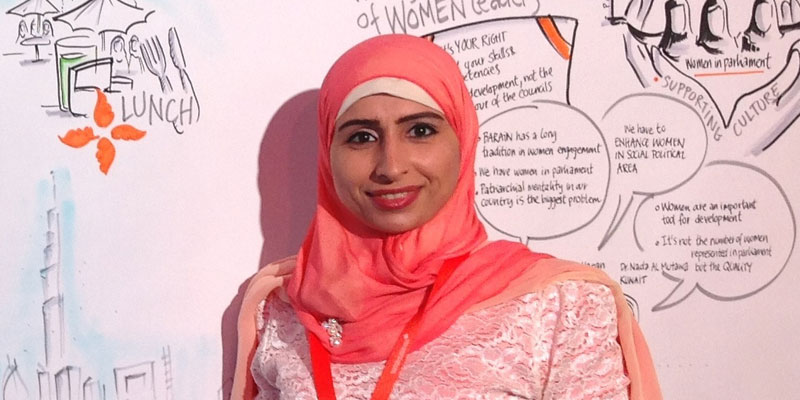 Doaa Adel ElEraqy is a Dubai based tech entrepreneur, founder of Arab WomenPreneurs and is also the mother of a young daughter. Before creating her own hub for female entrepreneurs across the Middle East and North Africa region, Arab WomenPreneurs, she gained experience in software engineering and digital marketing, writing her first business plan when she was 19 years old. Her graduation project was selected as one of the top 30 in a business competition and she was recognised for excellence during her postgraduate course in computer science at the Arab Academy for Science, Technology and Maritime Transport.

Doaa – you’re an excellent role model for women in tech! How did you get interested in IT?

I have always been curious about science and maths since I was a child. I used to get high grades in maths and physics, so I decided to join a pure computer studies in my high school. I was advised by a professor in mathematics and a family friend to study information technology and computer science, so I got my bachelors qualification in computer science.

What programming languages can you use?

I used to use Java language doing desktop applications. I am aware of few other languages, like Ruby, C#, Objective-C. Now, I am using HTML5, CSS and JavaScript in building the Arab WomenPreneurs site.

What brought you to Dubai from Cairo?

I moved to Dubai with my husband’s new job. I came here when my daughter was only two months old.

What was the gender balance like of men and women on your courses?

As a student computer science, there were far fewer women than men. We were roughly 160 students, of whom a very few were women.

As software engineering is a male dominated profession, most of the developers are men and there are few female developers. (So for every ten developers, two or three are female.)

Why do you think there are so few women in IT and how can we change this?

In our region there are a lot of high quality women graduates in IT, but companies are afraid to hire them because they are worried that if they get married they might stay at home and be answerable to their husbands or they might leave to have children. That was what I heard when I was in a discussion about that issue, so most of them prefer to invest in men.

One day I was in on a break at work and one of the developers (a man) said to me that I was taking the place of a whole family. I asked him how he could say that if there was a man instead of me he would be able get married and have a family! That is not encouraging and I think that our community must change this point of view.

The IT profession can be a most suitable career for women as there is a real flexibility. I think that women who are studying IT are increasing in Egypt.

We need to fill the gap between what we studied in college and what the market needs. We need more programmes specifically for women that are tailored and help them develop the skills needed in the market. Plus women should be open, share and help each other to learn the skills. Women should show a good commitment in their jobs.

Through Arab WomenPreneurs I am encouraging women to get involved more in IT as a career path or as tech entrepreneurs.

Please can you tell us more about Arab WomenPreneurs and the work you’ve done to set it up?

Arab WomenPreneurs came from a personal need to find an online hub for women entrepreneurs to join. I wanted to set up an online community where I could find like-minded women in order to help, support, facilitate and share knowledge.

I read an article in 2013 which said that women coming from maternity leave have a hard time getting back into the employment market as companies are afraid to hire them again after they’ve been on a break.

There is a need to increase number of women in technology. I believe that through technology and entrepreneurship we can solve a lot of problems that Arab Women face here in the region, as there is real flexibility in terms of time and availability.

Because of my background in computer science, I’ve been always interested to find the Arab women entrepreneurs in technology to serve as role model for others and encouraging them to convert their research into businesses that can solve problems we face in the region.

I founded Arab WomenPreneurs with a vision to “Build generations of Arab Women who think of entrepreneurship as a way of life.” I started working on the idea in the third quarter of 2014.

So, we’re introducing Arab WomenPreneurs as a hub for all women entrepreneurs and ‘wanentrepreneurs’ across the entire Middle East and North Africa (MENA) region: A place where we can connect, share, encourage, empower and work in partnership with each other. We’re on a mission to connect women with each other inside the region here, and expand to the rest of the world after that.

I believe if we have a hub for our region that represents women entrepreneurs, we can address our problems and difficulties and find new opportunities for all of us.

Numbers of women in my network are increasing. It is really promising and many places are hosting programmes on our online channel to target women entrepreneurs.

I was a partner in the “The Arab Women in Leadership and Business Summit” in September 2014. It was a successful event and was a great opportunity for networking between business women, young entrepreneurs and ‘wanentrepreneurs’ from the Gulf Cooperation Council (GCC) Countries, Tunisia, Libya, Syria, Sudan, Canada and the USA. We are strategic partner in “Arab Entrepreneurs Conclave” next year.

I was in contact with Deborah Reilly, the International Monetary Fund’s IT Chief and she expressed her interest in women in IT from the MENA region. There were good opportunities for women with IT skills who would like to take their IT career to the next level and join the IMF in Washington, DC.

We were a strategic partner in the “Mind of A Winner: Master your vision” event in Dubai in November last year. In the past three months we set up partnerships with Mice Quotient, The Meera Kaul Foundation, Executive-women.com and Identity Branding Forum for their events in Dubai.

We are working closely with start-ups founded by women. We are encouraging all women entrepreneurs to share their details with us as we are building a database to help spread the word about their services within the wider entrepreneurship eco-system worldwide.

We are working on our official launch that will be in first quarter of 2015.

How does the Arab culture regard female entrepreneurs?

Well, I started to think of opening my own business was when eighteen years old. I decided to carry out research to find a business idea for my graduation project that could later become an IT company. At that time I felt like I was the only one who thought that way – either students or the within community.

In the last ten years, there wasn’t high awareness about entrepreneurship, either male or female. A few years ago, the awareness started increasing about the value of entrepreneurship for our region, but I can say that 2014 was where great support for entrepreneurs really started.

In Dubai, there is excellent support from the government for women to found their own business and there are competitions to provide the basic elements for female entrepreneurs. Like Ro’ya from Dubai Business Women Council / MasterCard and Hadafie from Potential.com. The Arab culture is still developing with regards to female entrepreneurs, as we don’t get great support from the Arab men in our communities.

Arab WomenPreneurs is a strategic partner in “Women in STEM Conference Hackathon Awards” being held on 14th – 15th Jan 2015 in Dubai. The Hackathon is the first for women in Dubai.

We are also a partner in the “Economic Identity of Business Women in the Arab World Convention and Exhibition” taking place between 19th – 21st January 2015 and we’re a strategic partner in “Arab Entrepreneurs Conclave” which is being held from 23rd – 24th February 2015.

I am working on a leadership program to be launched in the second quarter of 2015 and I plan to launch few workshops for women during the year. I’m working on my PhD proposal to join a scholarship as I hope to hold my Ph.D. before being 30 years old.