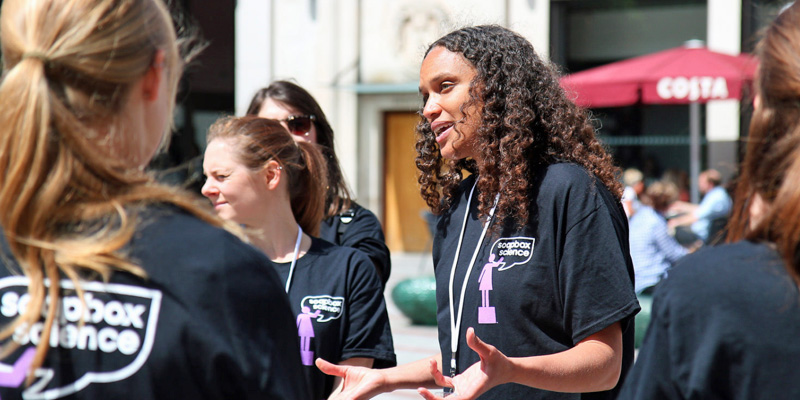 Dr. Safi Darden is a lecturer in psychology in the Centre for Research in Animal Behaviour at the University of Exeter. She conducts research on social behaviour mainly in non-human animals. Safi studied in the US and Denmark before coming to the UK.

Arriving at psychology via biology and zoology

I came into psychology via biology and zoology. From very early on I knew I wanted to work with animals and as a kid I took every opportunity to learn about them. This ranged from watching animals for long periods of time from a hiding spot up a tree to dissecting anything dead that I found!

As I approached my teenage years and had more autonomy, I started to hike out into the forest and fields with my sleeping bag and spend nights watching and listening for animals. Throughout my undergraduate studies at Cornell University and later during graduate studies at the University of Copenhagen, I took every opportunity to pursue research questions that would get me out into the field.

So, I was back in my sleeping bag spending my nights observing beavers, tawny owls and finally for my M.Sc. and Ph.D., swift foxes. I felt that it was important to observe my study species in their natural environment and to design experiments that could be carried out in situ.

I continued this in my post-doctoral work at the Universities of Bangor and Exeter, although now with diurnal, freshwater fish! Currently, I mainly ask questions best suited for the lab, with follow-up work in the field, and have become particularly interested in the processes that underpin social decision making.

As a lecturer, I have many roles. I am a researcher, an educator, an academic tutor and mentor, as well as holding an administrative role. In a typical day, I will meet with students that I supervise to discuss their research – plan studies, discuss data and analyses, chat about short-term and long-term research and career plans, talk over new studies that have been published, etc.

I will also work on writing manuscripts for publication and proposals to secure funding for research. During teaching terms, I lecture to groups of students ranging from 30 to 300, depending on the type of module. Throughout the year, I attend research group meetings where we discuss ongoing work and research seminars with external speakers.

There are also meetings related to my administrative role as Athena SWAN and Inclusivity Lead for the Psychology Department. I spend time in the lab with my students throughout the year and once or twice per year I get out into the field.

My primary work is with non-human animals and before coming to Exeter I was based in bioscience departments. Since joining the psychology department where we have many strengths in human psychology, I have found that we are interested in so many of the same phenomena.

Although our approaches to studies (how we ask questions) can be very different, we can quite readily talk across our sub disciplines and inform and inspire our work in this way.

The role of gender in the animal world

Gender, or biological sex as we normally use in non-human animal research, is often a key component of studies of animal social behaviour. Either because this is central to the research question or because we need to classify behaviours by the sex of individuals engaging in this behaviour.

The sexes can differ in their behaviour by either small or large amounts within the same species based on a number of external and internal factors that influence selection over the course of evolution and development throughout an individual’s lifetime. I have become particularly interested in how sexual conflict influences social behaviour.

Conflict occurs between the sexes essentially when they ‘disagree’ over the timing or rate of reproduction and can lead to one of the sexes (usually the male sex) trying to manipulate the other to push the mating rate towards their own optimum.

In my main study species, the Trinidadian guppy, as well as many other sexually reproducing species, this leads to males spending a lot of their time trying to encourage or coerce females to mate with them. I have found that male behaviour in this context leads females to alter how they interact with other females in the population – they become more aggressive and less likely to form stable social bonds.

This is likely to be quite costly for females as we know from studies on humans and a myriad of other animals that social bonds are important for health, survival and well-being.

I think Soapbox Science provides an incredible platform for bringing female scientists into the spotlight in a positive way and for providing opportunities for inspiration. Soapbox Science co-founder, Seirian Sumner, was one of my earliest role models and sources of inspiration when I first began my graduate studies, so when she asked me if I would be interested in organising Exeter’s first Soapbox Science event in 2015 I immediately hopped on board!

One of the terrific features of the event is that it offers tasters of a broad array of disciplines in a very accessible way. To someone who is potentially interested in pursuing a career in science, but unsure of what they might do, this is an opportunity to start exploring. I truly feel that the more they then explore, the more intriguing things will get!

Psychology tends to have a gender balance skewed towards high female representation at undergraduate level. Unfortunately, this drops off severely with increasing seniority as in so many other disciplines in and outside of academia.

I like to think that all the big and little things we are doing to change what has been the status quo for so many years are paying off. We need to change our practices within academia and importantly, we need to keep the public informed and encourage their support so that we can stem the loss of current and future generations of female scientists and with them, the incredible talent they bring to their fields.

A glorious day for women in STEM

Over the next few months, I am working with collaborators towards securing funding for exciting new lines of research in non-human and human systems and leading on inclusivity initiatives for my department. I will also be working with my first Ph.D. student toward the completion of her thesis and delving in to some exciting analyses of experiments that are coming to an end.

Oh and of course – spending a glorious day in a square off of the Exeter high street with my co-organiser, Dr. Ana Neves, 12 amazing speakers, 20 dedicated volunteers and a myriad of invaluable people who help to make this event such a success each year!