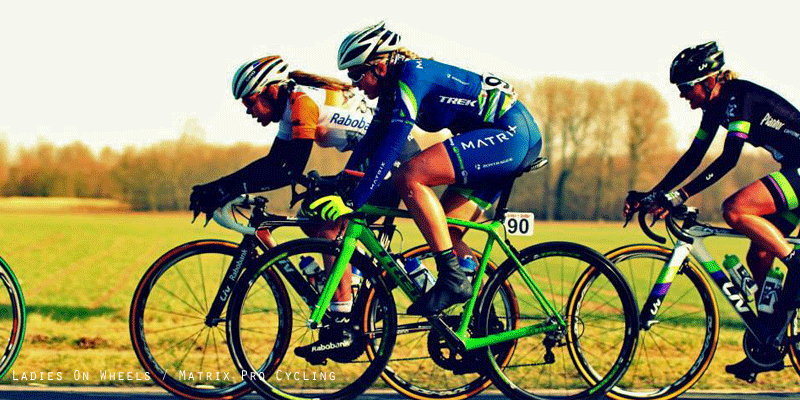 Stefan Wyman is a cycling coach, agent and owner of the Matrix Fitness Pro Cycling UK women’s cycling team. Previously a rider himself, Stefan entered the world of team management in 2004, joining Team FBUK to support his wife, an aspiring professional cyclist, after her early career was let down by a lack of structure and opportunity in the sport.

Equal pay is perhaps the biggest debate point in women’s cycling. It’s amazing to me in 2016 that we are still discussing this after the Equal Pay Act was introduced way back in 1970:

The Equal Pay Act 1970 is an Act of the United Kingdom Parliament which prohibits any less favourable treatment between men and women in terms of pay and conditions of employment.

The most common misconception is that equal pay means equal income for male and female riders of equivalent standing, but that’s simply not the case and certainly not what I’d be campaigning for right now. Market forces should always be what determine total rider income including endorsements, start money, media rights, bonus payments, or ambassadorial deals. But salary, that’s what you get for going to work in the first place.

The second misconception is that when you exclude all of those other elements, people are campaigning for fully equal pay. Once again, that’s simply not the case. What is being called for by many, most, is the introduction of a minimum salary. The UCI [Union Cycliste Internationale], the sport’s governing body set that minimum figure for men in the two levels of professional racing created by them, as follows:

Why a minimum salary is need

Introducing a minimum salary wouldn’t be without consequences or huge amount of issues. It also wouldn’t fix the multitude of challenges facing the sport, its stability or its growth, but it is very much needed, and needed right now; it’s 46 years since the Equal Pay Act. I’ve always felt that given a structured legal challenge, it would be hard to uphold the current situation, in any country.

The clear consequence of introducing a minimum salary would be a reduction in ‘professional’ teams. (Now by ‘professional’, we mean teams registered with the UCI because, as we’ve already established, ‘professional’ doesn’t exist…) This excuse of reduced teams is often rolled out when defending the delays in bringing in basic rights in the regulations that govern our sport. Would this be a severe consequence, and what would happen in practice?

Currently there are 40 UCI registered teams. All teams have a minimum of eight riders each, and a huge number of those riders receive no salary, some pay for their own equipment, and many make and fund their own travel arrangements to races.

If we introduced a two tiered registration system for women’s racing, with World Tour as a division 1, and Continental (non-professional) as a division 2, we firstly have a structure that closer reflects that of the men’s side of the sport.

We would need, eventually, 18 to 20 teams in that top division. So in theory, we have 22 ‘spare’ teams right now. It’s another misconception that these 22 teams would disappear, forever, and with them take away the dreams and opportunities of many of the riders in the sport. They could simply move in division 2, a division that more accurately reflects their budget.

There wouldn’t be a minimum salary in this division, meaning no changes for the team other than perhaps a reduction in establishment costs, no loss to the sport, or riders. It would create a clear structure for riders, race organisers, sponsors, and perhaps most importantly, fans.

Earning its place is the greatest chicken and egg situation we have. With ‘professional’ races largely contested by amateur riders, it’s not difficult to see why the sport is confusing for some fans. What can’t be denied though is the potential of the sport for all stakeholders. The women’s side of the sport and its growth could also hold a key to further investment for men’s cycling, and even for federations around the world.

So what is the biggest key to this change? In my opinion that’s a minimum salary. We need a line in the sand, we need a number, and we need a start date, because it’s that date that will give us the launch of women’s cycling 2.0. Until then, our amateur sport will not reach its professional potential. We will always be judged unfairly, and one thing we are most certainly not seeing is equal pay.