Elin de Zoete is managing director at PLMR, one of Britain’s fastest growing political lobbying and media relations companies. As managing director, she is responsible for leading the team, as well as providing senior counsel and strategic advice to clients across the business. Elin is a Member of the Institute of Directors and Women in Public Affairs, holds a Master’s Degree in International Development from the LSE and achieved First Class Honours at UCL in Politics and East European Studies. 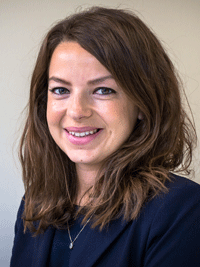 “…Despite significant progress being made at the last General Election in 2015 – when we saw 191 female MPs elected, up 48 from 2010 – women are still underrepresented in Parliament and across politics. Currently only a third of MPs are women, despite making up more than half of the population…  If our Parliament is to be a truly representative body, surely we need to do more to address that deficit…”

Elin, please can you tell us about your career to date and what made you want to work in public affairs?

I’ll be honest, when I was finishing university I didn’t know what I wanted to do. I chose my degree in Politics and East European Politics at UCL because I loved current affairs and was fascinated by Russian politics and history. To give myself a little more thinking time I then did a Masters in International Development Studies at LSE, which was a bit of academic indulgence, but it was super interesting.

Throughout my degrees and in a gap year I always ensured I was doing lots of work experience around my studies, trying out journalism, politics, charities and campaigning groups. I certainly didn’t know a lot about public affairs and what it was at that time, but while I was interning at SERA, the environment campaign affiliated to the Labour Party, I went to Labour Conference with a mission to find a job. After some intensive networking over beige buffets I came back with a handful of business cards and went about my follow up.

One was a public affairs agency called PLMR, who had an opening at entry level for an account executive, to join their team of five chaps. I researched the company, wrote to the brilliant founder, Kevin Craig, and then went to an interview a few weeks later … and the rest is history. Eight years later I am managing director of that very firm. I am proud to say that we have grown exponentially, we have won all of the coveted industry awards and we now have offices in Westminster and Edinburgh and a brilliant team of consultants in both.

What does your role at PLMR involve on a day to day basis?

PLMR offers both public affairs and media advice to clients across a breadth of sectors, so that means that the type of work we do day to day varies enormously. In one day I might be providing high level crisis media advice to an organisation who are being threatened with negative press, while also developing a lobbying campaign to convince the Government to change taxation for another client.

We work with business and charities in education, healthcare, food and retail, energy, infrastructure, tourism, finance, tech and more, so you have to be ready to quickly absorb yourself in a policy area and in the issues that businesses are facing. There is never a dull moment and the variety means that you are constantly challenged.

Please can you tell us more about your membership of Women in Public Affairs and the work of the organisation?

Women in Public Affairs is an amazing organisation that was set up by Laura Gilmore and Ella Fallows, who noticed that there was a real lack of representation of senior women in the industry, despite women being well-represented at the junior level. As senior practitioners they wanted to do more to encourage and inspire women to stay in the sector and smash through that glass ceiling.

Women in Public Affairs has grown to be a formidable force and they hold regular events and mentoring sessions which bring together women to network, support each other and seek to find solutions to some of the challenges that females face in public affairs.

We’re all aware that women are underrepresented in UK Parliament and politics more broadly, but what is the extent of the problem?

Despite significant progress being made at the last General Election in 2015 – when we saw 191 female MPs elected, up 48 from 2010 – women are still underrepresented in Parliament and across politics. Currently only a third of MPs are women, despite making up more than half of the population. As Maria Miller MP has noted, there are more men in Parliament now then women that have ever been elected as MPs. If our Parliament is to be a truly representative body, surely we need to do more to address that deficit.

The Boundary Commission is currently reviewing constituency boundaries in England. What is this all about?

The stated aim is to reset the boundaries so that constituencies are more ‘fair and equal’ in size, with each having no fewer than 71,031 electors and no more than 78,507. However, the proposals have caused a furore in the Labour Party. Critics argue that the boundaries have been drawn to favour the Conservative Party as Labour currently have more seats with fewer constituents, so would be hit harder. The Conservative Party argue that the proposals will make things a lot fairer come election time.

The Boundary Commission for England is leading the work around where the new lines should be drawn in England and will report back to Parliament in September 2018. Their initial proposals are live right now and you can check out all of the details here, including how your area is impacted. You only have until 5th December to respond though, so you need to be quick!

What are the potential implications for gender balance and how do we ensure the situation gets better rather than worse?

With the number of seats in Parliament set to reduce, if the Government gets its way and the plans come to fruition, then there is a real risk that gender equality gets worse, rather than better, as existing MPs are pitted against one another for consolidated seats.

It isn’t yet clear what the selection process will be but the Women and Equalities Select Committee in Parliament have been concerned that women might lose out, so they have been taking evidence on the subject and exploring what proactive measures can be put in place to protect and enhance the representation of women in Parliament. Professor Sarah Childs is just one academic who has set out an ambitious reform agenda for how Parliament could become more representative and inclusive.

What is your advice for women who’d like to get more engaged in politics?

If you work in public affairs, then joining Women in Public Affairs is a no brainer! But if you want to work directly in politics and have an aspiration to become an MP, reach out to your local Member of Parliament and ask to have a chat. Within all of the political parties there are women’s movements, who should embrace you with open arms. All of the political parties understand that they have a ‘women problem’ and they need to be attracting the MPs of tomorrow into their parties today.

What is coming up next for you, PLMR and Women in Public Affairs?

It is always busy as we run up to the festive season and we have our fingers crossed for the Public Affairs Awards next week, where PLMR is shortlisted in three categories. However much lands on my desk though, I will always find time to support Women in Public Affairs with the hope of encouraging more women in the industry.