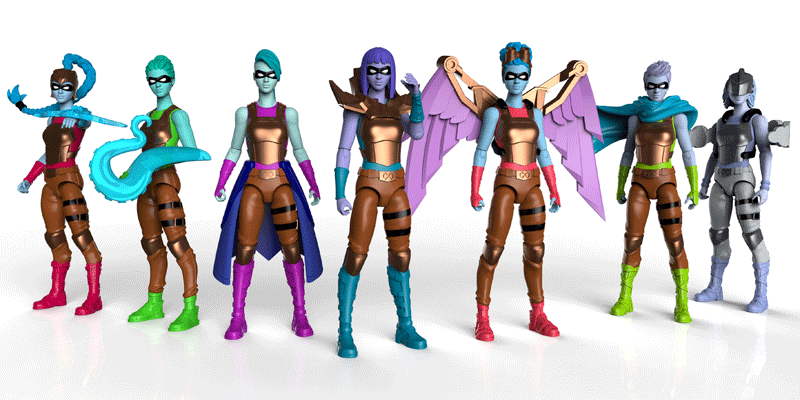 IAmElemental was founded in 2013 by two moms after they became frustrated by what they saw, and didn’t see, in the toy market. The IAmElemental team mission is to create toys for play experiences that allow girls (and boys) to envision themselves as strong, powerful and connected beings at the centre of a story of their own making, creating female action figures with realistic body shapes. After a highly successful launch on Kickstarter in May 2014 which raised $163,000, the IAmElemental Team shipped their Series 1 (Courage) to customers in all fifty US states and six continents, and they have just launched their second series of female action figures, the Wisdom Warriors. 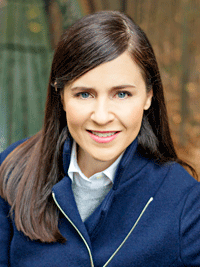 “…We are very pleased to be a ‘girl targeted, boy inclusive’ company. As the mom of two boys, I always say that it’s just as important to put a strong, healthy female action figure in a boy’s hand as it is a girl’s. If we want to promote gender equality we can’t only educate half the population…”

How IAmElemental came about

IAmElemental was born out of a question: Why does Spiderman appeal to a boy of four and a man of forty, but there is no female equivalent? This was back in October of 2012, long before the current cultural zeitgeist that has made female action heroes so popular right now. IAmElemental’s birth was at the forefront of this movement. I was reading a lot of developmental psychology at the time: Angela Duckworth, Paul Tough, Jo Ann Deak, and I literally woke one morning and said, “I know the answer – it’s not superheroes, it’s superpowers!” 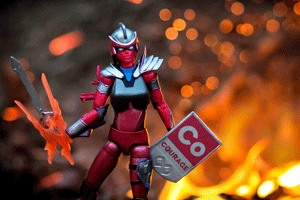 With IAmElemental, we set out to do three things. First, we created a figure with a healthier breast-to-hip ratio. As we like to say, “Less Hooters, More Heroine.” Second, we reinvented the superhero myth. In the IAmElemental universe you are the superhero, and the figures are the personification of your powers. Using the periodic table of elements, rebranded as The Elements of Power, we say that all the superpowers you could ever want or need are already inside of you. The figures represent the building blocks of those powers.

We don’t dumb it down, we break it down into digestible bits and embed a message of empowerment in an awesome female action figure. And, making them awesome – forward-thinking in their design and engineering – is the third thing that we did. Because, if they aren’t really cool and fun to play with, then what’s the point?

Starting up by bootstrapping

IAmElemental is a self-funded, bootstrapped start-up. I still work from my dining room table in New York City, but that isn’t the only place anymore. I joke that my WIFI hotspot is my office and I work wherever I happen to be. My COO, Veenita Bleznak, works from her dining room table in Philadelphia. My designer is in Cincinnati. My factory is in China. And my warehouses are in California, New Jersey and, I am thrilled to report, the UK!

Reaction from parents and children 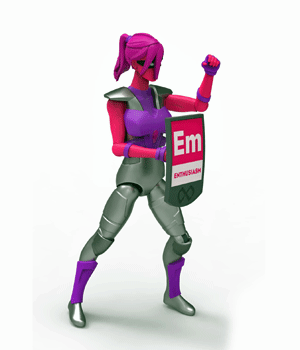 The reaction to our fierce female action figures has been wonderful. Parents love what IAmElemental represents. As we like to say: “It’s character, not characters.” The figures generate a lot of great conversation about powers, and how to use them. We always say that we are not anti-doll or anti-princess, but that if you give a girl a different toy, she will tell a different story.

We are very pleased to be a ‘girl targeted, boy inclusive’ company. As the mom of two boys, I always say that it’s just as important to put a strong, healthy female action figure in a boy’s hand as it is a girl’s. If we want to promote gender equality we can’t only educate half the population. We believe that if you change the way kids play, you can change the way they think – about themselves and the world around them.

Kids love creating stories with the IAmElemental action figures. However, it’s not just parents and kids who love IAmElemental. We are lucky to have a very broad audience. Our customers include grandparents, teachers, play therapists, and a very kind and loyal group from the supportive collector community as well. Girls, boys, men, women, everyone who comes into contact with our product finds something to love about it.

I am especially proud of the outreach we’ve done this year. Our buy one / donate one programme has already put 500 (and growing!) Courage figures in the hands of kids with cancer to honour the memory of fourteen-year-old IAmElemental super fan, Anna Bosma. They serve as a talisman and source of strength during a difficult time, and we are so grateful to be able to do this.

IAmElemental was born to start a conversation about the hyper-sexualisation of the female action figure, and the empowerment of girls (and boys!). And we are thrilled to see that larger manufacturers have joined our conversation and helped to move the needle even further faster than I ever imagined possible.

We were invited to the White House this past April for a conference on gender, media and toys, and it was incredible. We were in a room with the top companies in the world, all of us talking about the very things that form the core of the IAmElemental mission.

Why hyper-growth was not for us

We chose to stay self-funded for a reason. We deliberately decided that the hyper-growth model was not for us. Once a child has IAmElemental in her hands, she (or he) loves it. However, without a cartoon or film to accompany the figures, we knew that if we were up on the shelf next to a Frozen doll in a big box store, no one was going to pick the toy they’d never heard of.

Instead, we went direct-to-consumers via an online shop, and placed our product in specialty retail stores; independent toy stores, comics stores, and bookstores, where we’ve done really well. We recently landed on Amazon – including placing our newest series of Wisdom Warriors on Amazon UK – after we realised that third-party retailers were selling our product at grossly inflated prices. Whilst we can’t control the existence of the third-party retailers, we don’t want our customers overpaying for IAmElemental! As our brand awareness continues to grow, so will our distribution.

We were just announced as TOTY (Toy of the Year!) finalists in two categories: Action Figure of the Year and Rookie of the Year. TOTY is Oscars of the toy industry. We are very grateful for the recognition because it will help to spread the word about IAmElemental.

Releasing the second series of figures 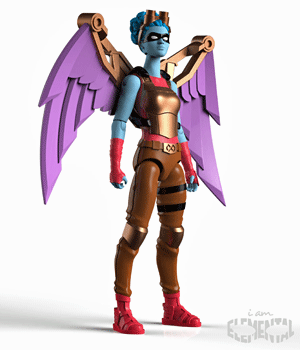 We just released Series 2 (Wisdom). As proud as I am of Series 1 (Courage), I am madly in love with these figures. They represent the building blocks of Wisdom: Creativity, Ingenuity, Curiosity, Logic, Exploration, Mastery, and Oblivion. We say, “Real heroes walk among us,” so we use a real life muse for every series.

Joan of Arc was the muse for series one, and the ancient Alexandrian philosopher, astronomer and mathematician, Hypatia, is the muse for series two. She was a STEM superstar before STEM was even a word, and we had a great time incorporating both her ancient Greek feel and her intellectual interests into the design of the figures.

Additionally, now that we are more comfortable with the technical aspects of designing action figures, we were really able to push things forward creatively, and produce figures that improve upon what was already a pretty wonderful product.

I have two bits of advice. First, my boys are big fans of the Discovery Channel show, MythBusters. One of the hosts, Adam Savage, popularised the saying: “Failure is always an option.” I would urge anyone thinking about entrepreneurship to embrace that motto and learn to love it. Because, even if your business endeavour ultimately succeeds, there will be failures along the way. It is unavoidable.

We make what I call “rookie mistakes” all the time. The key is flexibility, and the ability to brainstorm your way out of a problem. I feared failure my whole life. This fear served me well in a lot of ways. But, it doesn’t make for a good entrepreneur.

Second, my team has really come to embrace entepreneur, Gary Vaynerchuk’s motto: “One is greater than zero.” Celebrating every single accomplishment – no matter how small – keeps us fortified on the tough days. So long as you’re moving in the right direction, no matter how slow, you’re moving. And that is something to celebrate. 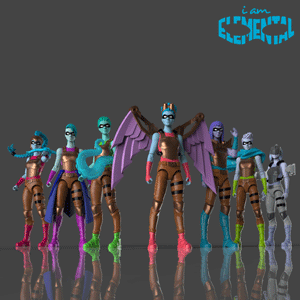 IAmElemental is thrilled to have finally been able to set up a warehouse in the UK and bring a portion of our new Wisdom series across the Atlantic. We have a wonderful customer base here, and whilst we have always shipped worldwide, costs were sometimes prohibitive.

We look forward to growing IAmElemental’s UK business in 2017 and beyond and we are so pleased to be able to deliver Wisdom to our UK audience without having to ship it internationally. In addition to continuing to take orders via our online shop at IAmElemental.com,we recently acquired our first UK retailer – afteralice.co.uk and we hope to have a growing UK roster as we head into the New Year.

The next figure in development is the 6 ½ inch Core Power Wisdom figure. Every IAmElemental series starts with seven 4 inch figures and then culminates with the larger Core Power figure. After that, we move on to Series 3 (Justice), with a whole new muse, and a whole new look. At the same time, we are going to be turning more attention toward content development.

We’ve had a lot of inquiries, but I refuse to create content for content’s sake. IAmElemental does very well with child-generated content creation. If we are going to tell IAmElemental stories, they have to be as wonderful, smart and empowering as the ones that kids are already telling on their own.

By way of a thank you for all the support we have received from Womanthology readers since we launched back in 2014, we are offering a 15% discount via our online shop (iamelemental.com) until the end of 2016. Please use CODE:WOMANTHOLOGY