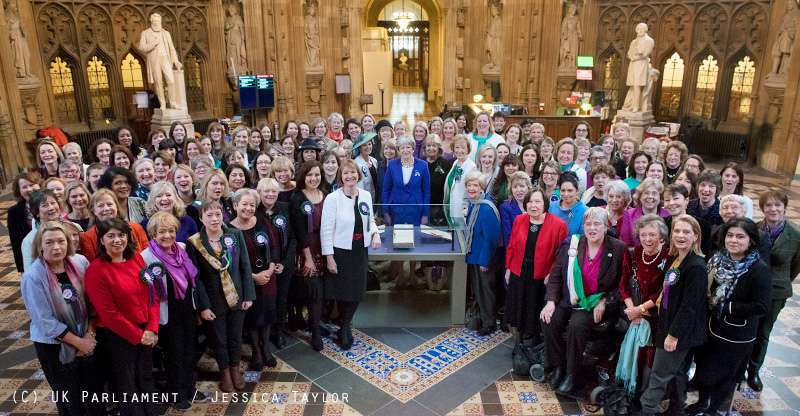 Dr. Mari Takayanagi is a senior archivist at the Parliamentary Archives, where she has worked in various roles including public services, outreach, preservation and access. ‘Vote 100’ is a large project celebrating 100 years of the Parliamentary vote for some women and all men in 2018, and Mari is currently joint project manager and co-curator of Parliament’s Vote 100 Exhibition Project. 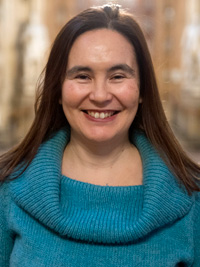 I’m a senior archivist in the Parliamentary Archives, working in the Public Services & Outreach team. The Parliamentary Archives hold the historic records of the House of Lords and House of Commons going back more than 500 years. My role involves managing the reading room and the enquiry service, helping people to do their research; and also outreach, publicising the archives via exhibitions, displays, publications, webpages, social media, community projects and more. 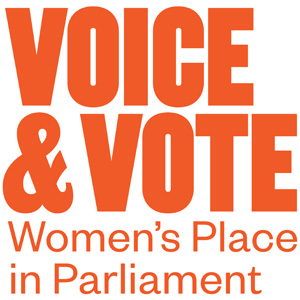 The exhibition now has a title – Voice and Vote: Women’s Place in Parliament. It will be open to the public 27th June – 6th October 2018. It will cover the full story of Parliament, women and the vote over the last 200 years, using immersive spaces and interactives to re-created historic spaces used by women in the Palace of Westminster.

The exhibition will include some very splendid and important items from Parliament’s archives and works of art collections, as well as some key loans from elsewhere which we’ve been working to finalise. We were very excited to announce our first star loan recently – the Alice Hawkins collection!

Alice Hawkins was a working-class suffragette from Leicester, a great new statue of her was unveiled there in February. Her family still hold her wonderful collection of Women’s Social & Political Union suffragette memorabilia, and it’s never been displayed in public before.

We always knew that 2018 would be a big year, but so far, it’s been even bigger than we anticipated. 6th February 2018 marked the 100th anniversary of royal assent to the Representation of the People Act 1918, and the reaction from the public, the media and on social media to this was incredible. 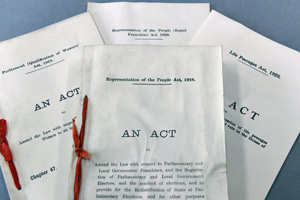 We displayed the original Act from the Parliamentary Archives for one day only, together with three other Acts with anniversaries to celebrate in 2018, and more than 100 female Parliamentarians including the Prime Minister and Harriet Harman (‘Mother of the House’) turned up to view it – lots of them dressed in purple, green and white, and all very excited and engaged to see the Act.

We had BBC Radio 4’s Today programme and BBC Breakfast weather broadcasting live from Parliament in the morning, plus news programmes throughout the day – I was live on the News at 6 with Andrea Leadsom (Leader of the House of Commons), which was very exciting! And of course, what was happening in Parliament was only the tip of the iceberg, as people all over the country celebrated in a huge variety of events in different ways.

It’s often forgotten that approximately 40% of men were unable to vote before 1918, this was because of residence and property qualifications. Men who moved around a lot, such as soldiers, sailors and students, didn’t meet residential requirements; the poorest in society didn’t meet the property qualification, along with men who lived in other people’s houses, such as adult sons living with parents.

There was an Adult Suffrage movement before the First World War, campaigning for all adults – men and women – to have the vote, and some women’s suffrage campaigners were also strong supporters of adult suffrage – Sylvia Pankhurst, for example. 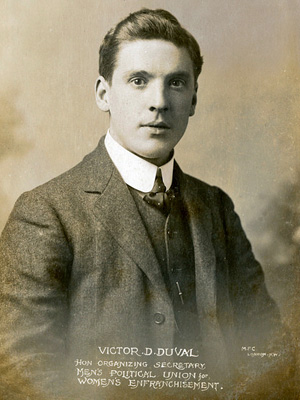 Many men supported the women’s suffrage movement – as well as men like Frederick Pethick-Lawrence, who were militant campaigners, there were sympathetic MPs such as Keir Hardie, George Lansbury and Willoughby Dickinson who opposed forcible feeding, asked questions in the House of Commons, and introduced suffrage bills. You can find out more in our online exhibition Suffragettes in Trousers.

The first women eligible to vote

The Representation of the People Act 1918 enabled the first women to vote in Parliamentary elections in the UK and Ireland in the general election of December 1918. These were women over the age of 30 who met minimum property qualifications. It was complicated, but basically you (or your husband) had to own or rent a dwelling house of any size – this might be a house, or a discrete part of a house like a maisonette – or live as a lodger in unfurnished rooms of a yearly value of not less than five pounds.

All this meant in practice that many women over the age of 30 were excluded because they were living at home with parents or other family members; female resident servants; or unmarried women living in furnished rooms or hostels. No women under 30 could vote, even though this excluded many of the young women who had done the most war work in factories, fields and farms.

Men, meanwhile, were able to vote from the age of 21, and indeed from the age of 19 if on active war service, although conscientious objectors were disqualified from voting for five years. Finally, women university graduates over 30 years old could also vote in their university constituency, which sounds strange today! 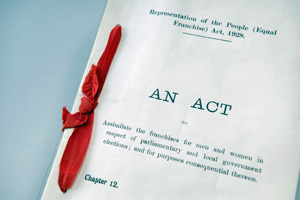 It took another ten years of campaigning by women’s suffrage organisations before all women were given the Parliamentary vote on the same terms as men by the Equal Franchise Act 1928. This removed all the special age and property qualifications, and meant women, like men, just had to be over the age of 21 which was the voting age at that time (it was reduced to age 18 in 1969). Women voted on the same terms as men for the first time in the general election of 1929.

How Womanthology readers can get involved with the celebrations 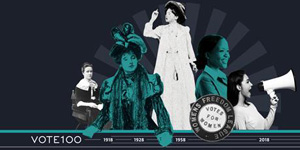 Womanthology readers are all very welcome to come to our Voice and Vote exhibition in London in summer 2018! But if you can’t visit London then no matter, there are plenty of activities happening all over the country. For a start, sign up for Equaliteas, a chance to discuss your right to vote over tea and cake, wherever you are, between 18th June and 2nd July!

You can find details of all Parliament’s Vote 100 activities here. Apart from that, to find activities happening near you look at Royal Holloway’s Vote 100 hub website and the Government Equalities Office 2018 events list.

Always something to commemorate

In November we’ll be celebrating the centenary of the Parliament (Qualification of Women) Act 1918, which allowed women to stand as MPs, and then the election of the first woman MP, Constance Markievicz (who as a Sinn Fein MP never took her seat in Parliament), in December 1918. 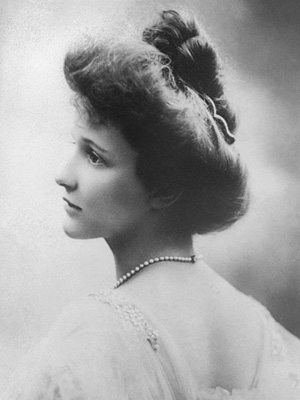 Nancy Astor, the first woman to take her seat in Parliament

Then once we hit 2019 we’ll be marking the 100th anniversary of Nancy Astor becoming the first woman to take her seat in Parliament, and the centenary of the Sex Disqualification (Removal) Act 1919 which allowed women to enter professions such as law – there are several projects marking this including the First 100 Years.

2019 also marks the 200th anniversary of the Peterloo Massacre, a really important event in the history of Parliamentary reform. Basically, there’s always something coming up to mark, celebrate or commemorate, which is incredibly important, and I wouldn’t have it any other way.