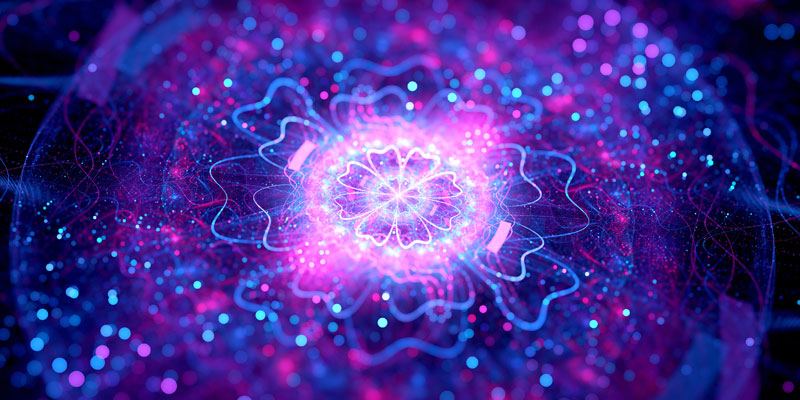 Francesca Day is a researcher in the University of Oxford Department of Physics. Her work involves looking for hints of dark matter in observations of the Milky Way and other galaxies. Francesca is proud to be a second generation Soapbox Science speaker, as she is the daughter of Ottoline Leyser, one of the first ever Soapbox Science speakers. 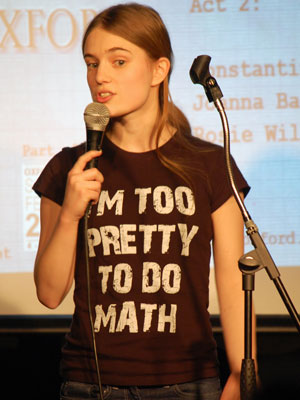 Francesca spoke at the London Soapbox Science event on 30th May 2015. The title of her talk was: “Hunting for new particles with physics fan fiction.”

I have known that I wanted to study physics for as long as I can remember. Physics asks and answers the most fundamental questions about the physical universe – what can compare to that? I studied Natural Sciences, specialising in physics, at Cambridge, and then moved to Oxford for my DPhil [Oxford University term for a Doctor of Philosophy].

One turning point in my career was participating in the CERN [The European Organization for Nuclear Research] summer student programme. The Large Hadron Collider at CERN is a truly inspirational experiment, pushing forward the boundaries of particle physics by colliding protons together extremely fast!

My time at CERN cemented my resolve to pursue research in particle physics – although I decided to go down the theoretical route rather than working on the experiments themselves. A couple of people actually tried to convince me that I should pursue something “easier” than particle theory – I’m very glad I ignored them!

Dark matter and how it impacts on our lives

By observing the motion of stars and galaxies, astronomers have come to a puzzling conclusion. It seems that to explain how fast they are moving using gravity, there must be a lot more matter in the universe than we realised – matter that we can’t see. We call this “dark matter”.

Dark matter cannot be made of any of the particles we have found so far – there must be some new particles out there waiting to be discovered. We owe our very existence to dark matter. Without it, stars, galaxies and planets would not have formed.

Unlike some fields of science, particle physics does not have immediate applications to policy or technology. However, such “blue skies” research is fundamental to progressing our understanding of the universe, which will ultimately yield huge benefits. So far, particle physicists have invented the World Wide Web and helped create new medical technologies such as PET [positron emission tomography] scanners. Who knows where our research will lead in the future?!

There are lots of competing ideas about what dark matter could be. I’m looking for evidence for or against some of these ideas in observations of galaxies and of our own galaxy, the Milky Way. In practice, this means working out what the consequences of a particular dark matter particle would be, and then comparing these to actual observations.

It’s a bit like “physics fan fiction” – a concept I’ll expand upon from my soapbox! My day to day work is primarily programming and reading papers and text books to keep up with current research.

Challenging the stereotype of science as being “for boys” 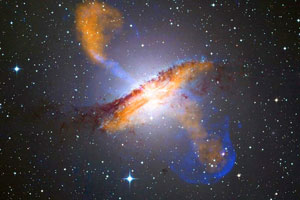 My department is certainly very male dominated! In general, I don’t find this too much of a problem – I’m used to it! However, I am perpetually frustrated by the media portrayal of science as “for boys”, and by the subconscious bias that still exists against female and BAME [black and minority ethnic] scientists. In particular, it seems that only a minority of the men in my department have really engaged with the issue of gender equality, which is disappointing.

Oxford physics has a very active women in physics society, as well as an equality and diversity committee who are trying to change the culture. But it’s slow going!

There are many factors at work here. Gender stereotyping starts from the moment of birth – it affects what toys children are given and how they are encouraged to play and learn. There’s a great organisation called Let Toys be Toys who campaign against the frankly ridiculous level of gender stereotyping in children’s toys.

Science and construction toys are often marketed exclusively at boys – so girls are discouraged from pursuing science from a very young age. I hope that changing this will increase the number of girls studying physics further down the line.

The end of the world as we know it: Taking to my soapbox to increase the visibility of women in science 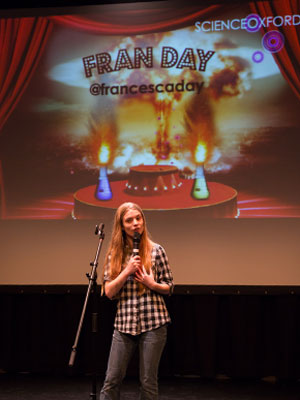 Francesca Day performing at the Science Cabaret in Oxford

I love science communication – getting people interested in my favourite subject is incredibly rewarding. I also support Soapbox Science’s mission to increase the visibility of women in science. I’ll be talking about how theoretical particle physics is like fan fiction for the universe – we spend our time thinking up ideas for new particles, and then working out what the universe would be like if those particles existed. In this way, we are slowing uncovering the most basic building blocks of the universe.

I will also discuss the expansion of the universe, how the Higgs boson could be related to the end of the world, and why space is a good place to look for new particles.

Preparing for my Soapbox Science session

I attended a great training day by Soapbox Science, and since then have been thinking about how I can adapt talks and science comedy sets I have given previously to make them more interactive. I’ve also sourced a great prop that demonstrates the expansion of the universe! (Borrowed from another superb particle physicist, Kathryn Boast.)

My mum’s always a great help with science communication events – she has a lots of experience giving science talks to the general public, and can tell me if I accidentally get too technical!

I don’t shy away from tackling “hard” subjects such as particle phenomenology (physics fan fiction) and quantum field theory (our most fundamental description of particles in terms of fields covering all of space and time). Outside of physics, I am a stand-up comedian, so I plan to include a few jokes to bring the physics to life. I hope my enthusiasm for the subject will be infectious – my explanation of quantum field theory involves literally jumping around!

Particles, laughter, ideas. Do come along. Details are here.