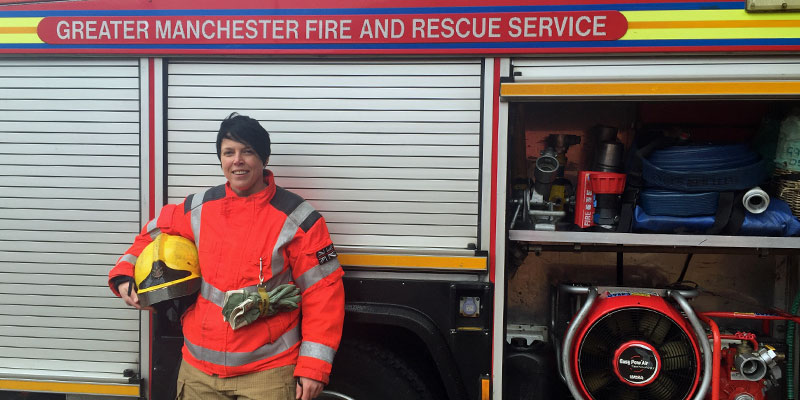 Micky Bland has been a firefighter for eight years. She is employed by Greater Manchester Fire and Rescue Service and she is based at Philips Park Community Fire Station in Manchester. Micky was in the Army prior to her career in the fire service.

“…everyone knows we fight fires but we do a lot more than that these days. We attend various rescues – water rescues, floods, road traffic collisions, people trapped in buildings or machinery, large animal rescues, rescues from height and assisting the ambulance service with some of its incidents … the list is pretty endless…”

I have been a whole time firefighter for over eight years now and I’m based at Philips Park Community Fire Station, close to Manchester City Centre. Being ex-Army, it was always going to be a natural transition to move to another uniformed service, but it wasn’t something I did straight away, so I guess it’s my one slight regret. The main reason I wanted to be a firefighter is probably the same as many … I wanted to help people. Sounds pretty cliché but it’s true.

So much more than fighting fires

Greater Manchester Fire and Rescue Service [GMFRS] is one of the largest fire and rescue services in the UK with over 2,100 members of staff and 41 fire stations. We cover an area of approximately 500 square miles and a culturally diverse population of 2.5 million people.

As a fire and rescue service, everyone knows we fight fires but we do a lot more than that these days. We attend various rescues – water rescues, floods, road traffic collisions, people trapped in buildings or machinery, large animal rescues, rescues from height and assisting the ambulance service with some of its incidents … the list is pretty endless.

We also do a lot of community work. We deliver ‘Safe and Well’ visits, which involve giving advice about fire safety and health risks, and we work alongside schools and educate the children on various safety themed visits. That’s just a small snippet of what I do in the fire service.

The women I was close to inspire me – my mum, my granny and my Aunty Isabel. I was brought up with my mum and have two older brothers. We never had a father figure so my mum pretty much did both.

In the summer, as a kid, I used to go with my mum, my granny and aunty to help pick potatoes and berries. That was it … every year, without fail! They never let me off! They were confident, feisty women and they didn’t take ‘no’ for an answer. I’ll tell you what though – all the women I met through my childhood working in those fields were all the same. They gave the men a run for their money when it came to ‘banter’.

As a kid, I found it hilarious but learnt a lot, plus I got money for helping out … an added bonus. I quickly learned that money didn’t grow on trees from a very young age – I had to get out there and earn it.

I come from a small town in Scotland, an old coal mining community, so once the pits closed down, the work pretty much dried up. My mum always said to stick in at school so I stayed at school to do my O-levels and Highers. When I left school I realised I had to find work but it wasn’t going to be around my hometown. That’s when all that ‘training’ kicked in and I ventured out to the big world on my own.

Chase your dreams instead of running from your fears

Throughout my childhood, two things spring to mind that I was told and they stuck with me throughout all my accomplishments and failures. The advice I would give is always chase your dreams instead of running from your fears and don’t give up, the beginning is the hardest. (I think they’ve probably been in a magazine my elders read or something but they certainly did the trick, not only in my career, but also my goals in life.)

Adrenaline rush and being part of a brother / sisterhood

It’s hard to pinpoint a favourite part when you love the job you do. No two days are the same and you never know what to expect. I would have to give you two parts, rather than one part.

For me, one part has to be that adrenalin rush you get when you do something out of the ordinary like going into a burning building. Although we are trained, not only to fight the fire but to stay safe and what to do if something goes wrong, it has that danger element. I joined to be a firefighter … I enjoy fighting fires. Also, as a firefighter, I work on a watch of seven with five in at any one time. We are a close watch, help each other out, and look out for each other. It has that family brother / sisterhood that sounds so pretentious and maybe a little geeky but it’s true.

I can’t say there is anything different [for male and female firefighters]. Every task that you have to achieve, every piece of equipment you encounter – there’s no difference for men or women. Nothing we do is defined by gender and no equipment is made for gender. Everyone in the fire service is an equal regardless of gender, sexuality, race or religion.

I have recently completed the gateway to become a crew manager so that’s my next chapter. As it stands, I’m awaiting a position so I can start my development in my new role. I have another 18½ years left before my retirement so I will continue to develop myself until then… As we say in the fire service, every day is a school day.

GMFRS recently recruited four female firefighters via an internal pathway, but we know there’s more to be done to truly reflect the communities of Greater Manchester. It is likely there will be opportunities in the future for further recruitment via our internal pathway which provides opportunities for people to join GMFRS, including the Prince’s Trust, apprenticeship programmes and volunteering opportunities.

Those that offer their time to the people of Greater Manchester through our schemes will put themselves in a better position to apply. GMFRS is currently recruiting for people to join a new team of Community Fitness Volunteers and people can find out more about this role by visiting: http://manchesterfire.gov.uk/working_for_us/become_a_volunteer/