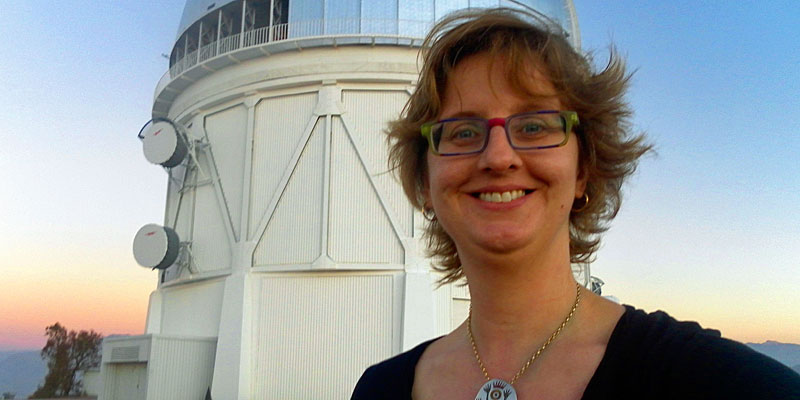 Dr. Kathy Romer is a Reader in Astrophysics at the University of Sussex. She is also an undergraduate careers tutor and coordinates the Physics and Astronomy Department’s participation in the Athena SWAN Charter (established in 2005 by the Equality Challenge Unit to encourage and recognise commitment to advancing the careers of women in science, technology, engineering, maths and medicine employment in higher education research). Kathy is a frequent commentator in the media about astrophysics. 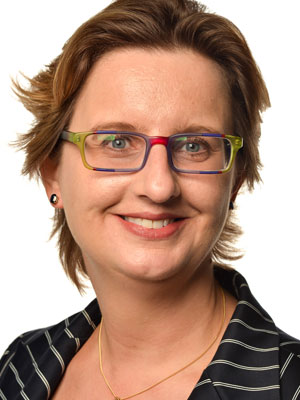 Kathy spoke at the Newcastle Soapbox Science event, which took place on Saturday 27th June 2015. The title of her talk was: “Dark energy – a cosmic mystery. Find out why we are going to the ends of the Earth to prove Einstein wrong, or right…or probably both…”

I can’t remember when I first wanted to be an astronomer, probably at five or six. But I also wanted to be the first female Prime Minister (Maggie put an end to that ambition!). As a teenager I assumed I’d go into medicine (that’s what people who were good at science at my school did).

In fact I almost didn’t take maths at A-level because it wasn’t needed for medical school and I wanted to take Art as my fourth subject. Fortunately I was persuaded to take Maths, because otherwise I wouldn’t have been able to take Physics at university. By the end of my first year at sixth form I knew that is what I wanted to do. Then, shortly before it was time to submit my UCCA (the old name for UCAS) form, we got onto the astrophysics portion of the A-level and I caught the bug.

I applied to the handful of departments that offered joint degrees in Physics and Astrophysics at the time. I got several offers, but Manchester clinched the deal by offering cream cakes at the applicant lunch…

It didn’t occur to me at the time that I’d do a Ph.D. [Doctor of Philosophy] afterwards, but as I approached graduation I realised that I wasn’t ready to stop learning about Astrophysics. I put in a few hurried applications and I ended up at Edinburgh working with a young postdoc, Dr. (now Professor) Chris Collins who was one of the few people in the UK to have access to data from a soon to be launched German X-ray astronomy satellite. Chris is still one of my most valued collaborators. He is also one of my best friends, and was best man at my wedding.

Living in America for nearly a decade: Lots of things I still miss 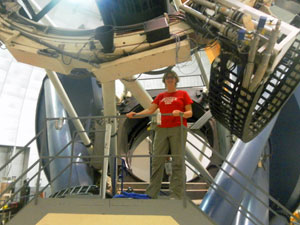 By the time I graduated with my Ph.D. in the mid ‘90’s, the astronomy job situation in the UK was dire. Pretty much everyone that wanted a postdoc went to the States. I lived in the US for nearly a decade, and there are lots of things about it that I still miss.

Typical things like water pressure and good customer service, but other less obvious things like their more rounded approach to higher education (compared to our obsession with early specialisation). But I don’t miss the extreme weather.

In the cities I lived in, you only got a few months a year when it wasn’t absolutely freezing or oppressively sweaty. In the winter I used to wear a huge silver down jacket. It was not very flattering. Once I was wearing it in a supermarket and some smart-alec shouted out: “Hey, do you work for NASA or something?!”, and I looked him straight in the eye and I said, “Yes, actually I do!”. Perhaps the best thing about being an ex-pat is that it’s easier to be eccentric – people assume you are different because you are foreign!

Urban legend – four years working on your Ph.D. and 40 years reworking it

My research is in the field of observational cosmology, with a specialism in X-ray studies of clusters of galaxies. There is this urban legend that people spend four years working on their Ph.D. and 40 years re-working it, and that is definitely true for me!

Like all British academics, I have lots of different roles, and research is just one of them. Fortunately I don’t find any of my roles boring, although it would help if I could clone myself so that we could make headway faster! For me the fun is all about solving problems, regardless of whether that is figuring out what happened in the early universe or how to persuade reluctant Freshers to learn how to programme.

Sometimes teaching and management gets in the way of research, sometimes the opposite. Likewise sometimes my personal life gets in the way of my job and sometimes the opposite. I find the key thing when defining success in both work and personal life is to take a long view, rather than to base it on what’s happening today. I work very hard a lot of the time but I am not a natural hard worker: as soon as the pressure is off you will find me in my PJs on the sofa watching bad reality TV.

The expansion of the Universe is speeding up – caused by ‘dark energy’? 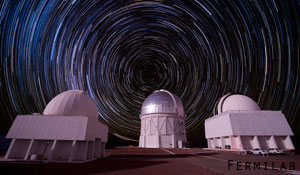 The universe is about 14 billion years old. Until about one billion years ago, its expansion was slowing down. Now it’s speeding up. This bizarre finding was announced in 1998, to widespread surprise. Since then the evidence for that acceleration has got stronger and stronger. Scientists believe it is caused by an as-yet-undiscovered ‘dark energy’.

The natural consequence of an accelerated expansion is a run-away expansion. In other words the Universe could literally rip itself apart in the future. Astronomers and physicists have joined forces to study dark energy. Once we know more about it we should be able to predict what will happen in the future.

I think physics as a subject is supportive of everyone regardless of ethnicity, gender, sexual orientation, or social background. However, my work related to the Athena SWAN Charter has opened my eyes to the fact that society in general does have prejudices.

I can’t say for sure why I ended up as a senior academic in a male dominated subject, but factors have to include the fact that my mother has a Ph.D. in a science subject, that I went to an all-girls high school that taught physics as a separate subject from Year 7, that I have a steady partner who works in (and so understands the demands of) the same field, and that I am (to put it mildly) a bit “weird”: My friends used to call me (fondly, I stress) “the mad professor” when I was at school.

Physics doesn’t need any more “mad professors” (male or female) – it needs the brightest brains from across the full cross section of society.

Through Athena SWAN I’ve come to realise that we – STEMM [science / technology / engineering / maths / medicine] females in Higher Education – can make a difference.

First of all, we are natural problem solvers and can come up with creative ways to enhance equality in society. Second, when we get that light bulb moment (as I have done) about the continued gender inequality in society, we become passionate about doing something about it.

I would never have applied to take part in Soapbox Science two years ago. Now I can’t wait until I take my place on the soapbox alongside female colleagues from life sciences, engineering, maths, and medicine.

Supersizing (and waterproofing) my table top demo of the expanding universe… 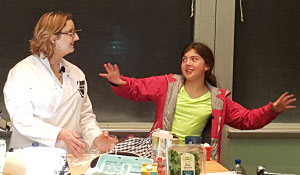 To prepare for my time on the soapbox I have been giving public talks to a range of different audiences, including kids, to see what sort of things work and what sorts of questions come up. I am also trying to supersize (and waterproof) my table top demo of the expanding universe.

I love chatting with kids and getting them to realise they already know stuff about the Universe. In a recent talk I asked a seven year old to predict how long it would take for a cup of coffee to cool down, then we tested her hypothesis by projecting a digital thermometer read out for the next hour. Believe or not that ability to predict the time it takes things to cool is fundamental to two of the main probes of dark energy.

Tyneside time travel. Here’s where and when to find us. It’s free and it’s for everyone!