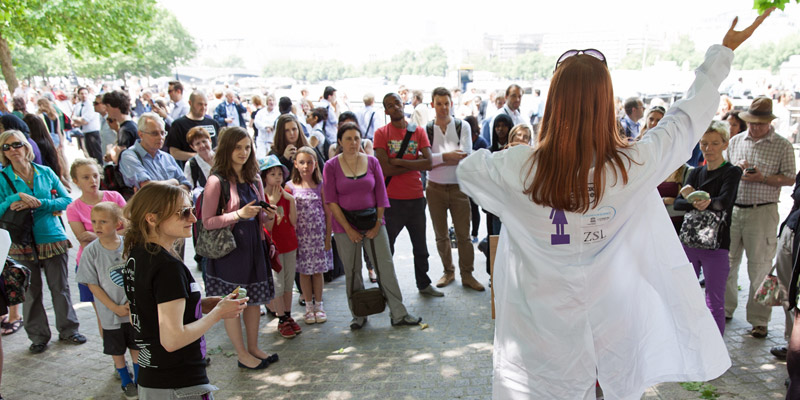 Dr. Nathalie Pettorelli is a research fellow at the Institute of Zoology, Zoological Society of London, where she carries out research on assessing and predicting the impacts of global environmental change on biodiversity and ecosystem services. Dr. Seirian Sumner is a senior lecturer in Behavioural Biology within the University of Bristol School of Biological Sciences where she carries out research on why and how social behaviours evolve. In 2011 they set up Soapbox Science as an annual public science communication event with a difference.

“…It took courage to stand out from the crowd: our idea was met with scepticism and raised eyebrows by colleagues and friends. We were told us that science outreach events with a gender equality agenda were never going to take off…”

Challenging the perception of who scientists are

In the run up to another International Women’s Day, it seems like a good time to reflect on the role of women in science. Six years ago, we co-founded Soapbox Science, a public outreach platform for promoting women scientists and the science they do. Our idea was simple: challenge the perception of who scientists are by putting female scientists on soapboxes on busy urban streets to chat passers-by about their science.

Our motivation was driven a series of personal experiences and realisations: (1) there are fewer and fewer female role models available in science as you progress up the career ladder; (2) sexism in science is alive and kicking, if you allow yourself to notice it; (3) science stories are mostly told by males; (4) celebrated science heroes are mostly males.

It took courage to stand out from the crowd: our idea was met with scepticism and raised eyebrows by colleagues and 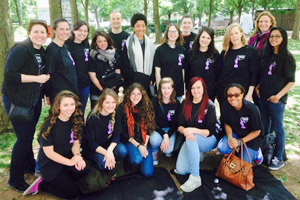 friends. We were told us that science outreach events with a gender equality agenda were never going to take off with the press and the general public, and that we’d not do ourselves and our careers any favours by speaking out about sexism in science. How wrong they were … six years later, we are not organising one but a dozen events across the UK, and 2016 sees our first international expansion, to Australia.

Having an idea is one thing, making it a reality is another

Having an idea is one thing, making it a reality another; neither of us had really gauged the amount of work and dedication required to achieve what we have achieved so far. It all started relatively easily, thanks to the support of the L’Oreal / UNESCO UK and Ireland For Women In Science programme, who agreed to sponsor our first event in London. Twelve fantastic female scientists, including Dr. Sue Black and Dr. Maggie Aderin-Pocock, generously gave us (and more importantly the public!) a bit of their time and agreed to stand on our soapboxes on a sunny afternoon on London’s South Bank.

The first event was a media success, which allowed us to secure more funding for a second event in 2012. That second 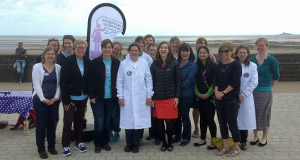 year was slightly more challenging: in true British style it rained for the duration of the event, and the media were less interested in covering something that was no longer a novelty. Despite these drawbacks, we managed to attract an enthusiastic crowd who gave us some great feedback; this contributed to securing the continued support of the L’Oreal / UNESCO UK and Ireland For Women In Science Programme for a third year.

Expansion to Swansea, Dublin and Bristol

Things really accelerated in 2014, when we expanded our reach by exporting Soapbox Science to Swansea, Dublin and Bristol. We had no funding available at this time to help cover the costs of these new events, as the only secured funding we had was for the London event. These three new events were thus made entirely possible thanks to the enthusiasm of our local organisers, who managed to find funds from their institutions and learned scientific societies to make it happen.

Another major challenge we faced in 2014 was the lack of an event coordinator, to help us manage the logistics of running four events in one summer. This meant that the two of us, who are full time scientists, had to shoulder the huge administrative burden required to ensure things ran smoothly, e.g. coordinating the applications by speakers, organise training events for speakers, field emails on topics ranging from how to build a soapbox, to sourcing banners and media materials, and filing expense claims for speakers.

That difficult year was however pivotal in helping us expand our initiative: 2014 demonstrated that there was an 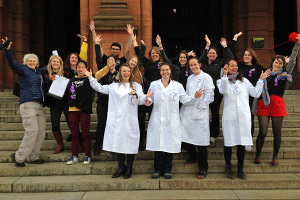 appetite for Soapbox Science events nationally, and that we had everything in place to sustain expansion. Using all the experience, media coverage and data we had collected so far, we applied for a large public engagement grant from the Science Technology Facilities Council (STFC): our application was successful, which meant that from 2015 onwards, we were able to employ an event coordinator and financially support any local team interested in bringing Soapbox to their part of the UK.

This level of support has made a huge difference to us in what we could achieve: in 2015, we brought Soapbox to seven cities around the UK, promoting the work of nearly 100 women in science. At this point, our initiative really started going places: Soapbox has now become a known brand for achieving wider participation of the general public with UK science, and is acknowledged alongside Athena SWAN as an equality initiative that promises to make a real difference.

In recognition of what we had achieved, we were given Points of Light awards by the UK Prime Minister. We were delighted to have this recognition after all the hard (and unpaid) work we’d put into Soapbox; and having a tweet for Soapbox via the PM’s social media channels was an extra boost! We were also excited to be identified as one of the top most innovative science outreach initiatives in the EU, by the Horizon 2020 EU programme.

After six years of exponential growth, national and international recognition, funding from UK research councils you’d think Soapbox Science has landed, and its future secure. We’d love to say this is true. However, funding options for large scale science outreach programmes open to academics who wish to remain as active scientists are extremely scarce, and always short-term.

Small grants are always available to support the running of a given local event, but the running of Soapbox Science as a whole now requires dedicated staff to coordinate activities, ensure a certain level of quality control, and promote further expansions. We are still to find a model that allows us to secure the long term financial viability of our initiative and promote its expansion.

Taking Soapbox Science from strength to strength around the globe

It’s been a labour of love for science, and commitment to achieving equality that enabled us to keep Soapbox alive and growing. But with ever increasing demands on our time and responsibilities as academics, it’s a struggle to maintain 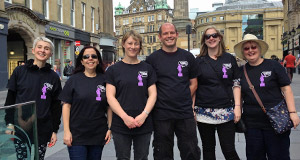 the high quality of our brand, whilst also accommodating the overwhelming demand worldwide for the expansion of Soapbox Science.

We won’t give up; we simply burn the midnight oil a little later to ensure Soapbox goes from strength to strength across the globe, working for equality, and bringing science to the masses. But if you happen to know a fairy godmother who’d like to help us out, we’d love to hear from you!