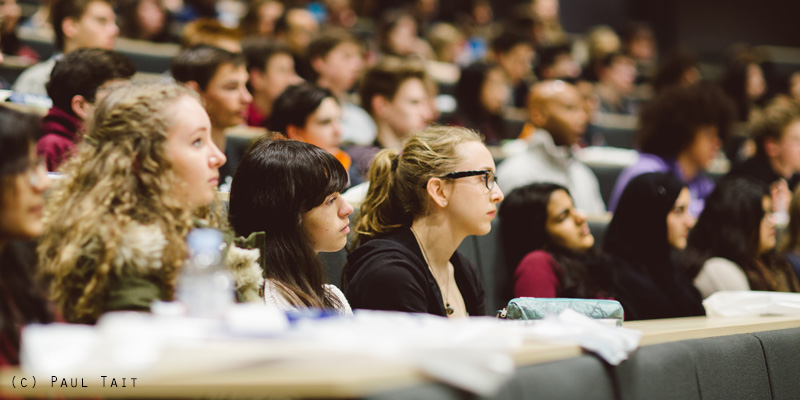 Dr. Rebecca Cotton-Barratt is a lecturer in mathematics at Christ Church, one of the largest colleges of the University of Oxford. She was an earth sciences undergraduate at Hertford College, Oxford before moving to the University of Warwick to complete a Ph.D. in mathematics. Rebecca is also the undergraduate admissions coordinator for the Mathematical Institute and she helps to run their extensive outreach programme.

“…there are a lot of similarities between maths and sport – people get put off both of them by having horrible experiences at school, or thinking that they just can’t do it, and then giving up…”

From dinosaurs to mathematics

At school mathematics definitely made sense to me as a subject (I think I even had a brief period where I wanted to be a maths professor), but then I became interested in dinosaurs and prioritised that more instead of maths. I took maths A-level (but not Further Maths – I was already doing five A-levels and there wasn’t enough room to fit in a sixth!), and then I studied earth sciences at the University of Oxford.

It was definitely during my degree that I became more switched on to maths – I enjoyed the geophysics options and linear algebra, as well as the statistical analysis around palaeontology, and then one of my tutors introduced me multi-dimensional morphospaces and I was hooked! Being friends with lots of mathematicians during my undergraduate probably helped nudge me in that direction too.

After my undergraduate degree I wanted to do something more theoretical, so I did a Ph.D. in mathematics and complexity science at the University of Warwick, looking at mathematical models of evolution (combining my two loves – maths and evolution!).

No need to be pigeon-holed

I don’t have a typical day – my work is very seasonal, so one day I might be talking to 300 sixth formers, the next processing 4000 admissions test scripts. I run and help to organise lots of events for school students throughout the year, both maths-specific and multi-subject focused.

One of the big messages I try to get across is that although it’s important to study the right subject for you at degree level, you shouldn’t let that constrain you later on in your career – there’s so much movement between different disciplines within STEM, but we grow up with this quite artificial grouping of “this is maths” and “this is biology / physics / science”.

When I’m not doing outreach, I’m coordinating the undergraduate admissions process for mathematics at Oxford, which involves lots of operational thinking to help tutors make the best admissions decisions.

Fighting against the societal perception of mathematics

The 4000 admissions test scripts are amongst my greatest challenges. We mark them all in four days, so there’s a very fast turn around and the process has to be watertight. That’s an operational challenge, but I think the biggest outreach and admissions challenge is fighting against the societal perception of mathematics.

So, if you’re trying to tackle under-representation of groups at degree level, it’s not enough to work with sixth formers – you have to start increasing the pool of potential applicants by working with younger students and informing them about A-level choices.

Similarities between experiences of maths and sport at school

There’s been a lot of really good research done about growth mind set and mathematics, and I think that message is starting to get through to both teachers and students. I think there are a lot of similarities between maths and sport – people get put off both of them by having horrible experiences at school, or thinking that they just can’t do it, and then giving up.

It used to be the case that only high-profile sports people were visible – so if you couldn’t be a gold medallist, what was the point? I think maths is still viewed like that – people think you have to be you have to be on track to win a Fields Medal in order to continue studying it (and one of the proxies we have for measuring that is how easy you find maths – which feeds this genius myth).

With sport however, there’s starting to be this great community (like Couch to 5k and the This Girl Can campaign) which have started to make exercise more accessible. I’d really like to see something similar happen for mathematics in my lifetime. I have a dream of people doing maths for pleasure, much like people read or exercise for pleasure.

I genuinely believe that mathematics is the best subject to study if you’re not sure what you want to do. Mathematicians go into such a range of careers after graduating – some directly use their maths (like in finance or accountancy) but others go into careers that don’t require a maths background at all (but might draw on the problem-solving skills that a maths degree teaches you).

There’s so much data-driven analysis now going on in different sectors that quantitative skills are useful in any sector.

My advice for career changers and mature students is that one of the things you bring to the table is outside perspective and experience so use those to your advantage. Think about where maths could have been used in your previous area and make connections between different ideas. Don’t worry when things aren’t obvious – think about them until they make sense internally to you. 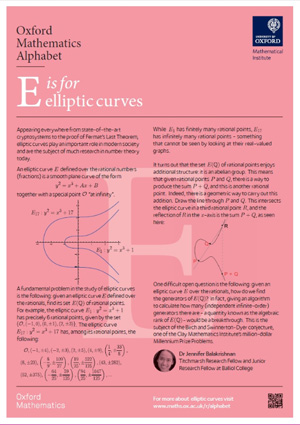 The Oxford Maths Festival is coming up on the 28th and 29th April. Here’s the details.

You can find out about the outreach going on in the Mathematical Institute at Oxford on our website.

And if you want to know a bit more about what mathematicians think about when they’re doing research, I’d recommend the Oxford Mathematics Alphabet.

In the next month we have our two open days coming up for prospective applicants, as well as a two-day event for Year 9 girls organised with the Further Maths Support Programme. More broadly, working in this area I’ve been fascinated with how people engage with mathematics and science and technology. These subjects are increasingly dominating peoples’ lives and looking into that more deeply seems really exciting.