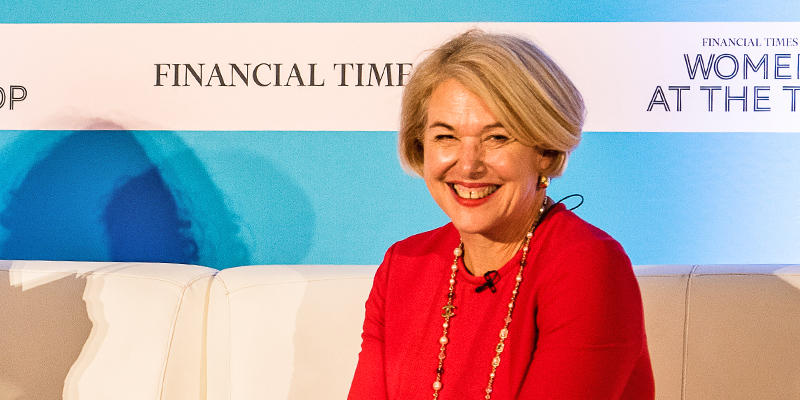 “In fact, the UN and others estimate that gender equality may have taken as much as a 15-year hit in terms of progress! At last count, the World Economic Forum said it was 207 years until we’ll have gender equality, so if we add another 15 years to that, you can see the ridiculousness of this problem.”

I’m originally American so I still have an American passport as well as a British one. I grew up in New Jersey and went to university in California and New York City. I did my undergraduate degree at Stanford University and my graduate at Columbia University.

I then came to Europe to work for Procter & Gamble for 14 years and moved from there to be the European vice president at Mars. I was then in director and chief executive roles at a couple of FTSE 100s here in the UK, before I pivoted, having been the only the first and only woman in the C-suite, which I found a pretty lonely place.

That is why I pivoted my career towards social enterprise, as many women do. Therefore, for the last eight years, I’ve been chief executive of the Chartered Management Institute (CMI), where our mission is to take ‘accidental managers’ and turn them into conscious leaders.

Better managers really make a difference in people’s lives. So, when we have great bosses that nurture us, challenge us, and support us, we do great work. When we don’t, the opposite happens. We develop all sorts of mental health problems, like anxiety and stress, that our performance suffers, so it’s really important how we lead and manage ourselves and others in our workplaces.

One of the things I love about my role at the CMI is it’s so varied. For example, today, I have been in communication with the Department for International Trade about taking part in a virtual UK trade showcase to Pakistan. We are getting involved internationally, I have been in dialogue with my team, working on our inputs into helping to grow schemes for small businesses, where I’m on the Advisory Council. We’re shaping our response with resources to help these small businesses to grow.

Later on today, I’ve got a team meeting that takes place every week where we review any impacts or pivots or changes we need to make because of COVID-19. Tonight, I’ve got a virtual event for Women in Defence where I’m a competition judge, and we’re announcing the winners!

So, as you can see, there’s a huge amount of variety to what I do every day, across a very broad spectrum of stakeholders. That keeps my work incredibly interesting.

A particular passion of mine is gender equality, I’ve even written a book called Create a Gender- balanced Workplace for the publisher, Penguin Business. 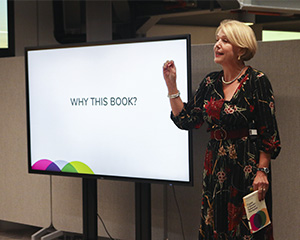 My interest in this is for two reasons:

Here in the UK, pre-pandemic we were making some progress in terms of gender pay gap, albeit at a glacial pace. The UK pioneered a wonderful pay gap recording system that was very transparent because the results needed to be published. However, with the pandemic, we know that generally, equality has taken quite a knock.

There are a number of reasons for this, not just in the UK, but globally: 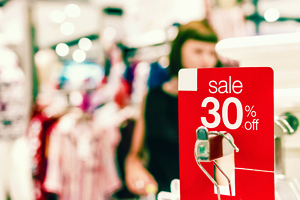 Therefore, as we build back better, we really do need to build back more inclusive, because a lot of the industries that are being champions, such as fintech, green energy, and data, are industries where women and ethnic minorities are not present very much or at all at the moment.

We need to make very conscious efforts to be inclusive and get women into those industries as we recover from this pandemic, especially if they’ve lost their job in one of the harder hit sectors, such as hospitality or retail. There’s a lot to do.

In fact, the United Nations and others estimate that gender equality may have taken as much as a 15-year hit in terms of progress! At last count, the World Economic Forum said it was 207 years until we’ll have gender equality, so if we add another 15 years to that, you can see the ridiculousness of this problem.

Due to my prior experience with Procter & Gamble and Mars in senior leadership roles, I have been a member of Women in Advertising and Communication Leadership (WACL) for longer than I care to admit, I’m really coming up to about two decades.

WACL recently made the purpose of the club all about accelerating gender equality, which really spoke to me and, obviously, with all the work we do at CMI and the book I’ve written. I was also part of the Government’s Advisory Council for setting up the gender pay gap reporting. Therefore, when WACL pivoted their purpose, I said I was very delighted to become much more active in helping them to realise it.

So, Jackie Stevenson, President of WACL, asked me if I would lead a working group on what we could do to educate our fellow members and others outside the WACL community on why closing the gender pay gap is so important, what the business benefits are of doing so, and why transparency and reporting matters so much.

It was part of the programme to really educate all the women of WACL. These are senior women across very well-known brands and companies, such as Google, Facebook, Virgin, Vodafone, as well as some of the best-known advertising and communications agencies.

Obviously, they touch a lot of people, which makes it quite important to make them advocate for gender pay reporting. However, when we learned in March last year that the enforcement of gender pay gap reporting had been suspended, we felt we should do something about it. Therefore, Jackie and in her WACL campaigning mode suggested that we would start a petition, which I was very happy to support, and that we would also join forces with The Fawcett Society.

Extensions we want to see in gender pay gap reporting

Even if not solely as a result of our efforts, I like to think that we did contribute in encouraging the Equality and Human Rights Commission to be more forthright when they announced the reinstatement of the enforcement of gender pay gap reporting. This was announced last month with a six-month grace period, so enforcement action against firms who fail to report will start again on 5th October 2021.

We wanted to see the reporting requirement extended in order to include three additional things:

My work with WACL is still ongoing. We’ve had a number of coaching sessions on this topic. We’ll also be putting together a toolkit by the end of April to help everybody, no matter where they work, to inform themselves about this issue. There will be practical things and suggestions on what you can do to become a proactive ally in helping your own organisation deal with it. You have to be practical, otherwise, people don’t get it.

Growing our way out of the pandemic

There’s a lot that we’re doing at the moment at the CMI, as I’ve mentioned. I’m on the advisory council of the Chancellor’s Help to Grow campaign for small businesses, which is an outstanding programme that we really want to see work.

We also want to be actively contributing our CMI resources to help small businesses grow because most businesses in this country are small businesses, and enabling them to do things like pivot, embrace equality and diversity, as well as putting employee wellbeing more centrally as part of their strategy, and to develop effective communication will be key to growing our way out of the pandemic and making the UK a really productive and inclusive society.

Additionally, in April, we are launching in collaboration with the Management Consultancies Association (MCA) a Chartered Management Consultant Award (ChMC). We already have over 1500 chartered management consultants and we’ve been piloting it with over 23 firms, so it’s been a big hit. We’re delighted to be broadening that out with the support of lots of major consulting clients, including the government and some financial services and industries. It’s obviously available to everybody, whether you’re in a big consulting global consulting firm, or whether you’re an individual consultant.

Finally, we’ve learned during this pandemic how important it is to have a digital-first strategy. Therefore, we’ll be building on that, and complementing and augmenting our resources for our members and for our other stakeholders, with lots more exciting digital resources, like online communities, diagnostic tools, and CPD. But of course, like many people, we are also eager to get back to a situation where we can also meet up in person as well as carry on digitally.

Ann is also the author of The Financial Times Guide to Management. 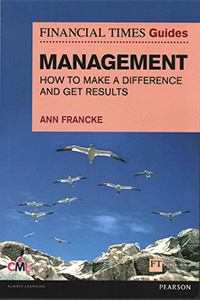