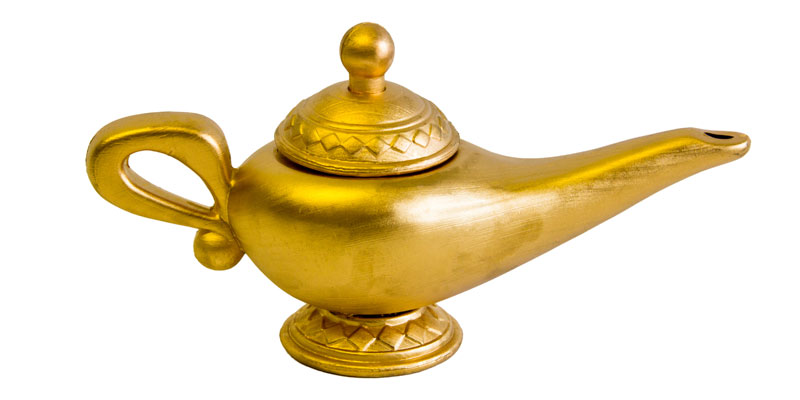 If you stumbled across a genie with a lamp, what would your three wishes be? Here are three of mine that didn’t turn out quite as I’d expected…

Is getting what you want always good for you?

We’re professional women and we’re constantly told that we need to go and out get what we want. We’re meant to set our hearts and minds on something and then zero in on it and pursue it relentlessly until it’s ours.

But have you ever broken down every barrier, left no stone unturned and pursued something totally and resolutely, only to find that actually, when destiny was keeping it just out of reach, perhaps it was no bad thing? Let me explain:

Example 1 – Wonder Woman costume when I was four

I was a huge fan of Lynda Carter from the Wonder Woman TV repeats of the early 80s. Lynda Carter had a number of uncanny superpowers, such as being able to deflect bullets with her gold wristbands (with her wristbands!) and she could lasso and tie up baddies with what appeared to be little more than gold gift wrapping cord. I wanted to be her, but alas, Santa never delivered this for me that Christmas and I got a polite note explaining that they’d run out of costumes in my size. Cheers Santa. Whilst I was initially distraught, I eventually moved on, distracting myself with a Nintendo Game and Watch and then a Sony Walkman in future years. But there was always a piece of me that still hankered after my superhero destiny….

Fast forward to a few years ago. I decided it was time for me to bag myself an outfit for a New Year’s Eve fancy dress party. There was only one costume I wanted. It was my destiny to become Wonder Woman at last. I was convinced my time had come. Now my own outfit was Argos’ interpretation of the outfit, so there were no tiny hot pants (thank goodness), but there was a big black wig, a gold headband, a red top with a big gold ‘W’ on the front, a red cape and a kind of blue spangly skirt with stars on.

Whilst it was great to finally make it into the outfit, I found that superhero gear is not the most practical for daywear or eveningwear and to be honest, not my best look ever. Some things are meant to pass you by and you shouldn’t always fight fate when it comes to red spandex. I’ve subsequently developed my own unique super powers. And they don’t rely on gold gift wrapping cord. Thanks, but no thanks, Wonder Woman.

My first ‘proper’ graduate job after university was as a merchandiser for one of the large high street retailers. Most of my other friends had already joined large organisations on graduate schemes in various different functions, but I was feeling left out and I decided that to fit in I needed to get myself onto a graduate scheme in a large blue chip company.

So I managed to bag myself a role that really excited me. A new career in fashion, with international opportunities, an onsite staff shop and some serious staff discount. What wasn’t to like?

Well, as it happened, quite a lot. I moved away from home to a new city, but the graduate scheme I was on had a staggered start, so I didn’t join the organisation as part of a big cohort of other graduates, so I didn’t get that feeling of belonging that I was looking for.

Whilst the role was interesting, it was more analytical than I had expected and it didn’t really play to my personal strengths. I spent a few miserable months in the role before I realised it was time to cut my losses and leave. I ended up finding a marketing role in a much smaller organisation that suited me much better, so I moved on.

There’s no such thing as ‘failure’. Whilst my first foray into the world of work as a graduate wasn’t my finest hour ever, it taught me a valuable lesson. It’s OK to leave something behind if it isn’t making you happy. Acknowledging that and moving on wasn’t a sign of weakness (as I’d interpreted it at the time), but a sign of strength. I had tried something new that wasn’t for me, and it was time to try something else new.

Having passed my driving test four years earlier in my sister’s hand-me-down car, which I might add, I totally and utterly loved to pieces, I decided it was time for me to trade up. I’d seen a bit of a sporty number. I’d just got a new field based role that required a lot of travelling so I decided that I needed something more reliable and befitting of my new role of executive slash Queen of the World.

So it was time for me to splash out on a new sporty little number. Fate however, was trying to tell me otherwise. The particular model and specifically the colour I wanted (‘petrol blue’) wasn’t to be found anywhere. “Black or silver are the best colours,” one dealer told me. Er no, black and silver are the colours he was holding in stock. How naïve did he think I was?

As I was buying a car and not a t-shirt, I decided to hold out for what I really wanted, my sporty little number in ‘petrol blue’. Finally, I found a dealer who had the model I wanted in the right colour. Joy of joys! I was so excited, I didn’t sleep at all the night before it was delivered.

But eventually, I’d become used to sleepless nights with this car, because it was the car from hell. It was under a three year warranty, but this didn’t really help as they could never fix all the problems with it. All manner of switches were faulty, so they replaced them with new faulty switches (thanks) and so the list went on. For some inexplicable reason, it began to lose power as I was driving. It got worse and worse to the point where I sold it.

Maybe if something you think you want is eluding you, it is eluding you for a reason. Had I not tried so hard to get this specific car, I might have been driving around in a black or silver version of the same model for years, with no hassle. But had I not pulled out all the stops to hunt down the car I really wanted, I suppose I would always have been disappointed I’d settled for second best and that’s not in my nature.

You can’t always get what you want…

So these were three of my wishes that didn’t come true in the way I’d expected. These were all a few years ago now, so I’m definitely older, and hopefully a bit wiser too, if nothing else. I do still have the Wonder Woman costume and wig in my garage, just in case I’m ever needed to save the world. (Again…)