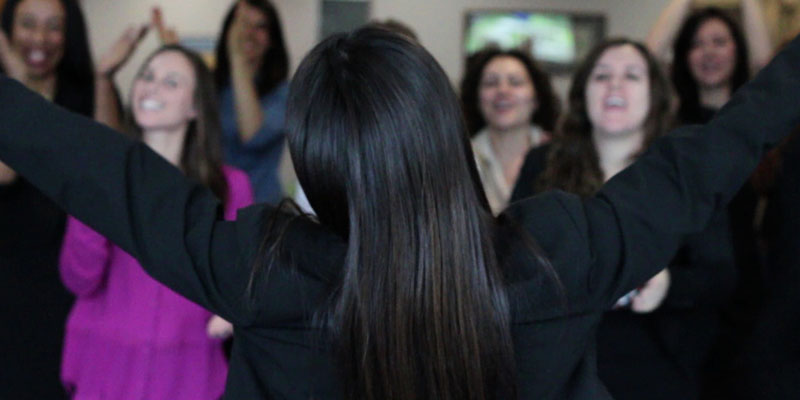 Nicole Donadio is an independent filmmaker and screenwriter living in Los Angeles, California. She has worked on such shows as FOX’s American Idol and ABC’s Castle. Donadio recently put a spin on Martin Scorsese’s Oscar nominated film, The Wolf of Wall Street, by creating The Women of Wall Street, a parody trailer where she replaced every male role for a female – same dialogue, same debauchery.

“…Women aren’t supposed to act this way, but in my world for a brief two and a half minutes, they can…”

Why create a gender flipping project?

When The Wolf of Wall Street was released, I was surprised to find that many critics as well as personal friends were blasting the movie. They found the constant partying, drug use, and explicit nudity too excessive and unnecessary.

When I did finally see the movie, I enjoyed it. As much as some scenes were hard to watch, this was the reality about the time the film was set, and is probably still the reality now. The question I continued going back to after watching this film was: Why can men continue to act this way? The answer is boys will be boys. It’s a simple phrase that makes inexcusable actions excusable.

I wanted to change it up, and let women be the irresponsible ones. Would people watch this movie? Would anyone ever make this movie? Probably not. Most of society feels women aren’t supposed to act this way, but in my world for a brief 2 and ½ minutes, they can.

A little bit about myself…

From a young age, I knew I wanted to tell stories. Stories allow me to take something that could never physically ever happen, and make it come to life — make the impossible, possible.

A film that demonstrated this for me was the 1985 film, Back to the Future. I would try and recreate scenes with my friends, and attempt to write a sequel when I was too young to know how to spell.

As much as I love directing, my ultimate dream is to write for television. As I pursue this goal, I have taken various jobs in the entertainment industry. I have learned a great deal from each of these positions, but they haven’t allowed me to express much creativity.

That is why I continue to write and direct films like The Women of Wall Street on the side. It allows me to continue to focus on my real passion.

How did I make it?

I received my Master of Fine Art Degree in Film Production in 2010 from Loyola Marymount University, but the last few years I have dedicated myself to screenwriting.

When I decided to shoot this trailer, I dusted off my camera and went back to the world of production. It was the last week of January and my goal was to have the trailer done prior to the upcoming Oscars in March.

With essentially no budget, I went hard to work on pre-production. I reached out to a casting director, who sent me a list of professional actresses. After casting the lead roles, I secured the locations.

Many people were enthusiastic about the concept and generously allowed me to use their businesses at no cost. Over the course of two weeks I single-handedly shot and edited the entire trailer, meeting my goal and releasing it exactly one week before the Oscars.

Funny, disturbing, or unbelievable? Refreshing to see females breaking out of the traditional mould

The reactions to the trailer have been very eye opening. When it was released, I had no idea what to expect. I did not want to state outright, “This is what I want you to think.” I wanted to have fun, and explore what people thought of this reversal.

Would they find it funny, disturbing, or unbelievable? Would there be a difference between what men and women thought? Overall, we had a little bit of everything. I received many emails from women around the world, commenting how refreshing it was to see females breaking out of the traditional mould.

On the other hand there were many comments saying quite the opposite, and questioning women’s capabilities. These comments admittedly surprised me, but controversy creates a lot of passion. We are still climbing and nearing 400,000 views on YouTube.

We have also been featured on many websites, most notably Slate.com, Huffington Post, InTouch Weekly, TIME, and Upworthy.

Now what? The importance of audience seeing stereotypes broken for women AND men

The process from beginning to end has been an immensely rewarding experience. My goal is to continue making more of these gender-flipping trailers. I think it’s important for an audience to see stereotypes broken for women AND men. Hopefully in the next month or two we will have wrapped production on our next trailer. For the time being please check out the trailer below.