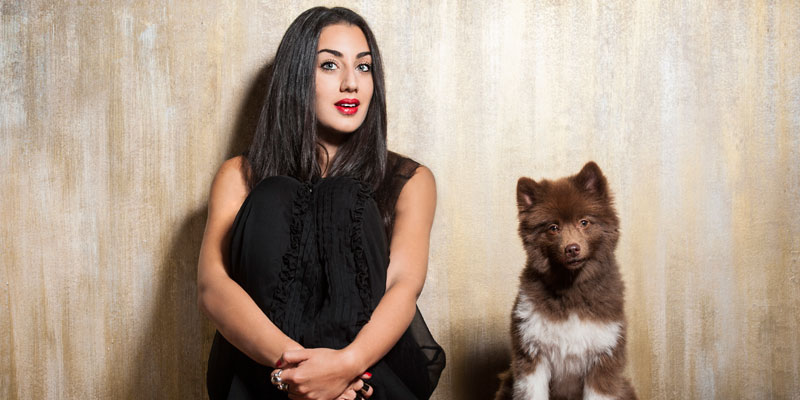 Gabriela Hersham is founder and CEO of Huckletree, a coworking space for startups and entrepreneurs in London, with services and support designed to nurture innovation and collaboration. The first site is at Clerkenwell, on the doorstep of East London’s Tech City and Silicon Roundabout, with plans for second and third spaces well underway. Gabriela is pictured above with her dog, Kenji, who is a regular visitor to the Huckletree office.

“…If you think back 30 years to the typical office of the 1980’s (think the classic 80’s films Working Girl and Wall Street!), the closed cubicles and harsh fluorescent lighting is such a stark contrast to how we work today. Today’s workplaces are being designed and built with people in mind…”

As coworking spaces in the UK continue to grow, what are the major benefits for tech startups working in these environments?

Only a few years ago it would have been unthinkable to share your workspace with a stranger. Now co-working spaces across the UK’s cities are attracting a surge of entrepreneurs, young Millennial ‘portfolio careerists’ and freelancers through their doors – who all sit side by side happily.

According to online directory CoWorkingLondon there are over 100 in the central London area alone, and a Deskmag study estimates that almost 300,000 people worked in nearly 6,000 coworking spaces worldwide by the end of 2014.

In 2013 I started Huckletree in Clerkenwell with the aim of providing London’s thriving young tech and creative community with an open, collaborative workspace where we encourage interaction and networking and strong broadband and technology benefits (something not always widely available in Silicon Roundabout!) We now have companies from European fashion search site Stylight rubbing shoulders with the likes of Workable in our offices.

With Huckletree at full capacity in our Clerkenwell space, and our plans for a second and third space well underway, it’s clear that particularly in the technology field, people are drawn to the powerful sense of community that they provide.

Today, we see tech giants like Google, Facebook and Dropbox leading the way as examples of companies with stimulating work spaces that encourage their employees to socialise and work alongside their colleagues in informal areas.

Entrepreneurs and tech startups who would normally not have the resources to recreate this kind of environment and office culture seek coworking spaces as a valuable alternative. Social interaction is at the heart these benefits, with Deskmag’s second annual Global Coworking Survey finding that 84% of people choose to work from coworking spaces for the benefit of interaction with others.

For a new start-up with one or two employees, social interaction and encouragement is all-important. I know one lone working tech start-up who described his previous home working conditions as like being in ‘solitary confinement’ – this was clearly no good for his motivation and sense of positivity!

Shared workspaces can deliver an environment that not only lets you surround yourself with people while you work, but provide a strong community where collaboration and idea sharing help propel your company forward.

A beautiful aspect of coworking communities is that collaborations can come from the most unexpected places. I recently came across a tech public relations agency working in a shared office with an IT recruitment company, who after originally connecting over shared cups of tea in the kitchen, realised a few of the recruiter’s clients were tech start-ups looking for PR support – and a collaboration was established.

Inspiration and exciting people about their daily routines

If you think back 30 years to the typical office of the 1980’s (think the classic 80’s films Working Girl and Wall Street!), the closed cubicles and harsh fluorescent lighting is such a stark contrast to how we work today. Today’s workplaces are being designed and built with people in mind: different zonalities, open plan, sunshine filtering, brightly coloured and transparent spaces that nurture innovation.

To me, Huckletree is an example of how a space can inspire its users. We want to excite people about their daily work routines, from the open light spaces, the free fruit and coffees, and the fun and modern interior design. Even my dog, Kenji, regularly comes to the office with me!

A large number of coworking spaces host events and programmes to inspire their members in the evenings, beyond their day to day interactions. We arrange talks and office hours within anything from online marketing to mindfulness and we’re taking clues from larger companies like Google about how to keep users engaged and inspired.

The reason why startups and entrepreneurs are able to dive into coworking communities and take advantage of these benefits? Affordable flexible contracts.

Most shared working spaces have a membership tier, starting with a basic level of entrance to a communal office, and adding on access to facilities such as meeting rooms, dedicated desks, private offices and event space.

Affordable rates and flexible contracts make coworking spaces an easy and relatively hassle free choice for tech startups and entrepreneurs, giving them the ability to reap the benefits of being part of a coworking space community. The idea of working alongside a bunch of strangers now seems full of exciting possibilities..!