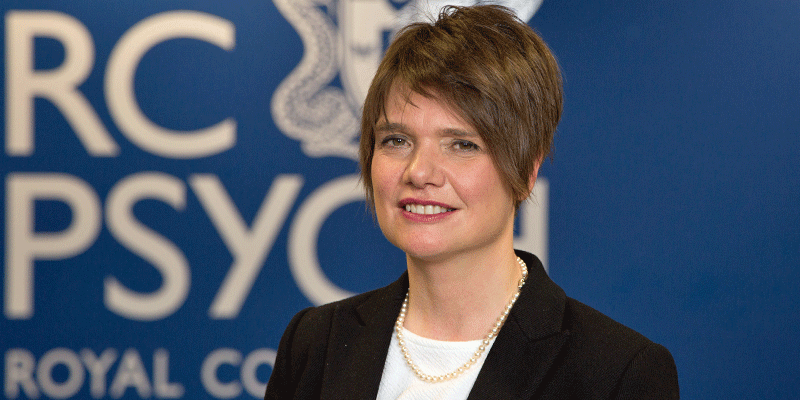 Dr. Kate Lovett is the Dean of the Royal College of Psychiatrists, having been elected for the period 2016 – 2021. She studied medicine at the Universities of St Andrews and Manchester, and was awarded a distinction in psychiatry at finals, before going on to train as a psychiatrist in the North West and obtaining her MRCPsych qualification in 1995. Kate has a longstanding interest in training and education, with a special focus in the development of systems supporting compassionate care and recovery, which is underpinned by values of equity and fairness.

“…There is no bigger joy than seeing someone who has been struggling to look after themselves and perhaps been at risk of dying recover and get back to enjoying day to day life, looking after their loved ones and getting back to work. No other job, no matter how well paid, has this kind of reward…”

Why I decided to become a psychiatrist

I think it is fascinating to reflect on why we end up doing the jobs we do. What are the influences that shape our choices? I certainly didn’t think about becoming a psychiatrist as a child. I doubt I would have known what one was.

Undoubtedly my parents’ interests and values shaped the environment I grew up in. I am the daughter of an education lecturer and a Samaritans volunteer – the fact I have become a psychiatrist with an educational interest maybe shouldn’t come as a big surprise given the dinner table conversations I experienced from a young age! Politics, law and journalism were on my list of careers but I was always torn as I really enjoyed chemistry at school. I was influenced to choose medicine by visiting a family friend in a mental asylum at the age of 15 along with lots of visits to a relative in hospital with heart disease. Medicine seemed a good choice in combining science and humanities.

I was also keen to be a financially independent woman. Growing up in the 1970s and 1980s I saw many women who had given up their own jobs to support their husbands’ careers and I saw the frustration and unhappiness that had often created. I developed a strong work ethic, getting my first job when I was 15, and was not put off tales of medicine as being “incredibly hard work” by less than encouraging careers teachers.

I gained a place to study medicine at the University of St Andrews, which had a guaranteed clinical training at the University of Manchester. I qualified in 1990 having gained a distinction in psychiatry. I was privileged to have been exposed to inspiring teachers as an undergraduate student. Although I wasn’t convinced I wanted to be a psychiatrist until after I had qualified, I thoroughly enjoyed my psychiatry attachment as a student. I trained in Manchester both full time and part time and took up my first consultant post in Devon in 2001.

Throughout my training I was interested in how people learn things and always keen to improve patient care. As a new consultant I got involved in supporting trainees and gradually took on educational roles alongside my clinical job as a general psychiatrist.

The role is voluntary and as you mentioned is an elected post. I still have a clinical post and lead a community mental health team in Devon. I am employed by a fabulously supportive organisation, Devon Partnership NHS Trust, who has wholeheartedly supported me to take on this additional role.

The role as Dean is hugely varied. I am a trustee of the Royal College of Psychiatrists, a registered charity, which exists to improve the lives of people with mental illness. Part of my role is overseeing, along with the other trustees, our activities and making sure they link to this aim. I am also responsible for the educational portfolio of the college – this includes outreach to schools, supporting undergraduate students, recruitment, training, postgraduate exams, continuing professional development, and developing and running courses and conferences to support our members deliver good quality care to patients.

In recent weeks I have been involved in our new members ceremonies, interviewing for posts at the college, been on the radio, been interviewed for the press, been examined in Hong Kong, given talks in different parts of the country and met with trainees, members and senior leaders in various organisations. The key thread in everything I have been doing is about raising standards in healthcare to improve the lives of patients.

In my clinical role the best part about my role is the patients. In my role as Dean, the trainees are the best part. I love working with psychiatrists who on the whole are interesting, intelligent, caring people with lots of broad interests. My colleagues have come from all round the world to train and work as psychiatrists in the UK. Being part of an international workforce is energising and a huge privilege.

Psychiatry is a medical specialty, so psychiatrists are doctors who have chosen to specialise in mental illness. It is an absolutely fascinating area because it is underpinned by cutting edge neuroscience along with psychology, sociology, law and ethics. This means that psychiatrists have to be good at a broad range of academic disciplines, and be able to be flexible in their thinking.

Psychiatry works in partnership with patients to consider the biological, psychological and social aspects of people’s illnesses and devise personalised treatment and care. It is also important to remember than many of our patients will be experiencing more than one medical condition and that some mental health symptoms can be as a result of underlying physical illnesses.

The psychiatrist is unique in the teams they work in in having medical knowledge and expertise. Psychiatrists need to be able to work closely together with other professions including nursing, social work, occupational therapy and psychology. They not only have to be academically able but also emotionally resilient, able to tolerate uncertainty and be strong leaders motivated to advocate for improved funding and services in mental health and to play their part to help combat the stigma that our society still applies to people with mental illness.

Psychiatry gets alongside people when they are often very unwell, experiencing distressing symptoms such as distorted thinking, severe low mood, suicidal thinking, agitation and hallucinations and helps make it safe for them to get better. There is no bigger joy than seeing someone who has been struggling to look after themselves and perhaps been at risk of dying recover and get back to enjoying day to day life, looking after their loved ones and getting back to work. No other job, no matter how well paid, has this kind of reward.

55% of medical students are now female. Although women remain under-represented in terms of number of consultants they now make up approximately 42%, and 50% of newly appointed consultants are now women.

Psychiatry thinks deeply about individuals and their situations with empathy, and diversity is a concept that comes easily to us. Psychiatrists are often people who feel strongly about fairness and equality and on the whole this is palpable in the working environment. Women are still significantly under-represented however in academic psychiatry, although women are now starting to catch up and there are an increasing number of role models.

The Athena SWAN Charter was developed in 2005 to advance the careers of women in technology, engineering, science, maths and medicine in higher education and research. There is evidence that it is has had an impact in improving gender diversity in academia. The programme was further expanded in 2015 to include the humanities, arts, social science, business and law.

The initiative has helped raise the profile of some of the issues and helped women develop strategies for dealing with what can be a hostile environment. Although I am not an academic psychiatrist I am delighted to see the culture shifting. When I was a trainee it was not uncommon to hear presentations referring to medical research teams as “The boys from X”. Although these sorts of comments were likely just to be unthinking it is so important that we all become aware of our unconscious biases so we can tackle them.

Putting talented people off a career in research because of their gender is the last thing humanity needs. Those individuals may have the potential to unravel the causes of dementia or develop life-transforming treatments for schizophrenia. The brightest and the best need to be drawn from 100% of the population.

My advice is: Do it! For everyone, regardless of their gender, my advice is the old medical adage “Look after your patients and your career will take care of itself”. I have found this to be true. The other piece of advice I would give to everyone is not to be anxious about taking on new roles and to see them as an opportunity to learn new skills. Be brave, step up and keep growing throughout your professional life.

The future: A growing acknowledgement of the importance of mental health and a growing acceptance around talking about it

It is hard to predict the future with any certainty but psychiatry is a specialty in demand – we currently don’t train enough psychiatrists in UK so as well as presenting challenges this also presents professional opportunity.

Mental health currently is receiving a lot of political attention and there is not a day goes by when mental health is not in the press. There is a growing acknowledgement of the importance of mental health and a growing acceptance around talking about it. However, there is a lot for us to do in terms of improving the physical health of people with mental illness, who die on average 15-20 years earlier than the rest of the population.

We are seeing increasing rates of anxiety and depression in young women and so we need to understand the reasons for this. We need to think about how we can influence the training of other professions in mental health too. We are likely to see growth areas in children’s mental health, mental health care within acute hospitals and mental health support around the perinatal period over the next few years. Advances in neuroscience are likely to help understand some mental illnesses better and lead to more effective treatments.

One thought on “Thinking differently about psychiatry: The importance of an inclusive approach – Dr. Kate Lovett, Dean of the Royal College of Psychiatrists”