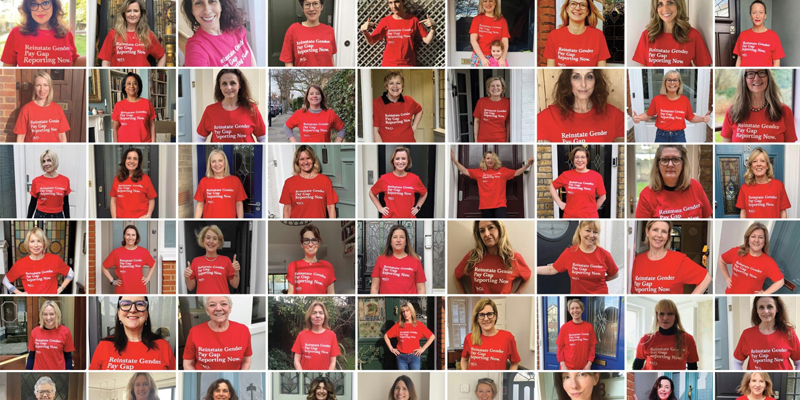 Jackie Stevenson is global CEO of The Brooklyn Brothers, a creative agency she founded in London. The company is now a global business with offices in London, New York and Brazil. Jackie became president of WACL, Women in Advertising and Communications Leadership, in 2020.

“The pandemic provided us with the world’s greatest flexible working experiment so we felt it was a chance not to be missed as companies and organisations everywhere were forced over night to work ‘flexibly’. However, the debate became binary very quickly, suddenly everyone was talking about working in an office or at home.”

From Worcester to the world

I had an interesting childhood as my dad was an entrepreneur and moved us around the country as his career progressed. He started out with absolutely nothing but by the time I went to university, he’d built and sold his company and so we were able to afford some of the things we couldn’t when he started out.

My education started in state infant and junior schools before I was lucky enough to gain a place at our local grammar school. When I reached the sixth form my family decided I would benefit from a private education so for two years I went to the King’s School in Worcester, so I really experienced the whole breadth of the UK education system!

I narrowly missed out on a place at Oxford, I did all the interviews and they offered me a place but asked me to defer a year. At that point, I was quite headstrong and decided if they didn’t want me that year, I’d head down south to Exeter University. I realised in hindsight that going to study English at Exeter was one of the best decisions I made. I definitely would have had to work hard to keep up at Oxford, at Exeter I really flourished.

Straight after university I travelled around the world for a year, and finally the penny dropped as to why I’d been asked to defer – travelling gave me such a brilliant grounding in life, I had some amazing experiences that I found invaluable as I looked for a place to start my career.

An entrepreneur at heart

Throughout my career I’ve faced a number of challenges that always required quite an entrepreneurial response so it’s no surprise that’s where I eventually ended up. I was totally focused on a career in advertising and marketing, however as I came back from travelling, the UK was in the teeth of a recession and companies had paused their graduate schemes, so I marketed myself as a personal assistant to get a foot in the door with a small direct marketing firm.

The grounding in the industry helped me eight months on to secure a position on the graduate scheme at Ogilvy & Mather Direct which was absolutely pivotal for my career, and things really took off from there.

I worked my way up through different agencies but by far my most significant move was joining a small start-up, Craik Jones. I was lucky enough to join the board and ultimately became managing director helping to grow the agency into one of the UK’s most creatively awarded direct and digital agencies. From there it was only natural for me to start my own agency which I did with my partner George Bryant and in 2008 The Brooklyn Brothers in London was born.

Connecting businesses with millions of women

I’m founding partner and CEO at The Brooklyn Brothers, we’re an earned first advertising agency, creating ideas for brands to help them punch above their weight in culture and achieve exponential growth. We have offices in London, New York, and a digital production unit in Brazil. Five years ago we were acquired by The Golin Group, so we joined the IPG family giving us the infrastructure and scale we needed to get us to the next level globally.

I’m responsible for our people, our client relationships and our growth into pioneering and interesting areas, and an ongoing curiosity and fascination for our industry and the role it plays in our economy really helps. The creative communities have a huge role to play in helping to re-start our economy post-COVID and we’re hungry to get all brands back to growth again.

I’m particularly excited by the growth in female-led businesses looking at female-focused products, especially in healthcare. This is going to be a booming area – as women we are so underserved in our health and wellbeing and there are many female entrepreneurs and forward-thinking companies who are making real in-roads into female health. As a company with a great track record building female-led brands, I’d like to think we’re brilliantly placed to help.

Women in Advertising and Communications Leadership

WACL (‘Women in Advertising and Communications Leadership’) has a long history having been founded in the 1920s so I’m really proud to be the 20/21 President. Our sole focus is to further gender equality in the workplace in our industry and beyond. 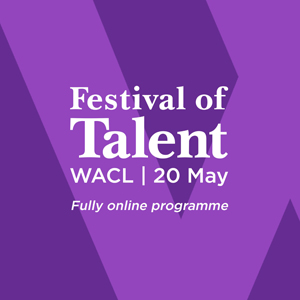 We count some of the most senior women in the communications, media and creative industries as our members and together we look to support each other, nurture female talent and drive workplace change. Along with our Talent Awards recognising future leaders in our business, our annual Talent Festival, this year taking place on Thursday 20th May (you can book here) where our stellar line up of female talent will be offering practical support, training and inspiration, we’ve also been busy campaigning.

Our recent work has included campaigns to make flexible working the norm across businesses, close the gender pay gap and to address the representation of women in the media.

Early last year WACL started campaigning for flexible working practices to be adopted as an industry standard. As we know flexible working is one of the most important tools we have in our fight for gender equality. The ability to work flexibly enables women to stay in organisations longer and both attain and keep senior positions measuring them on output and ability and not presenteeism and time spent in an office.

Focusing on flexible working and making our voices heard to Government

The pandemic provided us with the world’s greatest flexible working experiment so we felt it was a chance not to be missed as companies and organisations everywhere were forced overnight to work ‘flexibly’. However, the debate became binary very quickly, suddenly everyone was talking about working in an office or at home.

True flexible working isn’t just about geography, it’s about how long you work, when you work, how you work etc., so we flexed our campaign to talk about how many options were available to employers when looking at future working contracts and working life when the world begins to open up again and we were gaining real traction, the future of work debates were really opening out.

However, in February 2021, there was an announcement from the Government Equalities Office that really shocked us. They were not going to reinstate the enforcement of mandatory gender pay gap reporting for another year (which had been put on hold at the end of March 2020).

We were horrified by this! We felt we’d come so far with mandatory gender pay gap reporting, we were also campaigning for racial and disability reporting. To stop mandatory reporting felt like a huge step backwards and if it wasn’t put back on the agenda, it was just going to disappear off many companies’ priority lists. 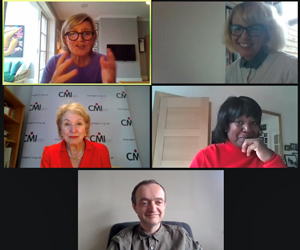 If it’s not measured it’s not treasured and we could see the huge drop-off from last year, when enforcement was removed for a year. It was vital for us to present the Government with a show of strength, so we partnered with Ann Francke at CMI (who is also a brilliant WACL member leading our Gender Equality group) and The Fawcett Society, and quickly launched a campaign to re-instate gender pay gap reporting.

We launched a petition directing people to sign through social media and outdoor poster sites. We distributed free t-shirts and Zoom backgrounds to supporters of the cause to help them make their voices heard. Within 24 hours LinkedIn turned red as senior women joined the campaign and showed their support.

Within a week and a half Liz Truss and the Equalities Office announced that enforcement of mandatory reporting would be reinstated, we’d made an impact! Two weeks later Liz Truss openly endorsed flexible working as a tool more companies can use to further equality and increase diversity, we were on the same page!

Welcome to the clubhouse approach to blended working

From a political and economic perspective, the Government needs people back in the offices, especially in cities for transport, shops and restaurants, but what we need to keep saying this isn’t binary. It isn’t just whether you’re in an office or not. It’s a blend. It’s about the way we want to work that will get the best out of everyone so employers can build the happiest and most productive workforce.

We’re not saying, “don’t go back into the office”. We’re saying, “employers, please help give your employees the opportunity to work in a way that’s best for them”. It’s not a case of getting rid of their offices; it’s just using them in different ways. For instance, in LA our Golin team got rid of their big downtown office. The money is now used to rent spaces in four or five different smaller offices around the city. They’re using a clubhouse approach to support fully flexible working.

Understanding the difference between the gender pay gap and equal pay 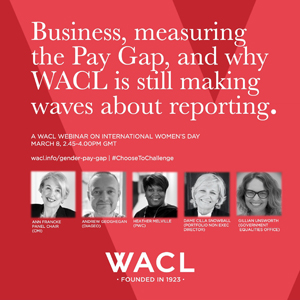 The gender pay gap is different, it’s a tool that allows us to look at the number of women at each level of the organisation, measuring average pay (and bonus pay) at each level of a company. So, if a company has lots of women at the bottom of an organisation, and lots of men at the top, then the gender pay gap is going to be greater than a company that has a more diverse distribution.

By tracking their pay gap companies can focus on the areas that are going to make the greatest difference – nine times out of ten this means keeping more women in the organisation and ensuring they reach the top levels of their companies. This is where flexible working comes in!

For WACL, I’m really excited about the next phase of our flexible working campaign, where we’ll be focusing on the benefits of flexible working for all – we want men to campaign for flexible working too, removing the stigma that flexible working is just for ‘part-timers’ or people who are not serious about their careers. We know it increases happiness at the workplace and will help all companies increase diversity, so, let’s get as many men as possible involved in working flexibly!

For The Brooklyn Brothers I am so excited about the female talent we’re bringing into the agency and growing. I’m really looking forward to partnering with the female-led businesses and changing the way that we communicate with women to get products and services that are going to change their lives into their hands. Very exciting times ahead!

By University of Exeter from United Kingdom – Piazza, CC BY 2.0 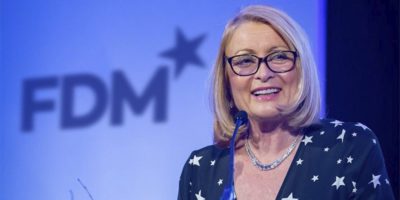 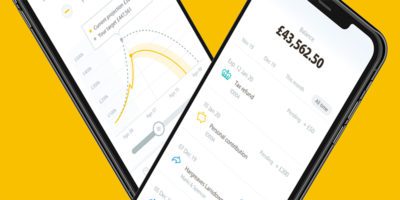