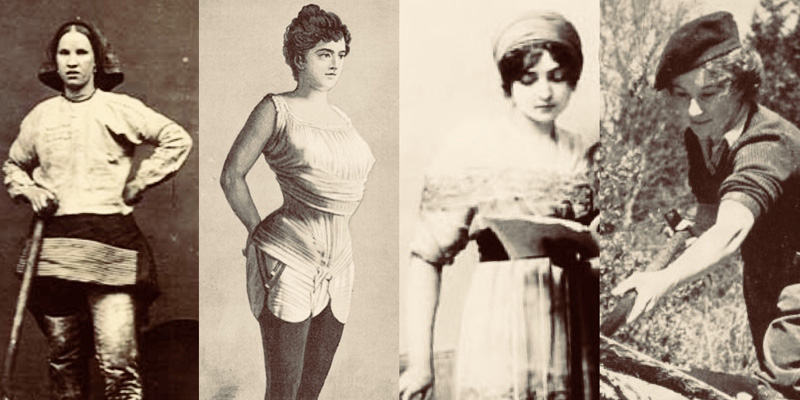 Annie Bowman is a painter and decorator who became frustrated at the lack of suitable workwear clothing for women. She began researching and received an overwhelming response from women who asked her to come up with something better. As a result, she began developing a range and ran a successful crowdfunding campaign on Kickstarter and was named Aspiring Entrepreneur of the Year at the Sheffield City Region Launchpad Awards, held in February 2018. 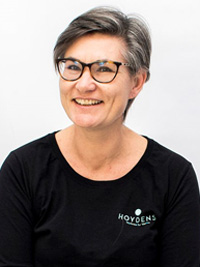 “…During the Victorian era, women who saw the way corsets could damage internal organs and deform the skeleton, started campaigning against the corset and for more comfortable, practical clothing as well as education for women and suffrage…”

From primary education to painting and decorating

I spent most of my childhood in Sheffield before going to university in Liverpool to study to become a primary school teacher. After the first year, I realised that I loved children, but teaching was not for me. I moved into office work, mainly purchasing, but after my third redundancy, I signed up for an all-women painting and decorating City and Guilds course at a local college in Oxford, where my husband’s job had taken the family.

I originally just wanted to do a better job on my own home, but I soon realised that this was the perfect job for a mum of two young children as I became my own boss so I was able to choose my own hours. After I had been working in Oxfordshire for about six years we moved to Germany, so I set up my business again there, painting furniture, decorating and doing odd jobs, mainly for other expats. I moved back to the UK and Sheffield after almost 30 years away at the end of 2016.

It was as this point that I started developing the concept for Hoydens, women’s workwear trousers that are comfortable and actually fit properly. 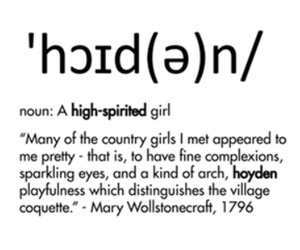 I chose the name ‘Hoydens’ because it avoided all the girly clichés of the ‘shrink it and pink it’ mentality around much of the existing workwear for women. I wanted something that would proudly stand alongside male brands. The word ‘hoyden’ was first used by Mary Wollstonecraft in 1796 to mean a high-spirited girl. This summed up what I wanted for the brand.

At the end of November 2017, I launched a Kickstarter campaign to allow me to produce a first range and, to my surprise and delight, I hit my target just before Christmas.

A brief history of women who first dared to wear trousers

For this Women of History issue of Womanthology, I was asked to provide a brief history of women who wear trousers, so here goes…

Today, we all take for granted the fact that we can wear trousers whenever and wherever we like. Surely the horse riders and manual workers of ancient times wore some form of bifurcated legwear, but to be honest, until modern toilets arrived, maybe it is just easier to wear a skirt to squat.

I would like to celebrate the Lancashire Pit Brow Lasses, the first in the Victorian era to dare to wear trousers. Pit Brow Lasses were the women who worked above ground at the pit entrance, sorting the coal and loading the wagons.

After the 1842 Coal Mines Act, women, girls and boys under ten-years-old were no longer allowed to work underground, partly because of the Huskar Pit disaster when a flash flood caused the deaths of 26 children, but also partly because the commission were scandalised by women and men working bare-chested, side by side in the heat of the mine.

The Pit Brow women certainly had little choice about whether they worked or not, and maybe little choice about where they could be employed. Rather the fresh air of the top of the mine than the factory. Most of them would have been married to miners and were paid half as much as the men. If they couldn’t work down the pit, already near the bread line, how could these women feed their families?

Many women worked above ground in the mines around the country, but it was just in Wigan that they had the nous (and courage) to go against the grain and alter their clothing to suit their work.

Wearing their husbands’ old trousers under their long skirts, they would hitch up their skirts to knee height and carry on with their work in greater comfort. They had faces dirty with coal dust, and scarves over their hair, but they still enjoyed showing off their femininity by wearing ribbons around their necks.

They may have been some of the first women to go against the uncomfortable, impractical sartorial norms of the day that kept women supposedly respectable, but definitely in their place. These scandalous women could earn a little extra by posing for photographs, which were then sold as post cards and visiting cards to curious tourists and commercial travellers.

Audacity in a time of prudity

I applaud the Pit Brow Lasses for their audacity at a time of such prudity. The upper classes were concerned that if women dressed like men, then they would act like men and be feeble minded drunks. They feared that by wearing trousers, women were disgraceful and immoral.

During the Victorian era, women who saw the way corsets could damage internal organs and deform the skeleton, started campaigning against the corset and for more comfortable, practical clothing as well as education for women and suffrage. Being free to move and wear clothing suited to the task in hand is also a part of women’s equality.

The beginning of the independent modern woman

Oscar and Constance Wilde were involved in promoting the Rational Dress Movement and the divided skirt – a compromise between a dress and trousers. Women’s trousers, shocking for some, came into the spotlight in 1913, when a French designer, Paul Poiret, based some wide leg, loose fitting, harem trousers on the craze for everything Middle Eastern and 1001 Arabian Nights.

Katherine Hepburn was among the first celebrities to refuse to conform to the social norms and laws(!) of feminine appeal by wearing trousers. In the 1930s women’s trousers were synonymous with being forthright and frank, proud, clever and non-negotiable. In short, the beginning of the independent modern woman.

Empowerment through workwear that really fits 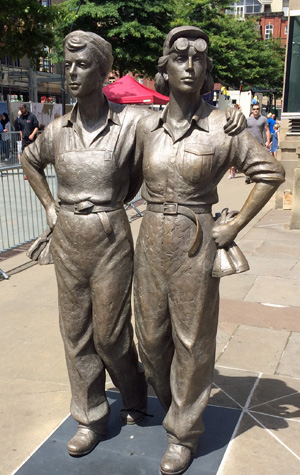 Of course, working women over the following decades were to start wearing their husbands’ civilian trousers to work in the factories during the wars. Think of the Rosie the Riveters, Sheffield’s Women of Steel, the Land Girls and Lumber Jills. Once these wore out, the sales of trousers fitted to a woman’s waist and hips rocketed.

Nowadays we wear the trousers physically as well as metaphorically. Instead of having to adapt our workwear to the job like the Pit Brow Lasses, let’s have workwear available to suit different women’s body shapes. This might just encourage us to feel able to look smart, feel comfortable and do any job we choose. Wouldn’t that be fantastic?