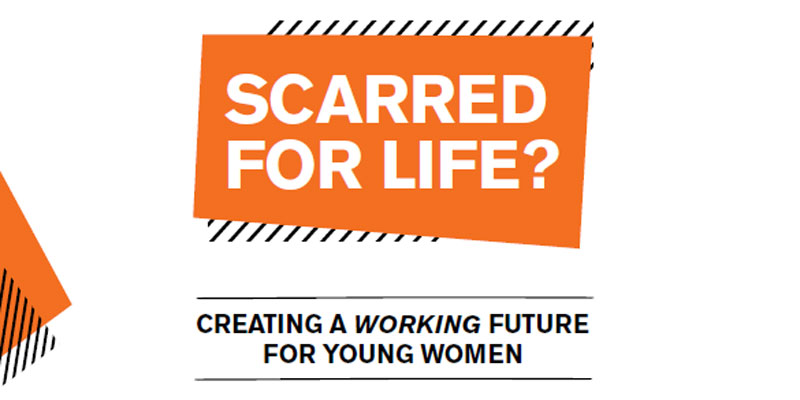 Rebecca Gill is Director of Policy, Campaigns & Communications at Young Women’s Trust. Young Women’s Trust supports and represents over one million women aged 16-30 trapped by low or no pay and facing a life of poverty, providing services and running campaigns to make sure that the potential and talents of young women don’t go to waste.

Over the last year Young Women’s trust has been running an inquiry focusing on young women who are not in education, employment or training (NEET). The latest figures from the Office for National Statistics show that, amongst 18-24 year old women, 428,000 young women are NEET – almost one in five. Analysis of official figures shows time spent being NEET is having a particularly devastating impact on young women’s lives now and in the future. The results of the Scarred for Life? Inquiry were launched at the Houses of Parliament on Wednesday 25th March 2015.

Background to the Scarred for Life? Inquiry

Young Women’s Trust conducted some desk research in 2013 into the lives of young women in England today. We were struck by the fact that over 100,000 more young women aged 18-24 than young men were not in education, employment or training (NEET), and yet this did not appear to be the subject of much scrutiny by the media nor focus by politicians, policy makers or service providers.

We set ourselves a year to complete the Inquiry and had a very small team based in Young Women’s Trust who did all the work and recruited an expert Panel who could provide guidance and expertise throughout the Inquiry.

We were extremely fortunate that the broadcaster and journalist Sian Williams agreed to Chair the Panel. We wanted expertise from a cross section of agencies and organisations because of the nature of the issue we were exploring. We also wanted at least two young women with experience of being NEET to be on the panel. Our two trainees have fulfilled this role.

We wanted to hear from young women around England with experience of being NEET. We contacted dozens of organisations, agencies and charities that work with young people and asked them to organise focus groups of young women for us to interview. Through this we were able to meet with over 60 women across England.

We also commissioned the polling company, ComRes, to undertake a poll of over 800 young people (male and female) who were NEET.

The Scarred for Life? Inquiry set out three key findings:

The average time young women spend being NEET is three years compared to two years for men. Young women are more than twice as likely as young men to be at risk of unemployment, low pay and insecure employment aged 18-24.

Young women’s employment and training choices are far narrower than young men’s: for example 61% of female apprentices work in just five sectors; the same proportion of men work in more than ten.

The choices young women make at a very young age can have a devastating impact on their future. Young women are being trained in jobs that don’t exist and then denied any opportunity to train in sectors where there is paid work. For example, in 2013:

In terms of the long term consequences, among those who have only had a minimum wage jobs in the last ten years, almost four in five are women. The trap of low pay and no pay affects young women across their lives and will be felt by them and their families. These young women are at greatest risk of being poor pensioners.

Response from the major political parties to the report

We have been speaking with politicians from across the political spectrum throughout the year. Given the timing of the report’s launch (days before Parliament was dissolved and the general election called), we will be focussing our lobbying efforts on the new Government once it is in place. However, so far, none of the political parties has produced manifesto commitments specifically aimed at supporting young women back into work, education or training.

We believe it’s very important not to lump all young people who are NEET, together, and to recognise that young women will often have different barriers to moving from worklessness to paid employment than young men.

Young Women’s Trust is keen that young women with experience of being NEET are considered part of the solution to the problem, and that they are talked to, rather than about by the media, politicians and policy makers.

Having learned so much from Scarred for Life? over the next year we will be campaigning for the implementation of its recommendations, including launching a campaign to improve apprenticeships for young women. We are also continuing to roll-out our Work It Out online and telephone coaching service aimed at supporting young women to gain confidence and employability.

Finally, we will also be working hard to challenge the negative perceptions people have about young women who are trapped by the cycle of low pay and no pay. 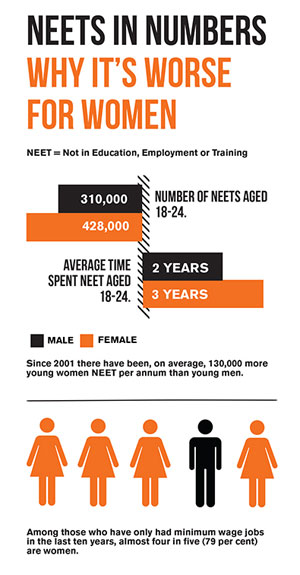