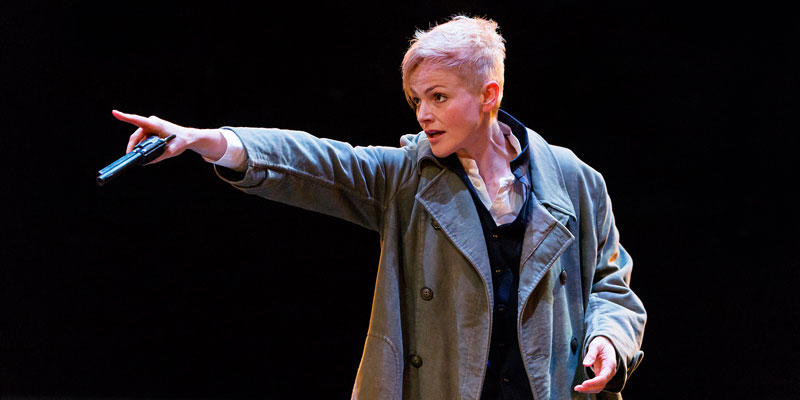 Theatre and television actress Maxine Peake is currently starring in a bold re-imagining of William Shakespeare’s ‘Hamlet’ at the Royal Exchange Theatre, Manchester, taking the title role in a new production. Maxine was born in Westhoughton, Bolton and she joined the Octagon Youth Theatre, Bolton, at 13, before a period at the youth theatre of the Royal Exchange. She was BAFTA nominated for her performances in both ‘The Village’ and ‘Hancock and Joan’. Maxine’s many other TV credits include ‘Silk’, ‘Red Riding’ and Myra Hindley in ‘See No Evil’.

Maxine Peake stars in ‘Hamlet’ by William Shakespeare at the Royal Exchange Theatre in Manchester, which runs until to Saturday 18 October 2014. Maxine is reunited with director Sarah Frankcom following the huge success of ‘The Masque of Anarchy’ for the Manchester International Festival 2013, and her performance as ‘Miss Julie’ at the Royal Exchange in 2012.

Maxine Peake on re-imagining Hamlet: A project that would stretch and excite us

Sarah and I have looked for a project that would stretch and excite us and Hamlet just seemed the next natural step to challenge us both in so many ways. I am so excited at how gender swapping can affect and throw up new ways of looking at this theatrical masterpiece.

It’s a bit of a dream come true; I’m doing a sword fight and then I’m punching someone in the head! I get it now why men get [so] excited about wanting to play Hamlet. You do everything: every emotional base is covered. It is…the ultimate part.

Traditionally, Hamlet only has two female roles; Ophelia, who is Hamlet’s troubled love interest, and Gertrude, who is his mother. Director Sarah Frankcom has changed this, however, with her radical re-imagining of the play that has placed Maxine Peake centre-stage in the title role.

In this production, 7 of the 14 actors in the Royal Exchange’s production are women. Characters such as Rosencrantz and Polonius have been made into female roles (Polonius’s name has been changed to Polonia to make this clearer), whilst other characters, such as the Player King, are being performed by women who are obviously cross-dressing and pretending to be men; further underlining that sex and gender are not clear-cut or straightforward in this play.