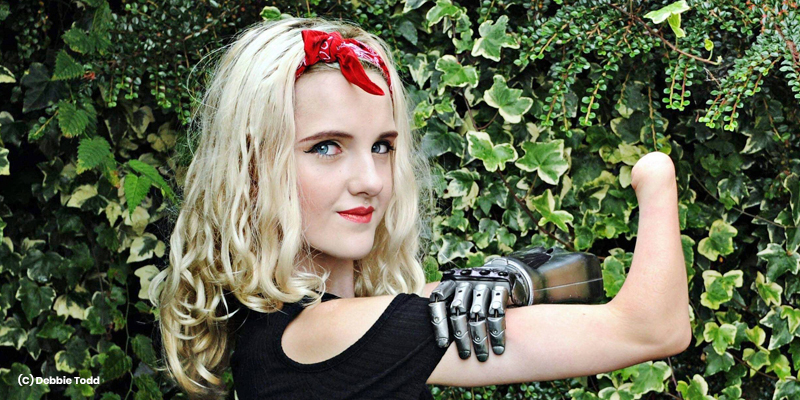 Sarah Lockey became a campaigner and fundraiser after her daughter, Tilly, caught meningococcal septicaemia, a deadly form of meningitis for which at the time there was no vaccination, and had to undergo an operation to have both her hands amputated. Sarah works to raise awareness about meningitis as the community fundraising officer for the North East at Meningitis Now. Tilly now has two robotics hands from Open Bionics, a UK-based start-up company that develops low-cost bionic hands, as well as helping to raise awareness of the challenges for child amputees.

“We hope to try and stop the stigma of wearing a prosthetic. It doesn’t just have to be an ugly medical device. It can be super stylish and fun too.”

My daughter Tilly was born a beautiful healthy baby girl but, on the 21st January 2007, when she was only 15 months old, she became very seriously ill.

At first, Tilly was diagnosed with only having an ear infection, however throughout the day she gradually got worse and started to show symptoms of meningitis septicaemia.

We got her to the hospital just in time but to still receive the news that they didn’t think that she would survive. At that moment they hadn’t seen a child as sick as she was with the illness and basically gave her 0% chance of survival.

Tilly was transferred to Newcastle General Hospital where the amazing staff in the Paediatric Intensive Care Unit saved her life. After a week in intensive care, three weeks in recovery, ten blood transfusions and a secondary infection Tilly survived.

She had to have her hands amputated but that was a small price to pay for getting her life back. I always said that anything else we could just figure out together as long as we had our Tilly back.

An article that saved Tilly’s life

As you can imagine being affected by meningitis really did change mine and my family’s life forever.

I feel like it is important to point out that one of the reasons that I suspected that it was meningitis was because I had read, not long before Tilly got ill, an article about a little girl who had lost both of her arms and legs to the disease. They showed images of the septicaemia rash which I was seeing for real on my own daughter not long after.

I am so appreciative that story got printed and that family wanted to share their story to raise awareness because that information might have just saved my daughter’s life. This is why to me it is so important to raise awareness and for Tilly to share her story with others. If it can even save one life, we are doing something right.

It’s my time to help others

We were supported by a man called Tony Neve from the charity Meningitis Help. I can’t begin to tell you what his help meant to us. I honestly don’t think we would be where we are today without his support in the beginning.

We are still in touch today and I know he is there quietly helping so many other people. He is an absolute angel that wants nothing in return.

I decided that one day I wanted to be able to support others through meningitis like he had helped me, and I remember just putting a job search into Google. I wrote the key words, fundraiser, meningitis, north east, and up popped a job matching that exact criteria.

The biggest meningitis charity in the UK, Meningitis Now, were looking for a community fundraiser to look after those families that had been affected by meningitis in the North of England who wanted to fundraise for the charity. It was one of those moments where you feel like you were meant to apply for that job.

Here I am three years down the line as Meningitis Now community fundraiser for the North East. I get the honour to help and guide our families though their fundraising, whether it is a coffee morning in a church hall or a big auction and dinner in a swanky hotel. Whatever our families need I can assist them.

I have been on the side-lines cheering our supporters through The Great North Run to just being an ear when they needed someone to talk to when moments and memories get tough.

Ultimately, I guess my role is being a friend when you need that support, and that is what I love about the whole team at Meningitis Now. Together we are a big family. Our supporters mean the world to us and we want to help them in any way we can.

Our aim is to support and to save lives and we deliver this through the research that our charity pays for to help prevent meningitis in the first place and the awareness materials that we distribute everywhere we can get it!

A difficult time for Meningitis Now

I am so proud that during lockdown, and the hardest time that the charity has faced, we were still able to support our families with our Rebuilding Futures Fund, which is there to help those affected by meningitis get the equipment that will help them succeed in life. It might be a wheelchair, sensory equipment or a laptop. We listen to their needs and try to help in any way we can.

COVID-19 has had a massive impact on the charity and the worry is meningitis is far from over and we have to continue the fight against it. Our fundraising has been significantly affected.

All of our normal events had to be cancelled so we face a huge drop in our income. This obviously has a knock-on effect and the only way I can really say it is, we don’t have enough money to continue all of our vital work.

We are facing our biggest challenge and we are asking if people will stand with us and continue to fundraise for us safely.

How Tilly got new arms

Tilly is one of Open Bionics ambassadors and trials any new updates that the company want to put into the arm. 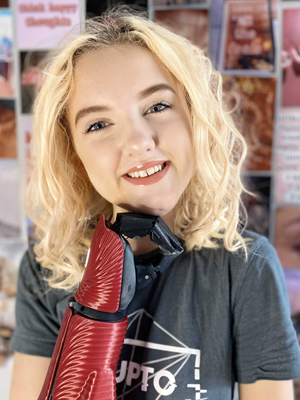 They have a really close relationship with all of their ambassadors and really listen to the updates the ambassadors would like to see them work on. It is what makes the company so successful. They listen, they care, and their products are used every day by the people who really need them. Tilly is very vocal when it comes to what works and what doesn’t and what could make them better.

The Hero Arm was launched in 2018 and Tilly received her first pair of prosthetic arms. We went onto the tv show This Time Next Year with Davina McCall and Tilly’s pledge was, “This time next year I will have hands” and she walks onto stage wearing her shiny, light up blue bionics.

One had been given to Tilly as a thank you from Open Bionics for all of her help she had given them in getting product ready to launch and the other was bought for her by a man called Paul Nicholas who had seen her on the news and very kindly just wanted to buy her one. She is one very lucky little lady.

A year later as Tilly was still growing, she was due to get a new pair of hands and the most amazing opportunity came our way: Open Bionics had been collaborating with 20th Century Fox.

The World Premiere of Alita: Battle Angel was to take place in London, and they wanted to make Tilly a pair of Alita bionic arms.

It was all a huge surprise for Tilly, but not only did she get some fabulous new bionics she also got to walk the blue carpet and attend the premiere alongside Rosa Salazar (who plays Alita), James Cameron, Jon Landau and the rest of the cast! What an experience and one that has changed her life, I think.

How Tilly’s life has changed

I remember receiving the phone call from casting directors for an O2 advert. I was in the hospital at the time.

Tilly had recently undergone a leg-lengthening procedure and had a huge external fixator on her leg. She had to undergo this operation due to side effects from the meningitis which had caused her growth plates in her thigh to stop growing. Therefore, she has one healthy leg that grows normally and then one that has stopped growing.

The phone call came as a surprise and we were delighted to hear that the casting directors had seen Tilly online and how articulate she was etc. and thought that she would be perfect for the advert.

Even though she had this massive fixator on her leg, Tilly was so professional and didn’t let it bother her. The O2 team were all amazing and looked after us really well and made sure Tilly was happy with everything. It was brilliant seeing her on the tv during the advert, even if it was for a split second.

She went on to do The Great British Bake-Off advert last year too. Now Tilly has over 50k followers on Instagram and has her own YouTube Channel she has started to be approached by more and more companies.

The future for Tilly

Tilly’s main focus is always in supporting with prosthetics and trying to get the best out there to help people, especially children.

There is now an Open Bionics Foundation, where people can donate to support those people that really need help funding their bionics. The dream is to get these hands to everyone that needs them as low cost or free as possible! So, if there is anyone out there in our big world that could help fund a bionic for a child please contact us!

Tilly has been travelling the world sharing her story and hoping to inspire others. She would love to continue this as it is so important to both of us that prosthetics can be viewed in a different way.

We hope to try and stop the stigma of wearing a prosthetic. It doesn’t just have to be an ugly medical device. It can be super stylish and fun too. To me, Tilly definitely showcases this through her modelling and Instagram. Her Instagram is an important platform for her. She has a lot of amazing supporters on there and she can keep in touch with those who look up to her for her confidence and strength.

In other news, Tilly has been given her first contract as a TV presenter and will be hitting the screens on Sky in September.

She is a new child presenter for the Children’s news show, FYI, which she has actually featured on twice over the years. Now she will be on the other side of the questions and asking them rather than answering them.

She is also going to be involved in other tv show which we can’t talk about just yet but that is the next thing booked in for me and Tilly to do together. We are a great team and whatever Tilly’s dream is I will be behind her every step of the way. I think her future holds big things and we are so excited to find out just what.