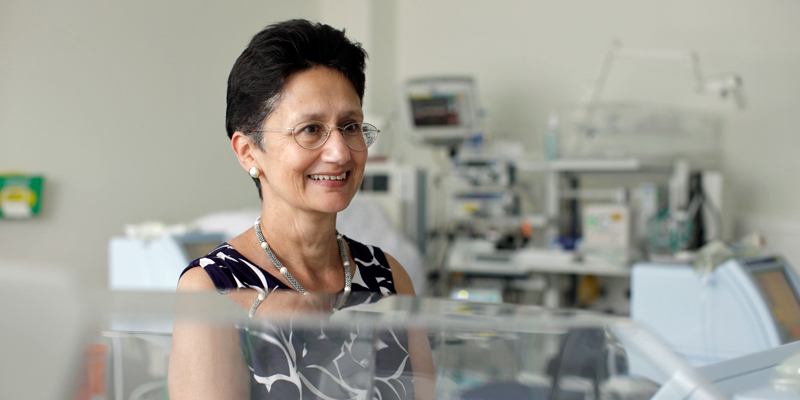 Professor Neena Modi is the president of the Medical Women’s Federation. She has a national and international profile as a medical leader, clinical scientist, advocate for child health and wellbeing, and campaigner for the retention of the National Health Service as a primarily publicly funded, publicly delivered healthcare system. She heads the Neonatal Medicine Research Group and the Neonatal Data Analysis Unit at Imperial.

“…there is still this perpetuation of the view that there are some issues that are women’s issues. Quite frankly I do not think there are any such things as women’s issues and men’s issues. There are simply societal issues which we should try and resolve together, collaboratively… ”

I come from a long line of doctors, but male doctors, and the honest truth is not one that I should be particularly proud of but I think it does have a message for women. The main reason I wanted to become a doctor was because I was told I couldn’t be a doctor. Yet my father, my uncle, my cousins, my grandfather, my great-grandfather were all doctors and I saw no reason why I shouldn’t be a doctor too, but when I broached this as a child I was told: “Well, no. Women don’t become doctors.” So, it was pure bolshiness on my part!

Having done it possibly for the wrong reasons, I’m absolutely delighted because it has been the best career ever and I can’t imagine having enjoyed doing anything else as much as I’ve enjoyed this.

A diverse and interesting career

My role since I decided to go into academic medicine has been as both a clinician and a researcher so for the last couple of decades, I’ve worn three hats. One has been as clinician, second is as a leader of a research group and the third is the various professional roles that I’ve held.

We all get told so often what is we should do, or what route we should go down, but I say just follow your heart’s desire, because that way you will never be disappointed.

COVID-19 has come on the back of what has been an absolutely appalling situation for the NHS, which has gone on for the last decade.

There is no one in this country who doesn’t know that the NHS has been progressively squeezed of funds.  There is no one who doesn’t know how fragmented services are. But there may be people who don’t understand the extent to which we’ve moved away from the founding principles of the NHS – in other words progressively towards provision by for-profit providers paid for with public funds.

When COVID struck it was really just the final nail in the coffin, because we had an NHS that was not resilient, was not prepared and was in a very enfeebled position. The Government’s strategy was to save and protect the NHS. Protect the NHS because the NHS absolutely needed protecting because it was in such weakened condition already.

Impact of COVID-19 on services

I don’t know exactly how services will change but I do know how they ought to change. Again, one of the things we’ve seen played out over the last six months is the impact of having to deal with an NHS that was not resilient.

Prior to COVID, in 2016/17 we’d had the huge, huge tragedy of the junior doctor contract difficulties with Government. Then in 2018/19 we had the Government pulling bursaries for nurses. Then we had Brexit, which lost the NHS an awful lot of staff and also made the very large number of staff who come from the European Union feel unwanted and unloved, which was terrible. 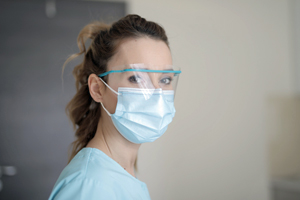 So, you’ve now got major funding shortfalls, the junior doctors alienated, the nurses alienated and all of the EU staff alienated. Then the Government decided to tamper with doctors’ pensions, which alienated a whole swathe of senior doctors and many, many GPs simply left and took early retirement. And then you had COVID.

That’s an enormous issue, and of course, there’s no one in the UK not aware of how tragically social care has suffered. It’s come to light because of COVID but social care has been suffering for decades and we’ve had successive Governments push into the long grass the various white papers and green papers about social care with very little change being achieved.

Then we had COVID and we’ve all seen the tragedy and huge loss of life within care homes and not only by the residents, but also by the staff. The scale of the tragedy is really enormous, and it’s heartbreaking.

I want to make people aware that the NHS which people cherish so much and that we all rely on so much is not being looked after in the way that it should be looked after. Raising public awareness is possibly the best hope of trying to turn this around.

Role at the Medical Women’s Federation

Anyway, it came to the crunch when a good friend of mine said: “Neena, I’m tired of hearing you say that. You are really being a bit of a coward and you really ought to put your money where your mouth is. You’ve got to join and say what you feel the Medical Women’s Federation should be doing.”

So, I did join and then having joined I thought well, if I’m going to try and change something I might as well try and get myself elected onto an officer position. So that’s what happened. (Again it harks back to the time when I was told I couldn’t become a doctor!) I was very honoured to be elected president and I took on the role earlier this year.

Importance of the Medical Women’s Federation

It’s important. One only has to look at the data. So, going from a position where women had to fight for the right to enter medical school over 100 years ago, now we have over 50% of the intake to medical schools being women.

Throughout the country, the ratio of intake of women to men is higher. But at the senior end of the medical spectrum, whether it’s managerial or in clinical research or in clinical practice, the ratio is a total inversion.

Now when people say, “Oh yes, but give it time and it will even out.” Well, that’s fine, but people have done the projections and have shown that actually at the current rate of change it is going to be another 100 years before women reach equality at the senior end of the profession. So that’s point number one.

Point number two, as you will know, is that there is still a very substantial gender pay gap in medicine. It ranges from roughly 11% to 28% depending upon which bit of the profession you look at, and how you actually do the analysis, but the bottom line is there is still a substantial pay gap.

And the third issue is that of course, and I think here women are their own worst enemy, there is still this perpetuation of the view that there are some issues that are women’s issues. Quite frankly I do not think there are any such things as women’s issues and men’s issues. There are simply societal issues which we should try and resolve together, collaboratively.

Women do themselves a disservice when they say for example: “Oh but women carry the burden of childcare and elderly care and less than full time working.” We shouldn’t be saying that. We should be simply saying: “Actually, hang on, we’re not going to carry this supporting of burden of anything. We want burdens to be equal throughout society.”

Advice for girls and women looking to get into medicine

Today there are no barriers for girls and women getting into medicine, certainly not in this country and not in most high-income countries. But, if you take that question globally then there is still a big issue. They are fighting the fights that women in this country fought decades ago.

Today in the UK there is no barrier to women getting into medicine and in fact, it is now the men who are busy claiming that they need quotas. But women do need to have the confidence just actually to ask themselves, “What is it I want?” and “How am I going to achieve this?”. They need to really work out for themselves what they want to do, how they can fulfil their own aspirations, their own dreams and their own desires.

There is no shortage of evidence to show these days that women can succeed in whatever they want to do. You can look at any branch of life, any profession but if a women says: “I am going to make a positive decision not to go into a profession but to be a homemaker”, or whatever she wants to do, she should have confidence to make that decision from the right perspective, from the right place because it’s what she wants to do. Not because it’s what she’s been conditioned to think she should be doing or because it’s what she’s been coerced into doing, or because she feels guilty about doing otherwise.

The number of mature women, friends of mine, and I’m sure you will have friends in the same situation who look back on their lives and say if only I had done X and regret that they’ve thrown away some life chances. That shouldn’t happen. I would like no woman to have to look back and say: “My kids have grown up, they’ve gone away, and what am I left with?”.

Coming up for the Medical Women’s Federation

There’s lots of things coming up for MWF. We are launching a campaign soon which I can’t tell you about just yet – more news about that much later on in the year. We are talking to various colleagues around the country about better utilising our archives. The Medical Women’s Federation is over 100 years old and we have an archive that sits with the Wellcome Trust.

There’s over 100 years of history and apparently, it’s one of the archives which is accessed very frequently. Clearly there is a lot of interest in it, and we’ve been talking with colleagues about making this collection more accessible to the general public.

In the autumn we will be starting a series of evening webinars about matters of interests to our members. So, lots and lots of exciting things are coming up.