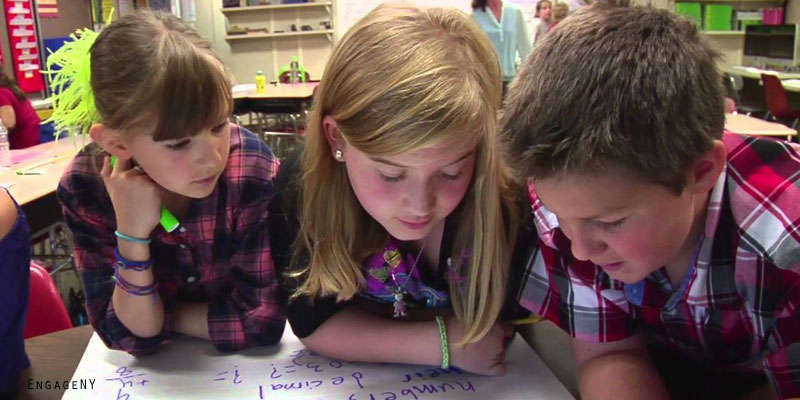 Dr. Eugenie Hunsicker is a senior lecturer in mathematics at Loughborough University. Before this she studied at the University of Chicago, where she received a dissertation fellowship from the American Association of University Women. She went on to become an associate professor of mathematics at Lawrence University in Wisconsin before moving to the UK. A strong advocate for women in maths, she is an active member of the London Mathematical Society and the Royal Statistical Society.

“…many of the most interesting jobs ten years from now may not even exist yet!..”

When I was a kid, mathematics never occurred to me as a profession. I wanted to be a palaeontologist and dig up dinosaur bones. Maths class seemed to consist primarily of endless long division sheets. I remember telling my mom, “I hate maths! It is so boring!” But at the same time, I also remember lots of interesting discussions with my parents about maths.

Another time, I heard my mother talking about calculus with my older brother, and had a long talk with her about derivatives.

Smart, but not a genius

I also had a great physics teacher, who had left after a couple of years of a physics Ph.D. at the university. I loved physics, and I was good at it, but I remember thinking, “You have to be a genius to be a physicist, and I am smart, but not a genius, so I can’t do that.” I never took physics at university. It had never occurred to me to think of mathematician as a career, so it didn’t occur to me to think you had to be a genius to be one. I took it at university because I liked it!

I went to a liberal arts college for university. I had really great and supportive professors there. They saw right away I was talented, and encouraged me to continue. I had two summers of research in combinatorics with Professor Greene, my advisor, which I really enjoyed. So I think by the time I started to think of mathematics as a career, I saw what research was like, and that it was something I could do and enjoy.

No maths Olympiads and not getting lost in the shuffle

If I had been somewhere with a lot of super strong maths students who had all done maths Olympiads and the like, I am sure I would have gotten lost in the shuffle and not been encouraged, or I would have been intimidated. I think going somewhere smaller was really important to getting me into maths.

In my last year of uni, I was thinking of applying to graduate schools, but I didn’t think I was that great, so I wasn’t sure. I guess this was like the “I can’t be a physicist because I am not a genius” stage with maths. I told my advisor this, and his response was great. He said, “Well, most people aren’t particularly good at anything, but you have to do something, so it might as well be something you enjoy.”

This was just the right thing. If he had protested I was great, I would just not have believed him. I know I am not in competition with the very best mathematicians of my generation. But he made that okay.

Okay, so that was really long! So I will stop there. You can look at my CV for the rest..!

Being a maths lecturer 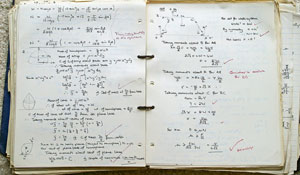 I am a senior lecturer in mathematics. I think undergraduates secretly believe that lecturers are stored in closets and wheeled out just for lectures. I don’t think they have much of an idea what actually is involved in an academic career. I know I didn’t have much clue when I was younger!

For teaching, I have been teaching statistics for the past several years. More on that below, but I really love it. Additionally, I work with Ph.D. students: I have two right now, and another two starting next autumn. I also advise of a set of mathematics undergraduates as their personal tutor. I really like that part of my job – I like to see how students develop and help them think about their future and careers.

Besides this, I am the service teaching coordinator. This means I am in charge of overseeing all mathematics teaching that is done to students outside of the mathematics department. This includes lecturing, mathematics drop in, statistical consultancy, and so on. I like this, but it means I spend many hours in meetings. I remember when I just started my first job at Lawrence University I was kind of excited for my first faculty meeting. Boy did that enthusiasm wear off quickly! So I wish I had less time spent in meetings.

Up until recently, my research was in pure mathematics, at the intersection of analysis, geometry and topology. Analysis is like calculus on steroids. Geometry is about distances and shapes. Topology is about those aspects of shape that are preserved when shapes are deformed. What I liked about this was how the same objects and ideas would come up in these three areas from apparently totally different sources. I think one of the most beautiful and compelling aspects of mathematics is its surprising interconnectivity.

Recently, I have become very interested in statistics and data science. I am sure you have heard a lot about data science recently – it has been getting a lot of attention, especially ‘big data’. What interests me is the new, very broad view of what constitutes data.

It used to be that data was numbers, basically, but now lots of things are dealt with as data – genetic trees, pictures, text, movies, and so on. It turns out that analysing these new data types requires lots of ideas from geometry, topology and analysis, so it is a very exciting area with lots of new connections among different ideas.

Over and above history and convention, why girls opt out of maths earlier than boys

This is the $1,000,000 question! There has been a lot of research and ideas about this recently, but I don’t think we have it figured out yet. I think there are a few things that are emerging, though. First, research suggests that girls think about careers earlier than boys, and I think they also want to be more certain about their career path. A lot of mathematics careers don’t have clear paths, so I think girls don’t so much opt out of maths as opt into something with a clearer career path.

By contrast, in my experience, male students often don’t have any idea what they will do for a career even up to the end of their final year of uni. If they are good students, I think they end up doing a master’s degree or Ph.D. just because someone suggests it and they haven’t thought of anything else yet.

99% of current mathematicians aren’t in the top 1%

Related to this is that girls want to be able to imagine themselves in a career, and imagine themselves being successful in that career. The image of mathematics, like physics, is that you have to be a genius to do it, and that success means winning a major prize or proving a major result, but only a tiny proportion of mathematicians are in this category, so this is a ridiculous standard for success. I always tell students, “99% of current mathematicians aren’t in the top 1%,” but that doesn’t mean these 99% are not successful!

Another reason seems to be that women and girls want a broad education at school. Girls are less likely to take maths and further maths at A-level because this seems to narrow, but to go on to the most competitive universities in maths, this is what you need. So they are cut out from these options already in A-level choices. We see this in the low proportions of women undergrads at the three or four most competitive universities in the UK, which is much lower than at other universities.

The London Mathematical Society has a very broad range of activities, and one part of that is advising on mathematics education policy in UK schools. I am just beginning to learn about that work, so I am not able to comment on it.

The main work of the Women in Mathematics Committee, of which I am the current chair, is with women from undergraduate level and higher. There are several initiatives that the LMS is involved in. Probably the biggest is the Women in Mathematics days held every year. These are one or two day events that celebrate women in mathematics through talks by women academics, women mathematicians from industry and early career mathematicians.

There are also discussions, panels, and the like. It is open to all mathematicians from undergraduate level and up, but generally attracts a large number of women. It provides an opportunity also for advice and networking, and it is great just to be in a maths event with mostly women for a change.

Breadth of career options for those who study maths at university

I think you can do almost anything with a mathematics degree. Many people think about the careers in industry that have very clear graduate routes, like actuarial work, accountancy and finance, or about mathematics teaching. These are great careers, but some of the most interesting careers to me are those for which there aren’t clear paths!

Right now these involve various data analysis jobs, or mathematical modelling or data security jobs, for instance. But many of the most interesting jobs ten years from now may not even exist yet! There will continue to be a lot of really interesting problems in industry, though, and they will need people to solve them, and mathematicians are good at that! You just have to have faith that you have skills that are useful, follow what seems interesting and keep your eyes open for opportunities.

The best advice I was given is probably that there are some jerks, and at first they may seem to dominate, but they are the minority. There are lots of really great people, too, and as you go along in your career, you can choose to work with them.

At Loughborough and in my career, I am really excited about the developments with our new Centre for Data Science and the interdisciplinary projects in biochemistry and materials I have gotten involved with.

At the LMS, we have some new initiatives that we will be launching over the next year. We have just launched a LinkedIn group called UK Women in Mathematics. The goal of this is to make connections among women working and studying in academia and women in mathematics careers in industry. It is intended as a resource for women to find out more about the wide range of mathematics careers available and we encourage any women mathematics students or women who have a mathematics education and are now working to join.

I think of my high school maths teacher, for instance. She never did a Ph.D., though she was smart enough to, but that isn’t important – her career was a real success because of the huge influence she had on her students. We are collecting profiles now, so we are open to suggestions! When we launch the web resource we will also be encouraging young women to tweet their own success stories to add to a feed on the site. So keep your eyes open for these two new initiatives!