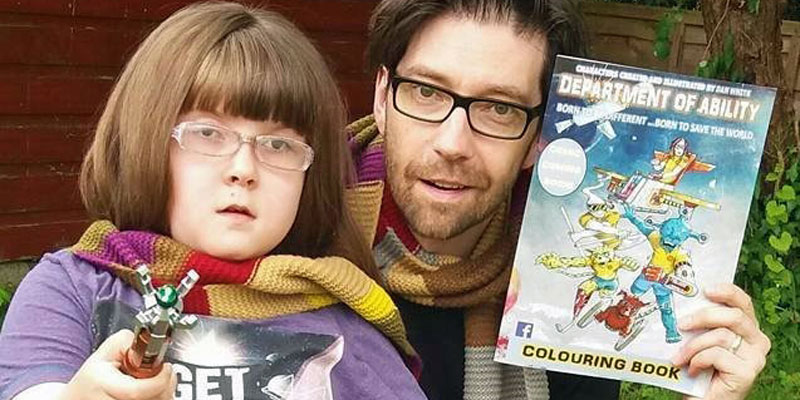 Dan White is on a mission to create and publish the first ever superhero comic for children with disabilities, with superheroes they can relate to, called Department of Ability, inspired by his daughter, Emily, who was born with spina bifida. Dan realised that there are close to 1 million disabled children in the UK alone who would hugely benefit from a comic that would look beyond disability, and promote inclusion. Dan, Emily and the rest of their family are working with the Strongbones Charity who is an enormous support for them, and for Department of Ability.

“…The thing I’m most looking forward to is the day that you can turn on the television or read a book and there’s a sea of disabled people showing their talents off, and not in a tokenistic way – not just, “there’s the character in the wheelchair”…”

Background to Department of Ability

Department of Ability was born on the day my daughter, Emily, received her first wheelchair and together we decided to find something she could relate to, either on television or in the books she was reading, so she could say, “there’s someone like me” enjoying their life in a really positive way, but we found those images lacking completely. There was nothing strong or that wasn’t tokenistic for her to relate to, so we decided to have a go at creating some images ourselves, and also change the entire media at the same time!

I’ve always been an artist – my dear, wonderful, late dad was always prompting me and giving me paper to draw on. He was my biggest inspiration.

But sadly, art doesn’t pay the bills, so I had to go and work at a plumbers’ merchant to supplement my income while I was drawing on the side, until eventually the decision was taken for me. The project was gathering so much momentum, I had to just bite the bullet and take the risk of going self-employed with it. Thankfully it’s reaching far across the globe as we speak and I feel very privileged to have created something that people are really taking to their hearts.

Overcoming fear of failure to build a more inclusive society 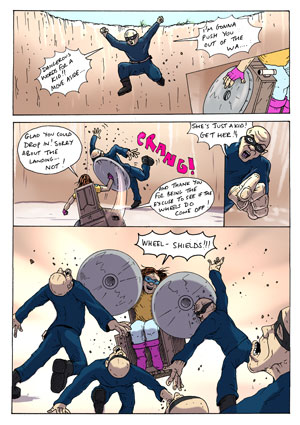 There’s always a fear of failure and not wanting to go back to a past existence and my old job. Also, when I show these images to the wonderful disabled community that we’re part of, they’re filled with happiness about it and they’re constantly saying ‘thank you’. So I feel it should grow because there’s a whole community of fantastic writers, musicians, filmmakers, actors and so on who aren’t getting their chance, in today’s so called ‘inclusive society’, to show the wider world what they’re capable of.

I’m hoping that these characters can be a precursor to making this happen, so that disabled people themselves will become a mainstay of television, not just because they’re disabled, but because they have the talent. So I’m hoping this will be the start of something much bigger.

Sharing our story through social media

Social media is an absolute imperative in this day and age. You cannot do without it, even if it’s one of those things you dread and you don’t want to be part of. If you have anything you want the world to see social media is definitely the way to go.

As my wife will tell you, I’m an incessant tweeter and Facebook poster for everything I do – to generate the interest and keep it going to get the word out to charities, schools, TV companies, animators, production companies – not just here in the UK but also in America. If I’m not writing or drawing I’m network network network 24/7.

We’ve borne some wonderful fruit from that network. I’ve got a fantastic agent called Jess, who’s taken me under her wing and helped guide me. She’s taken a lot of stress of my shoulders and she’s helped me to forge incredible relationships with many people – great supporters like Matthew Wright, from The Wright Stuff, who’s had me on his show, and he’s stayed in contact. There’s The Today Show in the USA who have popped up.

The more you constantly network, the more interest gathers and grows. I’ve got into the habit now of always networking. Networking on social media is the way people see information these days.

A starring role for Emily 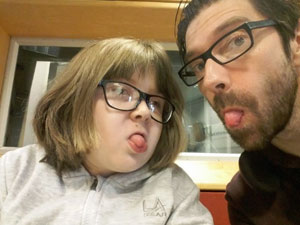 Emily and I started on local television – South Today – which led to BBC Breakfast Solent, which covers nearly all the south of England. They’ve been some of the most important people because they now have us back on a regular slot every month to give them updates.

Emily decides what she wants to take part in. The first rule is that if she doesn’t want to do anything, she doesn’t do it. She was more than happy to do South Today and The Wright Stuff. She loved doing The Saturday Show with Gabby Roslin. That was a great thing in itself for Emily because they let try out roles in the studio after the advert break, which she loved. Most of the time she’s very keen. Everyone in the whole family, including my dear mum – bless her, is talking about it the whole time. It’s just wonderful.

Ambitions for the project moving forward 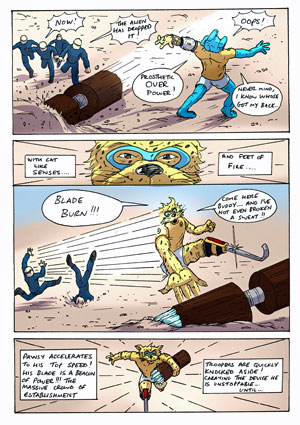 My agent, Jess, is amazing. She’s got all kinds of contacts involved, so we’re trying to work out how to bring them all on board. We’re trying to get the last few pages of the story finished because there’s a lot of mainstream publishers who are interested in what we’re doing. We’ve also got film and television interest coming in as well. I’ve been speaking to leisure companies too.

I’ve been to Parliament to see the Shadow Minister for Culture, Media & Sport to find out how they can help. There’s constantly all sorts of things going on. I’m also off to Dubai to close an international conference on disability media inclusion with delegates from around the world. We’re off to New York next year to set up our own Comic-Con in Syracuse University. Every day it’s leading on to something else.

The thing I’m most looking forward to is the day that you can turn on the television or read a book and there’s a sea of disabled people showing their talents off, and not in a tokenistic way – not just, “there’s the character in the wheelchair”. I want them being there because they have the talent. It’s just such a shame that it’s not happening at the moment. Why not? It’s the 21st century after all.

How Womanthology readers can support

We’ve just held a pre-launch party for the comic, hosted by Strongbones Children’s Charitable Trust, who have helped enormously with the project since day one. We had a party over all the floors of Hamley’s Regent Street store in London, with over 300 kids and their families / carers attending, along with our great friends, Paralympian, Hannah Cockcroft MBE and Jack Binstead from TV’s Bad Education there to support.

A colouring book, t-shirts and mugs are all available online at www.departmentofability.com right now.

I’d be very grateful if Womanthology readers could share us as far and wide as they can, and tell whoever might be able to help us in any way. So, for example, the project has led to me doing comic book workshops at schools. We’re using comics to change perceptions and make a difference.

I’m very proud of Emily and this is all for her.