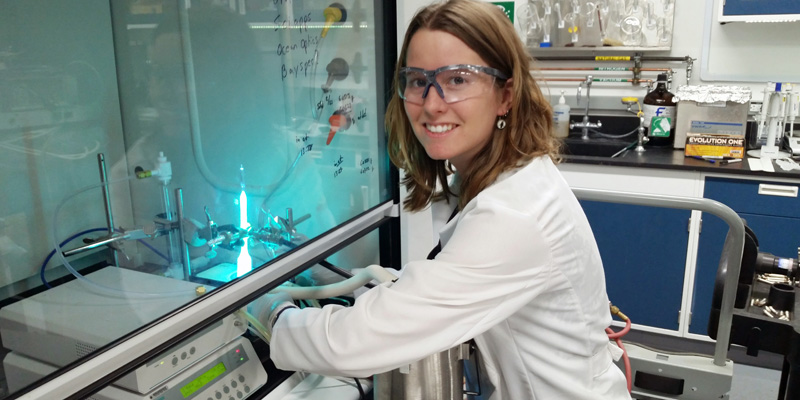 Dr. Morgan Cable is a technologist in the Instrument Systems Implementation and Concepts Section at the NASA Jet Propulsion Laboratory in Pasadena, California. She is also the Assistant Project Science Systems Engineer for the Cassini Mission, which has been exploring the Saturn system for over ten years. Morgan’s research focuses on organic and biomarker detection strategies, through both in situ and remote sensing techniques.

“…I love chemistry because that’s where bonds are made and broken, where molecules are born…”

Space on the brain

Even at a young age, I was always interested in science. My parents got me and my two siblings (I’m a triplet) involved with science fairs in elementary school, and I think that left a lasting impression – all three of us ended up in science or medicine.

I grew up in Titusville, Florida, which is right across the water from Cape Canaveral. Watching the space shuttle and other rockets launch literally from my own backyard made space and NASA a regular part of life. I realise now how lucky I was to experience this, and I’m grateful for that exposure.

I seemed to have space on the brain from the start, so doing a science project about ‘Life on Mars’ in 8th grade seemed the natural choice. I tested a type of anaerobic bacteria, Shewanella putrefaciens, to see if it would grow in a simulated subsurface Mars environment. I remember driving with my dad to Brevard Community College (my science teacher wisely vetoed any experiments culturing bacteria at home) at 2 o’clock in the morning to test the growth of my bacteria (I checked them every six hours). And after 48 hours, they grew! I was hooked.

I decided to pursue a degree in chemistry, because to me that was the fundamental science of understanding how the universe worked. Physics was about subatomic particles, or nuclear fission or fusion in stars – it seemed too ethereal for me. Biology, while fascinating too, was complex and often unpredictable, making it tough to design an experiment to really understand what was going on. 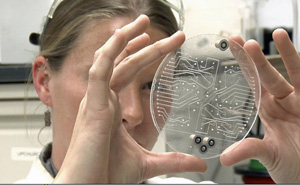 I love chemistry because that’s where bonds are made and broken, where molecules are born. With chemistry, I can break down a complex system into an experiment I can do in the lab, and if I do enough, I can put the pieces together and solve the puzzle.

When I was a junior in college, I was lucky enough to do a summer internship at the NASA Jet Propulsion Laboratory (JPL) through the NASA Undergraduate Student Research Program (USRP). That summer I lived in the dorms at Caltech (California Institute of Technology), and I did research in a lab at JPL that was focused on searching for life in extreme environments.

I worked on developing a sensor based on lanthanides, one of the rows orphaned at the bottom of the periodic table – the actinides are the radioactive row; the lanthanides just have lots of electrons and glow pretty colours. The sensor used terbium to detect bacterial spores, one of the toughest forms of life – these little guys can survive in space! I had found a way to fuse my two passions – space and chemistry – into one project that had implications for the search for life outside of Earth.

I fell in love with that project and JPL, and I knew this was where I wanted to be. So, I applied to Caltech for graduate school, and was able to continue that work and turn it into my Ph.D. thesis.

Lab on a chip

After completing my Ph.D. in chemistry in 2010, I found a different lab at JPL that was doing some really cool stuff – taking benchtop techniques and shrinking them down so they could be performed by a spacecraft remotely. It was called ‘lab on a chip’.

This technique is super powerful – think of everything a chemist might do in a normal lab setting: dilutions, extractions, various measurements. Wouldn’t it be great if you could do all of that stuff on Europa or Enceladus? That’s the idea with lab on a chip. So, even if we land on a place like Titan and find something we didn’t expect, we can ‘reprogram’ the chip to do a different analysis without a human having to be there. It’s perfect for searching for life elsewhere, and that’s what we were developing these devices to do.

I worked on optimising these devices to operate at low temperatures, so they could be used in environments like the cold surface of Titan to understand the different organics there. It was a lot of work but a very rewarding experience!

After finishing my postdoctoral research, I got hired as a ‘real person’ at JPL in 2013. This meant expanding my knowledge base and exploring new avenues to pursue planetary science and space exploration. I started working on the Cassini Mission as a Project Science Systems Engineer – basically communicating science to the engineers on the team, and engineering to the scientists.

It was like drinking from a firehose the first few weeks, but it was absolutely worth it. I worked on the Cassini Mission until its final plunge into the atmosphere of Saturn in Sept 2017. And I took that incredible experience and applied it to the other mission teams I’ve worked with, including the Europa Lander mission concept. This mission isn’t ‘real’ yet – it still needs to get funding approval from Congress – but if approved it would search for biosignatures on the surface of Europa.

But that’s not all I work on these days. I am very interested in returning to the Saturn system, specifically to search for life in the plume of Enceladus and I have been working with a team to try to get a mission funded to return there and finish what Cassini started. I am also still able to get into the lab once a week to do some Titan chemistry experiments, which have led to the birth of a new field – Titan ‘petrology’.

On Titan, rocks are made of organic molecules, and we are learning more and more about the types of physical and chemical interactions between them. It’s an exciting time to be a planetary scientist, and I feel incredibly fortunate and humbled to work among such excellent humans (and robots!) at JPL to try to answer some of our most fundamental questions, like whether we are alone in the Universe.

The Jet Propulsion Laboratory is what’s called a Federally Funded Research and Development Center. Basically, that means all of the ‘stuff’ at JPL belongs to NASA, but all of the people belong to Caltech. JPL was founded by a few Caltech graduate students and some rocket enthusiasts whose experiments with rocket fuel became too dangerous to perform on Caltech’s campus, so they went into the foothills nearby in the San Gabriel Mountains and built a bunker. 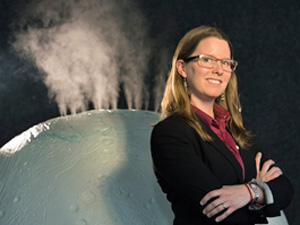 Now, JPL has over 6000 employees and works on everything from astrophysics to Earth science to astrobiology. Our mantra is “Dare Mighty Things” – we do the things that no one else does, because they have never been done before. I love that.

My role day to day

My days vary, depending on the project that requires most of my attention. Most of the big missions (like Cassini or the proposed Europa Lander) involve a lot of meetings. Some days are all meetings like this. Other days I’m in the lab, doing an experiment involving liquid nitrogen, lasers (we do a lot of Raman spectroscopy) and often hazardous chemicals.

Once I year I’m fortunate enough to do field work in Iceland – I’m part of a team that is studying the fresh lava fields there as an analogue environment for Mars. One of the things I love about my job is how much it varies, which keeps things interesting!

The best part of my job is the people I work with. I heard a saying once: “If you’re the smartest person in the room, you’re in the wrong room.” I absolutely believe this. I find that by surrounding myself with people who are smarter than me, it forces me to push harder, to do more, to be better, and we all excel. Plus, I get the opportunity to work with engineers and other scientists with very different backgrounds form my own, so I feel like I’m always learning something new.

One of my projects involves trying to understand Titan, the largest moon of Saturn. This world is fascinating because it’s so similar, and yet so different, form our own Earth. Titan has clouds, rain, rivers and even large seas, but this is all formed not by water but by liquid methane and ethane – hydrocarbons.

This is because it’s much, much colder there than Earth. So, we see similar features on Titan (river channels, streambeds, even dunes), but they are made up of entirely different stuff. I’m fascinated by this, and we are trying to learn more about these materials in the laboratory, but the most fascinating part is whether life could exist in this ‘alien’ world. If it did, it would be very different from any life on Earth, because it would use different chemistry.

The basic building blocks of life as we know it (amino acids, fatty acids, etc.) work well on Earth because they work well in liquid water. However, these same building blocks do not work in liquid methane or ethane at all – these solvents are nonpolar, as opposed to water, which is polar. So, if life were to emerge on Titan, it would have to make itself out of entirely different molecules.

We are trying to come up with ways to search for this kind of life. It is a unique challenge, and I really enjoy trying to think up new ways that life might exploit to survive in such an alien environment.

I think the best way to make STEAM careers more equal in terms of gender is to continue to provide success stories of amazing, capable women. And not only that, but we need to make their stories relatable – none of us are superheroes, we are human just like everyone else. I became a scientist because I had strong female role models – friends and family – who encouraged me. I think the same formula would work for many other girls, if given the opportunity.

The best advice I can give to anyone is to pursue your passion. The reason I feel that I’m successful is because I absolutely love what I do, but that discovery didn’t happen overnight – I spent two years doing internships that helped me realise what part of science I did NOT want to go into. But that time was not wasted – it helped put me on the path to be happy. So, pursue your passion, whatever it is, and if you are doing what you love you will be successful (because you love it, and you’ll work hard at it) and you will be happy.

I’m not sure exactly what the future holds. I hope the Europa Lander mission concept gets funded so we can land on that fascinating surface and search for biosignatures. I hope a mission to Enceladus gets selected, so we can dive through the plume and hunt for life there too. And I hope that I continue to get the chance to pursue answers to these questions that keep us looking up, with wonder and a drive to understand the Universe and our place in it.