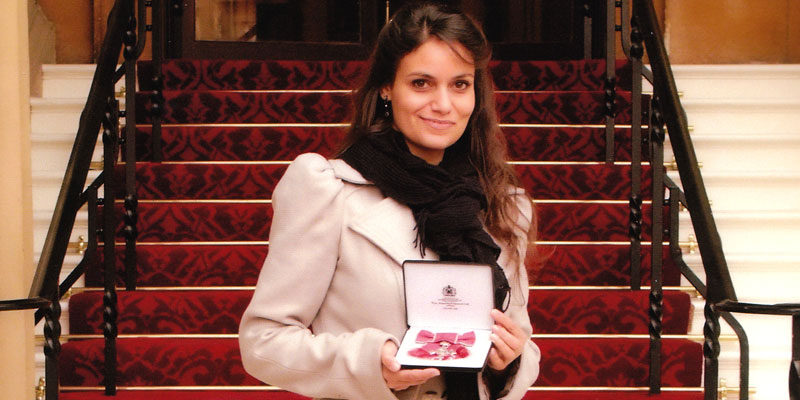 Rachel Lowe MBE is an award winning female entrepreneur who created a board game called ‘Destination’, which she took to BBC Dragon’s Den, but went home empty handed after one of the harshest roastings the show has seen. Following on from a roller coaster experience of building her business and then losing almost everything, Rachel came out of the other side with the realisation that ‘nothing is impossible,’ and this became the theme for her latest venture, fragrance and accessories brand ‘SHE WHO DARES’.

“…In the crash of 2008/9 the recession hit my company hard and due to unforeseen circumstance and factors entirely out of my control, I lost everything including my home, and very nearly my sanity!..”

Rachel, you’ve had numerous different careers. Please could you talk us through your various ventures?

Well I started out as a taxi driver whilst at university and that’s when I had the idea for the board game Destination. It all started there really. I entered the idea into a competition at university and won some money, which I used to set up my first business. I took my idea into the Dragon’s Den and got famously slated for not knowing my numbers!

The Destination London Game went on to be a best seller in Hamleys of London. I spent the next six years building the brand and developed 23 editions which included versions for Walt Disney and Warner Bros.

In the crash of 2008/9 the recession hit my company hard and due to unforeseen circumstance and factors entirely out of my control, I lost everything including my home, and very nearly my sanity!

BBC Panorama covered my story and through this I got lots of interest in the Destination brand which is how I met my new business partner Simon Dolan. He explained the process would take a while and he gave me the opportunity to start something new.

So I set up a new company with Simon for another brand called SHE WHO DARES. It was inspired by the MBE which I received at Buckingham Palace and my vision was to create a gift brand to acknowledge the achievements of women, so they could feel the same sense of pride that I did that day at Buckingham Palace.

From my research I found that fragrance was the most bought gift item, followed my jewellery and handbags, so this is what defined the gift range.

I now have a range of fragrance and accessories which are being sold in stores across the UK and we made it into the Top 10 fragrances in Jarrold Department Store in Norwich, they are like the Harrods of that region, so I was absolutely thrilled.

So it’s fair to say ‘what doesn’t break you makes you stronger’?

It absolutely is and I believe that everything you do, and all the hurdles you have to overcome, just add to who you are and life will keep throwing you challenges. Life I suppose would be pretty dull without them!

Who are the people who you have relied on in good times and bad?

My family and friends – you soon realise who your real friends are when things don’t go according to plan.

When did the realisation that ‘nothing is impossible’ hit you?

I think it was when I met Simon and had another chance to do something amazing. After I lost everything I didn’t think anyone would want to work with me again, and Simon made me realise that there was never anything wrong with me or the games, it was just unfortunate circumstances that led to a dark time for me. I never imaged I would get it all back again.

What made you decide to create your new brand around this?

I wanted to created the SHE WHO DARES brand around the message of ‘Nothing is impossible’ as I believe that to achieve great things you will always have to push the boundaries and do things perhaps you don’t feel comfortable doing. You have to dare to step out of your comfort zone. Sometimes the only thing standing in our way is ourselves.

The response to SHE WHO DARES has been amazing. I have met some incredible women already and part of our mission is to celebrate women who deserve some acknowledgement and recognition for all of the amazing and remarkable things that they do.

The Destination brand is still going strong too. How have you extended this?

Yes indeed I am very proud to say that the Destination brand is going strong.

Since getting the brand back I have produced a Harry Potter edition (Destination Hogwarts), two Olympic editions (Destination London 2012) and the most exciting one of all is our latest collection of games under our Downton Abbey contract. We have a Destination Downton Abbey board games and also a Downton Abbey Compendium of Parlour Games and Playing Cards.

It is a very exiting time. We also have the 10th Anniversary edition of Destination London being launched later this year and also a Destination Great Britain which has been sponsored by many of the UK’s most famous attractions.

Are you still in contact with any of the Dragons?

I have met all of them since the Den except for Peter Jones. They are all lovely really. They just pretend to be scary for the TV show!

Do you think shows like Dragons Den and The Apprentice portray business as it really is?

I think those programs really are more for entertainment than anything else. Deals are done, and entrepreneurs do get investment, but I think the ultimate objective for the producers is to achieve ratings and viewing figures and so the drama of it works very well. It didn’t do me any harm!

What did it mean to you to have your contribution to Services to Business recognised by the Queen?

At first I wasn’t going to accept it. I didn’t think I deserved it, as my business had just gone under. But my family made me realise that it’s not about how much money you have. The honors are to recognise your achievements, and nobody can take that away.

How has being a mother helped you in business?

Well it certainly has been a lot of juggling around! I love being a mum and my girls have kept me going. They are both very ambitions young ladies. I hope they follow their dreams, but ultimately I just want them to be happy, whatever they end up doing.

In your experience, are male and female entrepreneurs different in their approach to business?

To be honest, I have been so wrapped up with my own businesses I can’t say that I have really noticed!

I know that as a female entrepreneur myself I make a lot of judgments and decisions based on my intuition. I can’t really speak for other people, but my intuition has served me well.

What would your advice be to other female entrepreneurs?

I think the most important thing is to try and strike a balance. Children grow up all too fast. Don’t miss out on those moments that you can never get back.

What other support would you like to see for female entrepreneurs?

I think women’s networking is always good.  I recently spoke at the Vodafones Women’s Network event and I met some incredible women who have only inspired me to just keep at it. We are very supportive of each other. We want each other to succeed.

What are your plans for ‘SHE WHO DARES’?

My plan for SHE WHO DARES is to establish it here in the UK and then take it into America. I do have a dream for the perfume, for it to one day be as established and recognised as any other successful fragrance brand, but known for being British. Everything is made here in the UK, and that is something that I am very proud of.

I know the fragrance industry is hugely competitive, and to one day sit along side the likes of Chanel and Prada is a big dream…. But I believe that nothing is impossible.