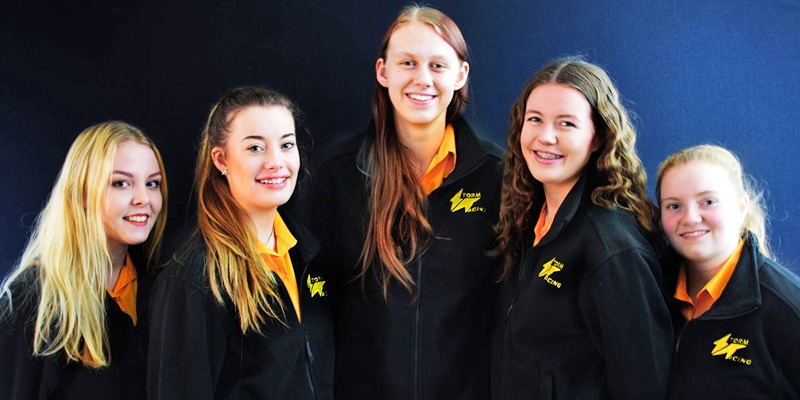 Dani Taylor is a member of Storm Racing, an all-girl team of students from Sandbach High School and Sixth Form College, where her role was as a manufacturing engineer. They participated in the F1 in School National Finals held at Silverstone circuit in March, and they have won the F1 in Schools Technology Challenge ‘Women in Motorsport Award’, supported by Dare To Be Different. Three of the team recently went on a school trip to NASA’s Johnson Space Centre in Texas.

“…one of my favourite activities was the one of the robotics challenges where we had to build an end effector for a robot to pick up and carry space rocks. As a manufacturing engineer myself, that was right up my street…”

I’m Dani, I am a member of Storm Racing at Sandbach High School. Our team manager, Emily, has spoken on our behalf in previous Womanthology articles, but in case you’ve missed them, we’re an F1 in Schools team who’ve been competing for four years and we’re now in our last year at sixth form.

The aim of the competition is to design and build and miniature F1 car to race down a 20m track powered by a small gas canister. The competition is aimed at students interested in STEM and we all have a role to play within the team; my role is the manufacturing engineer. It’s my job to make sure the car we design is manufactured accurately and if there are any problems on the race track on the day of the completion, my job to fix them.

Besides the F1 in Schools competition, three of us on the team have recently been on a school trip to NASA’s Johnson Space Center, Texas. This came about after our school organised the trip so students from years 10-13 could take part in a week-long residential at Space University alongside an American school from New Orleans.

For me, it’s difficult to pick out just one thing I learnt whilst I was there as there were so many. However, one of my favourite activities was the one of the robotics challenges where we had to build an end effector for a robot to pick up and carry space rocks. As a manufacturing engineer myself, that was right up my street as it provided me with a different challenge and I had to apply my previously learnt knowledge in a completely different situation.

Another highlight for me was meeting some of the most famous female astronauts, Anna Fisher and Peggy Whitson. Hearing about their time at NASA, expeditions they’ve been on and how they got to become astronauts was incredible. These women are probably the most inspirational women I think I’ve ever had the privilege of talking to.

As well as the STEM activities, working with the students from the other school was exciting and challenging too. I was in a team of four, consisting of me that three other students from the American school. This was an important part of my experience at Space University as working with people I was unfamiliar with, that had different backgrounds and areas of expertise, was a learning curve I will be able to apply in any future work environment.

The communication and social skills that I have learnt and ways to approach these kinds of challenges will be skills that I am able to use in my future career there these were just as important at the STEM knowledge I acquired whilst I was there.

Storm Racing – the next chapter 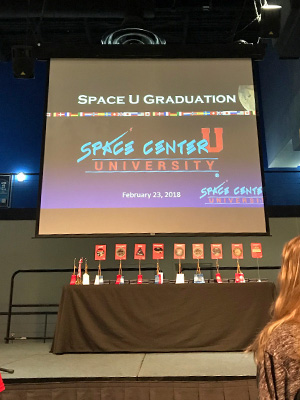 Upon returning from our incredible experience at Space University, the National Finals for Storm Racing were just three weeks away. After competing at the F1 in School National Finals held at Silverstone in March, we finished our most successful, 5th in the country out of 30 other teams as well as picking up the Women in Motorsport award.

Although we were upset our time in the competition has to come to an end (this was the final year were we able to compete due to all five of our members heading off to university this September) we are looking forward to the next chapter. Over the coming months, we are going to be helping form a new F1 in Schools team in our school and guide them into the competition so they are able to gain all the experiences we have been able to over the last four years.

F1 in Schools has been a memorable and exciting experience for me, it’s helped me learn a whole variety of skills which have helped me in my A-level studies and I am proud to have been a part of the team and all we have achieved. We hope that the next team we bring into the world of F1 in Schools can go one step further than us and compete at the World Finals.

Even though we’ve come to the end of our journey, it’s the start for some younger students so any support that you’re willing to give, will give these students the building blocks to succeed in the competition and hopefully exceed our achievements.