You are currently reading Issue 34: Women in Engineering Day, June 2015
Skip to content 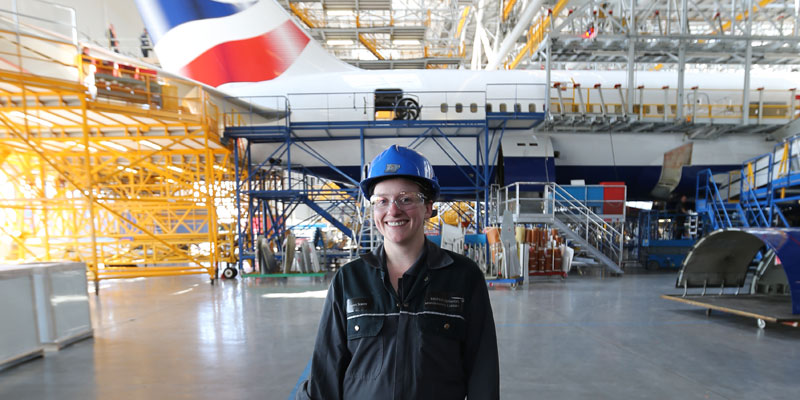 Lauren Stacey is a Technical Team Leader at British Airways Maintenance Cardiff (BAMC), where she has worked for nine years after she completed a degree in Aircraft Maintenance Engineering at Kingston University. She met her husband Paul, who is a technician at BAMC, when they were working on the same engine! Her brother is Gareth Berrill, also works at BAMC as a mechanic in Bay 1 (Lauren works in Bay 3!).

“…As an aircraft engineer I have to deal with different challenges daily. Recently I have spent a lot of time running the landing gear team, and have been involved with the removal and installation of the gear, which you can imagine is quite a big job. I have also got to be flexible and work on the priority areas, so one day I may be working engines, the next I might be in cabin or wings…” 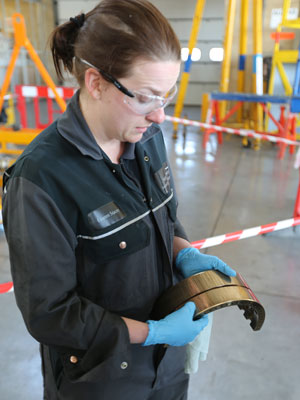 I have been working at British Airways Maintenance Cardiff (BAMC) for nine years and I joined as a mechanic after completing a foundation degree in Aircraft Maintenance Engineering at Kingston University. During this time, I also completed my modules to gain a B1 licence, which is a qualification required to work as an engineer in the airline industry.

I worked my way up through the roles of technician and authorised technician and I now work as a technical team leader. I have been fortunate to receive training for Boeing 767s and Boeing 747s. As a team leader, I am responsible for a team of mechanics and technicians, scheduling work and inspecting the aircraft and its components. I check the quality of the work of my team and I also certify their work.

Nothing compared to working on aircraft

I first got interested in engineering when my design and technology teacher, (at Lewis Girls’ School, Ystrad Mynach) got me and a few others involved in a Saturday engineering club. At the age of 14, I did work experience at GE aircraft engine services (GEAES) at Nantgarw, and it was at this point that I knew I would like to work on aircraft.

I attended a weeklong residential course at Cardiff University where the different areas of engineering such as civil and mechanical were explained in depth. I found that nothing compared to physically working on the aircraft parts, and so I returned to GEAES during my A Levels for some additional work experience to confirm that it was aircraft maintenance that I would like to do at uni.

Working together to get things done 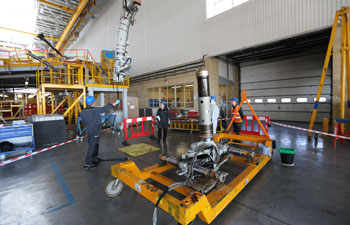 As an aircraft engineer I have to deal with different challenges daily. Recently I have spent a lot of time running the landing gear team, and have been involved with the removal and installation of the gear, which you can imagine is quite a big job. I have also got to be flexible and work on the priority areas, so one day I may be working engines, the next I might be in cabin or wings.

I also enjoy the teamwork at BAMC, we have a lot of banter but we get things done and we all gel together really well as a team.

Advice to women and girls considering careers in engineering

I would advise them, if at all possible to arrange some work experience in the industries that they are interested in. BAMC works closely with Careers Wales to provide opportunities for work experience within the hangar and other departments. Talk to friends or family working in the industries so you get a good feel for what their job involves. Sign up for any additional courses that are being held through organisations such as WISE (Women into Science and Engineering).

How British Airways and BAMC support a diverse workforce 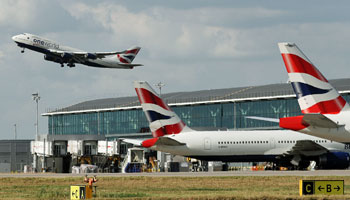 BAMC has an apprenticeship programme, and I have noticed an encouraging increase in young female apprentices in recent years. It is important for young girls to know that although there are certain industries, which have traditionally seen as ‘male dominated’, it doesn’t mean that these should be ruled out as career options for women.

I have been successful in my career at BAMC, starting as a mechanic and working my way up to team leader. I have worked hard and had the right attitude, but I wouldn’t have got where I am without the support of my co-workers.

BAMC are currently in talks with Women Into Science and Engineering (WISE), and we are hoping to work closely with them so we can promote women in engineering.

BAMC has a good relationship with the University of South Wales and I was privileged for BAMC to sponsor me to do my ‘top up’ degree this year so I now have a BSc in Aircraft Maintenance Engineering. My next challenge is to get a B2 licence, the avionics version of the B1. This is quite a lot of work and I also need to get practical experience. Aircraft such as the Boeing 787 have advanced technology and it is beneficial to have a dual licence (B1 and B2) to work on them.

I was fortunate that engineering was highlighted to me as a potential career choice while I was in school and it is important that other young women have the same opportunity so that they can make an educated and informed choice for their future.

Engineering and science has been typically male dominated and we need young ladies to understand that this isn’t a barrier in itself. We need these organisations to prepare them for their futures by promoting these industries and take away the ‘stereotypical’ outlook. 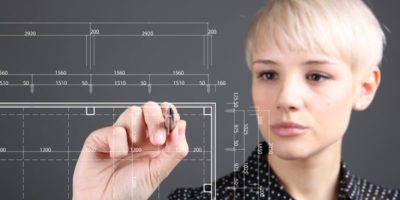 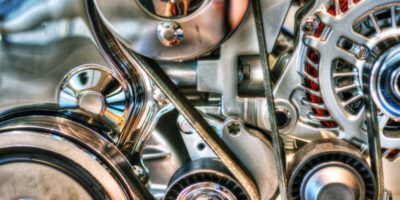 Female engineers conquering challenges on and off the racetrack – Philippa Oldham, Head of Transport and Manufacturing at the Institution of Mechanical Engineers 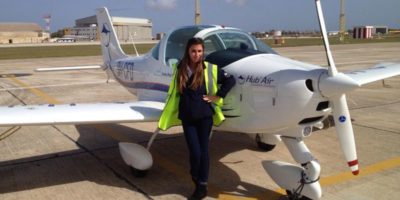 Pilot for hire: Charlotte Leclerc dreams of becoming a professional pilot and she’s pulling out all the stops to make it happen