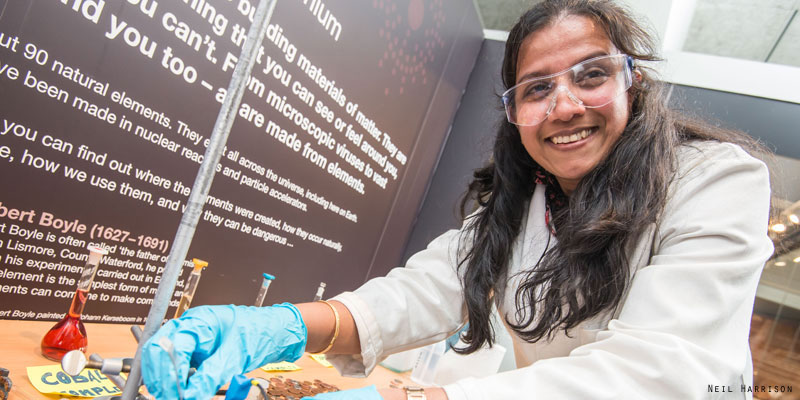 Dr. Geetha Srinivasan is a senior research fellow at Queen’s University Ionic Liquid Laboratories (QUILL) in Belfast, having joined in 2006 for her post-doctoral research fellowship, after receiving her M.Phil. [Master of Philosophy] from Avinashilingam University in India, followed by pursuing a Ph.D. [Doctor of Philosophy] research role at the Central Electrochemical Research Institute. Her specialisms are petrochemistry, electrochemistry, electroplating, conducting polymers and drug delivery.

Geetha was coordinator of the Belfast Soapbox Science event, which took place on Saturday 20th June 2015.

My career to date and my route to chemistry: Chemistry is the basis of life

To become a medical doctor has been my childhood dream but couldn’t study medicine due to personal circumstances (I lost my parents). The science subject that I always had an interest next to medicine was chemistry and therefore went to study chemistry at undergraduate level. During the course of three year time I realised my inclination to the subject as I always believed that, “chemistry is the basis of life”.

I am a chemist. Everything in the world is built by building blocks called atoms and molecules as called in chemistry language. For example it is exciting to see how these molecules join together to form a substance such as plastic.

Chemistry allows scientists to create new materials using these building blocks. I develop materials that allow current to flow through them but that are environmentally safe and cheap.

My research is to produce an advanced method to deliver drugs directly to the site of infection, eliminating the conventional route of drug administration orally in which the drug often loses efficiency before it reaches the site of infection due to biochemical reactions happening in the body.

An electronic probe loaded with the necessary drug in the right quantity could be introduced through a catheter into the body. When an external electric potential / current is applied to this probe, the drug in the probe will be delivered into the body fluid. This will avoid various side-effects and the drug can be solely used to cure the medical problem at a specific site.

Special materials that can conduct a current and at the same time are safe for the human body need to be developed.

Marriage of male and female can yield children – likewise knowledge and innovation from both genders from different perspectives can lead to better inventions.

Breaking down barriers for women in chemistry 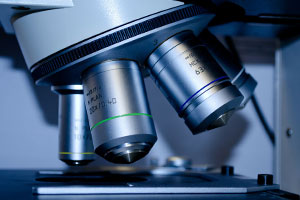 Women are naturally multitaskers and perseverant, which are the key qualities to sustain a research career, but somehow, I’m not sure whether naturally or influentially, women leave science after a few years or would rather pick up a project management role. It can be attributed to various reasons like family development, job security and also sometimes getting fed up in the lab.

I think therefore it is important in general to raise and promote the significance and nice things about science careers to keep women self-inspired.

Mostly after the maternity period women struggle to catch up with the science career as it demands continuity. At post-doctoral level a woman returning back from a career break needs to work almost to the extent of double or even triple sometimes to catch up the speed of other male colleagues. This also becomes extremely difficult with parenting challenges at home.

There should be a clear balanced mechanism to judge the career progression of female candidates under such conditions – although there are some fellowship schemes (not many) which are exclusively for such cases. However they are highly competitive.

Following my L’Oreal / UNESCO For Women in Science Award in 2012, I joined their network of women scientists across the country and was introduced to the Soapbox Science. Last year I was a speaker in the Dublin event where I totally fell in love with this event as it is a great platform for women in science to communicate to the public very naturally regarding their research area.

There is no hassle of presentation slides etc., so it’s almost like talking to your next door neighbour regarding research. It is my attempt to bring this platform and wonderful opportunity to Northern Ireland, which I made my home.

Belfast event: 13 innovative scientists and an honour to attract the younger generation to the exciting world of science

I always felt that I was not alone in this organising status as there had been good guidance from the central coordinators with prior experience. However, at the start it seemed like a massive job to handle and implement it all alone. But progressively it is amazing to see the involvement from various sectors to support this event. It has been very welcome so far and eagerly anticipated.

Here we are now ready with 13 innovative scientists from various disciplines ranging from all STEMM [science / technology / engineering / maths / medicine] subjects. I think it is an honour to attract the younger generation to the ever exciting world of science and make the public aware of what is a research world all about.