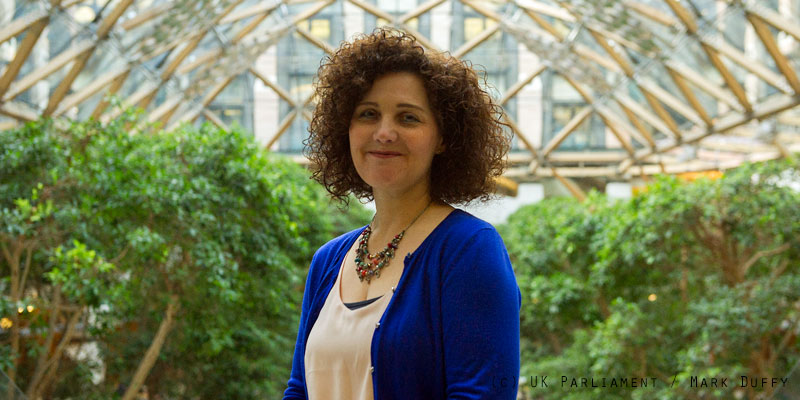 Lynn Hobson is Senior Community Outreach and Engagement Officer (North East, Yorkshire and the Humber) for the Houses of Parliament. The North East, Yorkshire and the Humber Parliamentary Outreach service aims to create awareness of the work of Parliament and show how the debates and decisions of the House of Commons and House of Lords are relevant to people in the region. The Parliamentary Outreach service also promotes engagement with the processes of Parliament, demonstrating how the public can get involved at a local and national level.

“…It would be great to have more women putting themselves forward to Parliament. First, we need more women to realise that politics touches every aspect of our lives, from the food we eat to legislation around the clothes we wear and what kind of health services are on offer. Whatever your interests – sport, the arts, environment, business – the UK Parliament examines aspects of all these things and more…”

I know it’s a cliché but Parliament is an amazing and exciting place to work. It is steeped in history, where our laws are made and important topics are debated.

Originally, I studied law, so when the opportunity arose to work with Parliament – in an outreach role – I took it with both hands. I’ve also worked in education, as a project manager, and for BBC Learning, so I’m used to working with a diverse range of subject areas and partner organisations. It’s the same in this job; one day I’m working with a neurological advocacy charity, the next with apprentices from the construction industry or a group of adults with autism.

The North East, Yorkshire and the Humber is a large geographical area, so a lot of time is spent on trains! I work with a wide variety of different types of organisations to deliver workshops about Parliament. These include housing associations, youth groups, community organisations and charities. The most popular workshops I run are – People, Power and Politics: An Introduction to Your UK Parliament and Are you influential? Get Heard in the UK Parliament, which is a campaigning workshop.

A great deal of my time is spent developing new contacts in organisations who work with people in our target groups and then delivering workshops to those people.

Working regionally enables Parliament to reach people who may never have thought about sending in information to a Select Committee inquiry, or asking an MP or Peer to raise an issue on their behalf. It’s a way of getting different perspectives, different points of view and different life experiences in front of Government ministers.

Parliament – a vital part of our democracy

Parliament is a vital part of our democracy and its important people know that it scrutinises the work of Government and holds it to account. Individuals and organisations can work with Parliamentarians to help paint a clearer picture of issues happening around the country, things that need challenging that ultimately the Government is responsible for.

People can also raise issues directly by creating an online petition to Government or Parliament.

Helping women to get their voices heard

We have workshops specially aimed at empowering women, giving them the information they need to start getting their voices heard and how to get an issue on to the UK Parliament’s agenda.

It would be great to have more women putting themselves forward to Parliament. First, we need more women to realise that politics touches every aspect of our lives, from the food we eat to legislation around the clothes we wear and what kind of health services are on offer. Whatever your interests – sport, the arts, environment, business – the UK Parliament examines aspects of all these things and more.

The Women in Parliament programme aims to get more women involved.

If you are interested in finding out more about Parliament go to http://www.parliament.uk/get-involved/ and try some of the suggested activities:

Coming up next for me and the Houses of Parliament

Over the next few weeks I’ll be delivering workshops and making new contacts with organisations who want to find out more about Parliament. I’m also looking for people who deliver citizenship or democracy as part of their work with community groups or young people as we are launching a new train the trainer programme this summer.