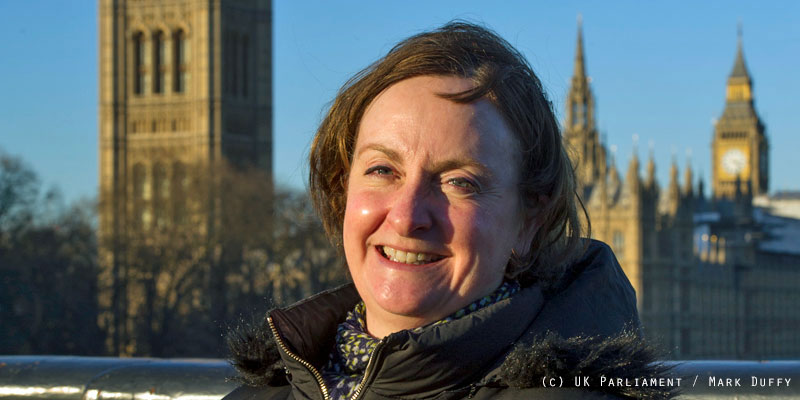 Portia Dadley works as a sub-editor for Hansard in the House of Commons. Hansard is the commonly used name for the Official Report of proceedings of both the House of Commons and the House of Lords. It is published daily when Parliament is sitting and records what is said in the main Chambers of both Houses, as well as proceedings in Westminster Hall, Public Bill Committees and other general committees. Hansard takes its name from Luke Hansard (1752-1828), the head of a family of parliamentary printers.

“…Famous writers worked as parliamentary reporters, including Dr. Johnson, Coleridge and Dickens, but it was not until 1944 that a woman joined the Hansard reporting staff …”

Heading to Parliament to work with words

In 1997, I spotted an ad for Hansard transcribers in the paper. After passing a short test on grammar, I was invited to Parliament to do additional tests: more grammar, general knowledge and listening to a recording of five minutes of debate, which I transcribed as best I could. I really enjoyed all of this, and was thrilled to be asked back for an interview. Since then I have progressed from transcriber (working on debates in Committee) to House reporter (working on debates in the main Chamber) to sub-editor (Committee, main Chamber and Westminster Hall, which is a secondary debating Chamber.)

I didn’t know a great deal about politics when I arrived, but I had visited Parliament as a sixth former, and saw the green and gold spines of Commons Hansard on the bookshelves lining the lobby where MPs go to vote. The image stayed with me—my degree is in English, and I wanted to work with words—and triggered a response when I saw that ad in the paper.

No two days are the same at Hansard. My core role is in Committee, working on debates on Bills and other legislation, but also evidence hearings in Select Committees such as the Public Accounts Committee, which looks at the taxpayer’s pound and value for money. If I’m working on a Bill Committee, it’s a 9.25 am start, and probably a late finish – all copy has to be read and edited for overnight printing, so I could still be working at 9pm or 10pm.

Producing Hansard is a bit like a play in reverse: we turn words spoken by MPs in Parliament into text. As a sub, I go into Committee to watch what happens. I keep a log that is used by Hansard reporters as a guide to the digital recording – for example, to identify who is speaking. I check and collate the copy they produce and dispatch it for online publication. All of this is done to incredibly tight deadlines: most debates that Hansard reports are available to read on the web within a few hours.

When the House is not in session, I work on other projects. I am in charge of Hansard’s publications portfolio, leading a writing team that produces copy for parliamentary publications, such as the Palace of Westminster guidebook. This is a very rewarding part of my job, and it’s great to see people finding new ways to develop the writing and research skills that they deploy when reporting what MPs say.

For a long time, MPs did not allow their debates to be reported: people who tried to do so were fined and even imprisoned. That began to change in the 1740s, and newspapers could report what was being debated in the House of Commons. Luke Hansard had established himself as a printer of official papers to the House of Commons and in 1812 his son, Thomas Curson Hansard (1776-1833), began publishing Hansard’s Parliamentary Debates.

Famous writers worked as parliamentary reporters, including Dr. Johnson, Coleridge and Dickens, but it was not until 1944 that a woman joined the Hansard reporting staff and only because wartime labour shortages meant that the editor of Hansard was “unable to find a man for the job”. Jean Winder was paid less than her male counterparts, but was backed by the parliamentary authorities and MP Irene Ward in her fight for equal pay, which she eventually won in 1954.

Today, the gender ratio is about 50:50, and the first female editor of Commons Hansard, Lorraine Sutherland, was appointed in 2005.

Luke Hansard said he was “ready for anything” and unpredictability keeps Hansarders on their toes. When I’m reporting Prime Minister’s Questions, for example, the Chamber is packed to the gunwhales, making it hard to spot “sedentaries” – MPs who do not have the floor but make a comment that provokes a response from the person who is speaking. That is why there are always two Hansard reporters in the Chamber: one to keep a note of who is speaking and what they are discussing, and the other to act as back-up and provide an extra pair of eyes and ears.

If something isn’t clear on the digital recording, I can check the video. That can help to identify who an MP is speaking about if they make a vague reference to “an hon. Member.” We also ask MPs to send their speaking notes, which are of particular help if they are discussing something technical like financial regulations. Finally, MPs can read their speeches before publication, and agree any necessary corrections with editorial staff.

In an average month, the output of Commons Hansard contains twice as many words as War and Peace, so there is a concerted effort to make online content as accessible and searchable as possible and enable people to share content on social media. Hansard launched a new device-responsive website last year, and 40% of users access it on their mobile, with readers from more than 100 different countries. We are also working on bringing text and video content – all coverage of what is happening – closer together

In 2017, we will begin a project to complete the digitisation of the historic Hansard archive, which includes records of debates going back to 1803. Making such a vast amount of material easily available online is an exciting development, and an extension of Hansard’s core purpose of reporting debates in Parliament so that they are freely available for everyone to read.

When I began working for Hansard, some reporters were still using typewriters. It was before Google, so if we needed to check something we would look it up in a reference book. The speed and scope of technological change can be daunting, but it has helped us to do our job more quickly and effectively, and attuned Hansard more closely to the needs of its readership.

My advice for girls and women who are interested in a career in politics and government is to think about how you can put yourself in a better position to go for the job you want. Inform yourself, take an interest, learn about the careers on offer and develop the skills they require: good knowledge of current affairs; strong communication skills; how to be organised; commitment and team-working.

It doesn’t always come across on the news, but there are a lot of committed people who work hard to try to make a difference, so pursue your interests and beliefs and offer your energy and enthusiasm.

Politics and government require patience, compromise and collaboration. Women often have a consensual and practical approach to life, which is a valuable commodity in trying to realise ideas and bring about change. The UK Youth Parliament, which holds an annual debate in the House of Commons Chamber to debate the top issues affecting young people, is a good way to learn about campaigning and getting involved in issues you care about.

Work experience is a great way to find out more about working in Parliament, and Hansard offers its own scheme. If you’re interested, write to Jonathan Hoare, Learning and Development Manager, Hansard, The House of Commons, London SW1A 0AA, or send an email to hoarejd@parliament.uk. Telephone 0207 219 6846.

Next for me and Hansard

The Hansard writing team has begun work on a project for Vote 100, which celebrates the centenary of the Representation of the People Act. We are collating statistical data on women MPs—455 since 1918, which is equal to the number of male MPs in Parliament today—and producing biographical snapshots of all of them. This is the first time that such data has been systematically collected, and the project will enable researchers to build a more accurate picture of women in Parliament and their achievements.

As for the core job, Hansard is recruiting for a new training course, which is scheduled to begin in the spring.