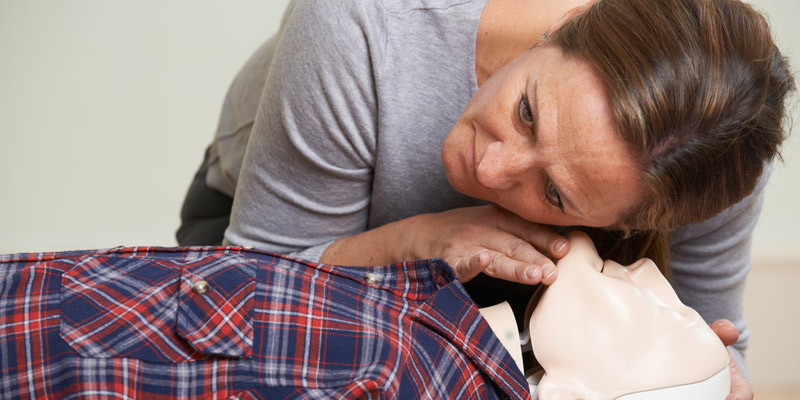 “…I think best part about my job is seeing the buzz that the young people get once they understand and can demonstrate the first aid technique is incredible. It’s that lightbulb moment. “I get it now. I get how to do it and I get why it’s important…”

I came to work for St John Ambulance in 2007 when I made the decision to start working for a charity again. I’d worked for a local authority for a number of years and I wanted to join a charity that makes a real difference in the heart of the community where I’d be able to see the impact of the work I was doing on a day to day basis.

I’ve worked with young people since 2001, so I’ve made the transition from Professional Youth Worker to Youth Work Manager and now to Social Inclusion Manager, so managing a team and a budget for national projects.

As the nation’s leading first aid charity we believe that no one should suffer due to lack of trained first aiders, so we’re here to be the difference between a life lost and a life saved. We operate in many different ways.

We’ve got over 40,000 volunteers, and they provide first aid at events and in communities across the country. There isn’t a ‘typical’ volunteer, but I suppose the one common thing that binds all the volunteers together is that they’ve got the desire to care for others and work towards that mission and vision that no-one should suffer due to a lack of trained first aiders.

I’ve never worked anywhere else where that is embedded in every single person you meet, from our amazing volunteers, to staff in all our offices up and down the country and our head office. It’s embedded in everything everybody does and I think that’s wonderful.

Increasing the numbers of people from socially excluded groups getting involved

In my role I’m instrumental in taking forward the charity’s plan to increase the number of people from socially excluded groups getting involved in St John Ambulance and giving them the necessary first aid training.

So my role includes working with different groups of people that the World Health Organization has prioritised as most in need of first aid training or as more likely to use their first aid skills, so that includes people like young carers, young people in remote and rural areas, those in areas of high deprivation, vulnerable people and older people.

My role is specifically targeting those groups – so going out and talking to the people in those groups and those communities and saying: “Do you have first aid training? If you don’t, why not?” and then taking it back to the organisation and saying, “These are the reasons why they’re not first aid trained. These are the reasons why they’re not engaged with us. What can we do? How can we reflect on our practices and our offer to ensure they can engage with us and they can get that training?”

In the past we’ve noticed that sometimes it’s the way we word things as an organisation. That’s something really simple where if we’re aware of it, we can change, and it really opens the door for people to come and get involved.

The projects I manage

I manage a number of projects up and down the country. We’ve got projects that work with young people and we’ve got our first aid training for informal carers [people who voluntarily look after a relative or friend in need of care].

We’ve also got our Stick It package, which teaches NEETs (those not in employment, education or training) how to treat an injury caused by a weapon. Young people are really instrumental in putting that together and saying, “This is what we think the package should look like and this is how we think it should be delivered.” They then go back out into their community and deliver the package that they’ve effectively created.

So the recipient of the training is being trained by another young person, which for them is so powerful, because they’re looking and saying, “You could be in my peer group and you’ve got the skills to stand up in front of all of us. I want to do this. I want to get involved.” So we’re providing them with first aid skills but also with that motivation to say, “I can do this. This is within my reach.”

It makes such a difference. I go out and I’m not ancient (I’m in my thirties!) but having a 15 or 16 year-old come out and train with me makes such a difference. You can see the difference in the dynamics, and it’s such a buzz to see that young person that’s come to you and said, “This is what the package should look like,” and then to see the buzz that they get training it. It’s incredible.

The warm, fuzzy feeling that reminds you why you do your job

I think best part about my job is seeing the buzz that the young people get once they understand and can demonstrate the first aid technique is incredible. It’s that lightbulb moment. “I get it now. I get how to do it and I get why it’s important.” You just see that moment for them and that is what gives you that warm, fuzzy feeling that reminds you, “Actually this is why I do my job. This is why it’s important to keep pushing and to keep ploughing forward with the work that we’re doing.”

It’s also hearing stories where people have used their first aid. We had a young man in the East Midlands who did one of our young parents’ packages, and a couple of weeks later his baby was choking and he knew what to do, so he effectively saved his baby’s life. He then came in the following week and couldn’t thank the development officers enough, and brought his son in to meet the guys to share his experience.

When you hear things like that it’s like, “Wow! That could have had a totally different outcome.” So it’s amazing to see in practice, and the number of young people who share their skills and share their knowledge with their friends is so important.

The importance of first aid for parents

I’m not sure if you saw our campaign last year about The Chokeables, which featured a lot of celebrity voices and it showed parents a memorable and effective way to help a choking baby. It’s been credited with saving 45 babies.

As an organisation we want parents to feel confident that they can help their child in any minor or major emergency, so as an organisation we’ve designed some baby and child specific free first aid videos, which are available on our website, and they cover things like choking, CPR, the recovery position and how to deal with cuts and bruises.

How Womanthology readers can get involved and learn lifesaving skills

There’s many different volunteering roles at St John Ambulance. The best way for them to get involved would be for them to visit www.sja.org.uk/volunteering and have a look at what volunteering opportunities are available out there. If they don’t have the time to volunteer they can learn some basic lifesaving skills by either doing a course or downloading the St John Ambulance first aid app. Or they can even go to our website and have a look at the wide range of videos we’ve got on there as well.

Coming up next for St John Ambulance

There’s loads coming up. One of the top things is that we’re launching a new campaign over the next couple of weeks, so people can look out for that in the media. As a department, one of the big things for us is that we’re setting up a partnership with The Lullaby Trust to create a package for young parents to train them in first aid.

We’re also developing a package around substance misuse as a lot of young people have said to us that their friends or people they know, or family members may face substance misuse issues, so we’re working with organisations like the Amy Winehouse Foundation and Addaction to develop a package for young people.

We’re also going to be developing a first aid training for young carers package too. There’s a lot of young carers in England and it’s such a responsible role for someone at such a young age, so first aid skills are definitely something I think they should have.

There are relevant and bespoke packages for specific groups, so we’re going to be doing a lot of research with those groups and the organisations that support them to find out what that package will look like. So we’ll design it, pilot it, get their feedback and start rolling that out this year and I can’t wait!