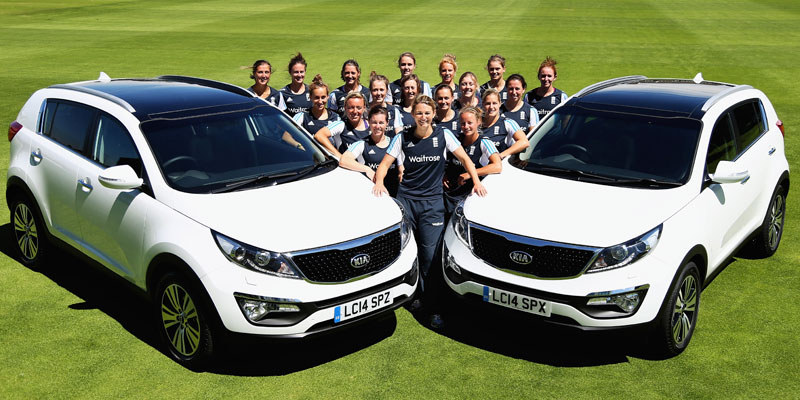 Maaike De Vries is Events & Sponsorship Manager at Kia where she is responsible for the brand’s two-year sponsorship deal to be the official car of England women’s cricket, announced in July 2014. The historic deal represented the first ever standalone commercial arrangement for the England women’s team.

“…It is this level of exposure and support from sponsors that will ensure the acceleration of women’s cricket and inspire the next generation of England women’s cricketers, but what is also important to the brand is that by showing commitment to women’s sport Kia is not just about the traditional sales. We are looking to contribute to a wider sporting community and to challenge stereotypes…”

Please can you tell us a bit about your career to date, how you ended up in your current role and what made you want to join Kia?

I have worked in a variety of companies in a number of different areas – but generally involved with the motor industry, but organising, communication and people have always been a passion of mine and my whole career has been focused around these skills.

Kia offered me the chance to combine all of those passions and in the early days it was a small company so there was the opportunity to try everything and be involved in everything. I am more focused now, but as the brand has grown from being a value brand via a “challenger” position to its place now as a mainstream volume manufacturer there is an even wider range of events to be creating, implementing and coordinating.

Why are women a key target group for Kia?

The motor industry in general has changed over the past few years and so have our customers. Men may be more influenced by a particular brand but women are just as interested in features, refinements and technology as men when they are purchasing a car.

Research has shown that women have the deciding say in 80% of car purchases, and naturally, that makes women very important for this sector.

How are the demands of the female consumer influencing the development of new models and the way the dealer network operates?

It would be wrong to say that we develop cars specifically designed for women. However, as part of Kia’s model development research, before each car gets launched, diverse market analysis is undertaken and women play a very significant feedback role in this.

Kia was the first car brand to link up with Reevoo – an external unbiased reviews company who surveys all our buyers for genuine feedback.

As an example, the feedback from our female buyers of the Kia Sportage, our compact SUV, is that women like this car because it delivers for them both on aesthetic and practical levels. The exterior appeals but the car also offers plenty space and convenience gives a commanding driving position and is comfortable to drive.

Increasingly designers and engineers look to ensure that all of our products meet the varying demands of all customer types – singles, families, young and old and that means they have to work for both genders.

Please can you tell us about Kia’s sports sponsorship strategy?

In the UK, Kia has been involved with cricket since 2007 when we started sponsoring the grounds of Surrey’s Cricket club, now called the Kia Oval.

As this proved to be a very effective sponsorship over the past few years, we wanted to look at how we could extend this and decided to follow a less obvious route and do something a little bit different, to follow a path that had not yet been tried and tested.

When meeting with the ECB [the England and Wales Cricket Board] it became very clear that a professional sponsorship would make a big difference to routine of the women’s team. Kia believes that women’s sport is key and we are proud to have been involved with the England women’s cricket team as such an early stage.

Historically, women’s sport has suffered from lack of funding and underinvestment. What made Kia want to change this?

The partnership with the ECB and the investment into the women’s cricket team is clearly a pioneering development for women’s sport and sponsorship.

We expect that this investment will serve as a ‘proof of concept’ of the commercial credibility and viability of the women’s game, internally at ECB, among the game’s stakeholders and, most importantly, in the wider sponsorship industry. Kia is just proud to be one of the first.

How has this additional investment enabled the game to develop and what has the response been like from the players?

Investment into women’s cricket has supported the players’ newfound professional status, serving to further enhance their profile and the sport altogether.

The partnership with Kia involves more than just financial support. On a practical level, the team collectively drive over 300,000 miles every year. Each member of the women’s cricket team has been given a Kia Sportage, which has made getting together in Loughborough as a team in for training sessions much easier.

The players do not stop telling me that they love their Kia Sportages!

Since the Kia announcement, in-bound interest in sponsoring England women and grassroots women’s cricket initiatives has grown significantly. It is a win/ win situation for both ourselves and team.

What recognition has this brought for the brand?

The Kia sponsorship announcement in 2014 generated a significant volume of national and international media coverage across national sports media, industry and sponsorship press.

The coverage has continued both online and in print and culminated in TV coverage on Sky during the current women’s Ashes. The level of broadcast coverage that the England women’s team now gets through partnerships with Sky Sports and BBC Radio continues to lead the way within international women’s team sport.

It is this level of exposure and support from sponsors that will ensure the acceleration of women’s cricket and inspire the next generation of England women’s cricketers, but what is also important to the brand is that by showing commitment to women’s sport Kia is not just about the traditional sales. We are looking to contribute to a wider sporting community and to challenge stereotypes.

Are there any of your future plans that you’re able to share?

We are constantly looking to the future to ensure the sponsorship delivers both for Kia and for the team. Kia likes to be involved in those opportunities that suit the brand and where we can make a genuine difference.

I can’t disclose any future plans as yet, but we at Kia are certainly hoping to continue a fruitful relationship with women’s sport as part of our sponsorship plans.