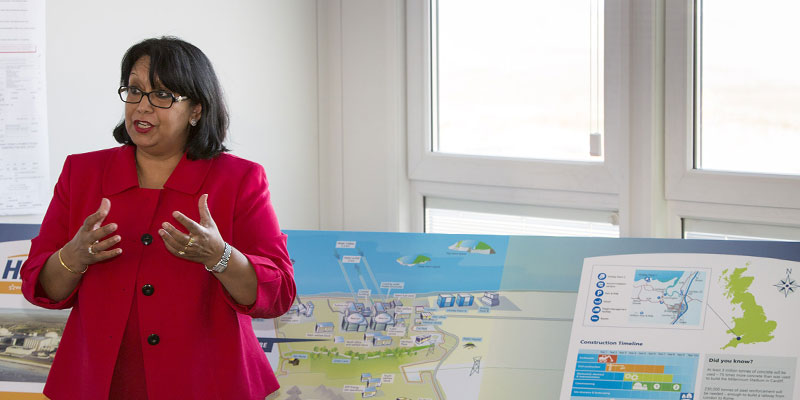 Baroness Verma was appointed Parliamentary Under Secretary of State for the Department of Energy & Climate Change in September 2012. She is a Conservative member of the House of Lords and in 2006 she was raised to the peerage as Baroness Verma of Leicester in the County of Leicestershire. Prior to becoming Parliamentary Under Secretary of State for DECC, Baroness Verma was Spokesperson for Cabinet Office, International Development, Women and Equalities and Business Innovation and Skills.

“…we need companies across the energy sector to take individual ownership and place diversity firmly at the heart of recruitment, retention and progression. It is important that we are able to embrace the challenges and opportunities presented by our future low carbon energy mix with a truly representative workforce…”

Shouting about British expertise and opportunities on a world stage

This week’s nuclear industry showcase in London is one of those occasions when we can really shout about British expertise and opportunities on the world stage. As a pioneer in nuclear energy, our highly capable and competitive industry is recognised as one of the global leaders.

An extensive array of expertise and technology

The job opportunities aren’t just in new nuclear. In decommissioning, our companies will provide a significant contribution to overseas civil nuclear programmes, after spending years building up an extensive array of specialist expertise and technology.

By 2030, the International Atomic Energy Authority estimates that 145 reactors will have been decommissioned at a cost of £250bn: the total liability for reactors, fuel cycle facilities and research activities over the next 50 years is estimated at approximately $1 trillion. I want to see the UK take advantage of this and for our nuclear industry to become a true global leader.

To support this vision DECC, BIS and others have provided more than £100 million for nuclear innovation since 2012. We are ensuring that UK businesses benefit from the estimated 29,000 to 41,000 new jobs and deliver substantial economic benefit to our economy.

Striving for genuine gender balance in the UK’s nuclear industry

I am especially interested in ensuring that career opportunities are open to everyone and that we strive for a genuine gender balance in the UK’s nuclear industry. There are various initiatives with industry and government representation making headway on this issue – including POWERful Women, which I co-founded last June, and Women in Nuclear.

Yet we need companies across the energy sector to take individual ownership and place diversity firmly at the heart of recruitment, retention and progression. It is important that we are able to embrace the challenges and opportunities presented by our future low carbon energy mix with a truly representative workforce.

Speaking about the launch of a new report by PwC and POWERful Women – Igniting Change: building the pipeline of female leaders in energy, Baroness Verma added:

This report comes at an important moment for the country’s energy sector. As we transform the way we generate and use energy, we must also transform the disparity of representation of women at the top table. A more diverse pool of talent will be crucial to maintaining the UK’s position in the global market and addressing a loss of consumer trust in the sector.

And Igniting Change clearly shows that everyone has a role to play – from CEOs and senior management to HR departments and individuals themselves. Together, my hope is that we’ll be able to reach POWERFUL Women’s ambition of ensuring that 30% of executive energy company board members and 40% of energy company middle management are female by 2030, at latest.

Watch an interview with Baroness Verma

Join in the conversation about energy and gender: