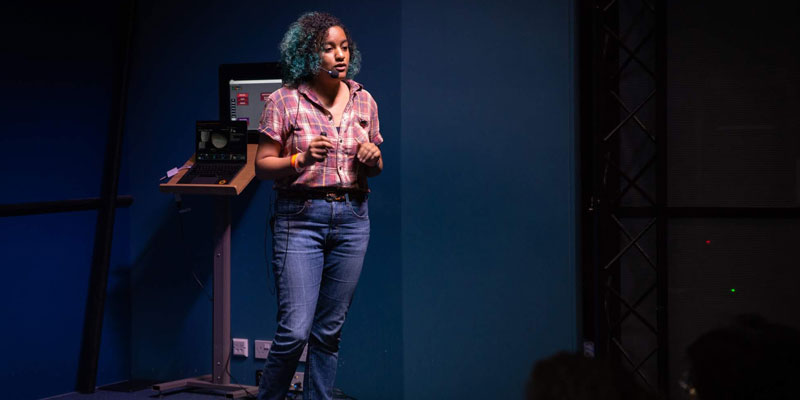 Naomi Rowe-Gurney is a PhD student at the University of Leicester studying ice giant atmospheres, returning to study after pursuing physics and astrophysics via an integrated master’s programme and then taking a five-year break from education to teach. This includes two years’ experience as a college physics teacher in Shanghai, China. Naomi is a proud champion of inclusion and diversity in STEM.

“Intersectionality is an incredibly complex challenge because society has so many different issues that need to be tackled, and it often seems easier to put people in boxes to be able to tackle those specific issues, but everyone is different and we shouldn’t oversimplify.”

I’ve always loved science, especially physics, so that’s why I chose to study physics with astrophysics at the University of Leicester. I did the integrated master’s programme so I took four years to get an MPhys (master’s degree in physics). I had no idea what to do after university and had a friend heading out to China, so I thought why not?

I ended up loving China and lived in Shanghai for five years. I was mostly a teacher and whilst I was teaching physics, I regained my love for it and decided I wanted to pursue a PhD. And here we are!

Today, my PhD is a perfect combination of two of my favourite areas of science: space and weather! I study the weather on other planets, specifically the ice giants, Uranus and Neptune and their ‘middle’ atmospheres. I use data from the Spitzer Space Telescope to look at how the atmospheres of the two planets change over time.

The furthest away planets in our solar system are Uranus and Neptune. It used to be Pluto, but Pluto was ‘demoted’ and Neptune is now the furthest away. We call them the ice giants because they have what we call ‘ices’ in their atmospheres and deeper down as well. Basically, an ‘ice’ is just something that’s heavier than hydrogen and helium. There is some water ice in there as well, but it’s not just water.

On a day-to-day basis I mostly do experiments on a supercomputer. I use it to simulate the atmosphere using the data from the Spitzer Infrared Spectrometer (IRS). Other than that, I write and read a lot! (I am currently writing my thesis so there’s a lot of tea and procrastination involved!)

I use the spectra we get from the IRS, which is just lines of information that tell us how bright something is, and you split it apart like a rainbow, and then you look at how much light there is in each colour. Then that tells you what it’s made of and what temperature it is. That’s how we look at the atmosphere from a distance. It’s called remote sensing and we do the same thing to look at the weather on Earth except using satellites that are pointed at us.

Before COVID-19 I used to work at the university in an office with my amazing office mates, who were also great pub mates. Now I work from home. My ability to do my work isn’t affected much beyond motivational issues but my social life is in the ditch as I’m sure is the same for most. I look forward to returning to something more normal soon.

The importance of taking an intersectional approach to diversity and inclusion

I understand that people can be in lots of different boxes. For example, I am a gay Black woman. Intersectionality is an incredibly complex challenge because society has so many different issues that need to be tackled, and it often seems easier to put people in boxes to be able to tackle those specific issues, but everyone is different and we shouldn’t oversimplify.

There aren’t many Black people, especially Black women, in science, so we’re missing out on entire cultures worth of ideas, and that can’t be a good thing. If science mostly has middle-aged white men doing research, as has been the case throughout history, there is a tendency to observe things in a certain way, but this is a massive shame because diversity of thought means more ideas, and therefore better ideas.

My advice to anyone interested in a career in the space sector is to not let anyone discourage you from following your interest. I was told so many times that maybe physics wasn’t for me and thank goodness I didn’t listen!

Revolutionising how we see the universe

I can’t tell you what I have coming up as it’s not set in stone yet but it is VERY exciting! I can hint it has to do with the new James Webb Space Telescope launching in October this year though. This telescope is going to revolutionise how we see the entire universe and when it’s pointed at Uranus and Neptune especially it will answer so many questions we still have about the planets. Keep an eye out for news about the Webb later this year! Keep up-to-date on my Twitter.