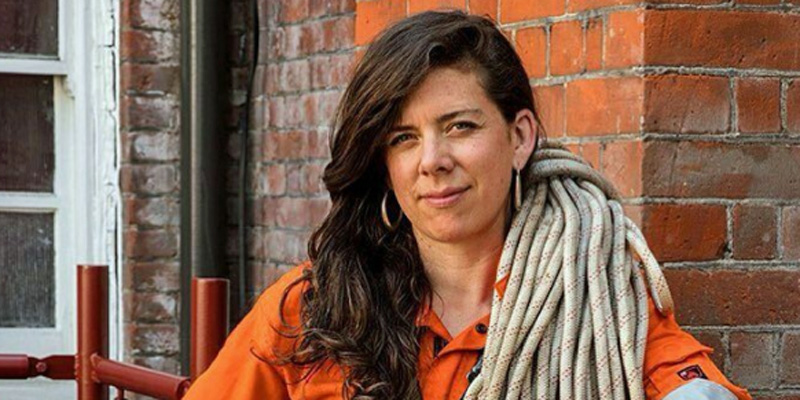 Jen Kelly is an industrial abseiler who has worked around the world in the construction and energy sectors over the last decade. She is founder of Women in Trades Network Ireland, which she set up to represent the women who make up less than 1% of the workforce of construction sites in Ireland and to raise awareness of career options for women in the trades. Jen attended the Women in Trades event in Chicago, where she represented Ireland.

“…Right now, I am in Chicago at an event at the Women Build Nations Conference. It is the biggest gathering of tradeswomen in the world and this year it drew people from all over the United States as well as Canada, India, Nigeria, and (of course!) Ireland…”

Working in construction was not something I ever imagined myself doing when I was younger but perhaps that’s not such a surprise. After all, very few women are encouraged by their school, family or peers to go into work in manual trades. And although its 2017, there is still a global tendency to expect women and men to fill certain roles, and the media has yet to prove otherwise. 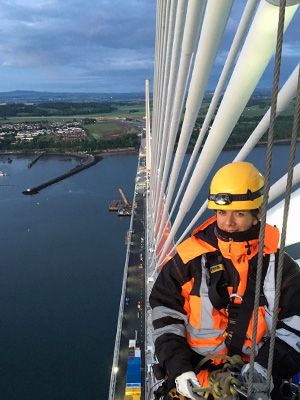 I started working as an industrial abseiler in construction in Australia because I had friends who were doing it. Between their stories of adventurous and interesting days at work and the pay packet that would come with it I was sold.

I moved around a lot for this job. I got to work on wind turbines in Scandinavia near the Arctic Circle and on oil rigs in the Indian Ocean, city skyscrapers in London, Melbourne and so on.

I moved back to Ireland where my family were living a couple of years back and at that time was looking for other types of work that I might do in construction. I noticed there were even less women working on site than in any other place I had worked, and no support network out there for women who worked on the tools.

So, once I got tired of hearing myself whinge about it, I decided to set up WITNI – Women in Trades Network Ireland. In the first instance I wanted to change the visual language of the construction and manual trades landscape. And what I mean by this is that I wanted women to see other women out there in masterful strong roles as workers of the industry.

After hunting around I found women who worked in a variety of trades and they agreed to write down the stories of their lives so that other women could know a bit more about what it meant to work in that profession. We added beautiful photos of them in their work environments as a response to the notion that “if you can’t be it, you can’t see it”.

Women carried by their positive attitude and passion for their craft

In essence, it’s a team effort to create role models, to inspire one another and you can read about some of the women in the ‘Career Stories’ section on the WITNI website. These women are incredible individuals. Many of them have been the only women among a group of men in their working lives, and their positive attitude and passion for their craft carries them through.

Even if you can handle being the only women in the room, it’s important to feel supported by your peers and it’s nourishing to relate to other women, so WITNI also functions as a social and support network, that we can get advice or help from one another. We answer calls from other women who are considering stepping onto a similar path and we are an open channel for being able to pass news around about training, jobs and industry issues.

Looking to the accomplishments of women in the industry overseas

Ireland itself is slow to increase its female participation in the industry. Less than 1% of the workers on site are women but we know that women really love to learn tool skills. So, I started looking at what’s being accomplished by women in the industry overseas.

Right now, I am in Chicago at an event at the Women Build Nations Conference. It is the biggest gathering of tradeswomen in the world and this year it drew people from all over the United States as well as Canada, India, Nigeria, and (of course!) Ireland. When I tell you that 1600 tradeswomen came, I mean they booked out the entire Hyatt Regency Hotel at McCormack Place!

The event runs for four days. It’s an incredible combination of stocktaking of all that we have accomplished as women in the industry. It involves workshops on all the personal, practical and political aspects of working in the industry. There are talks, workshops and tours. There is focus on how minority groups are treated within the industry and how best we can support each other.

Can you imagine seeing a labourer, bricklayer, glazier, electrician and plumber sitting in a row? Now did you imagine they could look like this?

It’s a profound experience. In fact I feel that, even if with no connection to the construction industry you would leave inspired. Clarity, focus and strength resound from the women that stand up to speak.

It’s not only important to meet together in this way for the feel-good factor. These effective women have changed policy on a national level. The Iron Worker Women of America have collectively engineered what is the first maternity policy of its kind within the building industry. 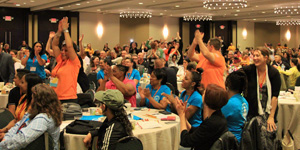 Because of the nature of their work, they have reached an agreement whereby they are being financially supported to take approximately six months’ maternity leave prior to childbirth and six to eight weeks following childbirth. They could prove that it made more financial sense to create this arrangement, that retains the woman in her job, than the industry paying for a new apprentice starting from scratch.

Changes like the Iron Worker policy have happened quickly in the last couple of years but women in trades in America have been knocking on doors for improvements in industry for 40 years or so. 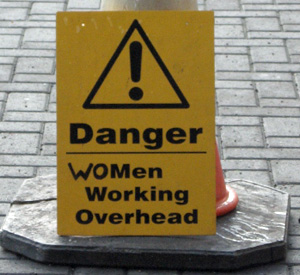 Co-ordinated tradeswomen’s events are becoming more common. In London this year the female plumbing company Stopcocks, held their first Women Installers Together conference, for plumbers and gas installers. In March of next year, the Tradeswomen Australia Conference will be held.

The reality is that women around the world love working these jobs and all these events are testament to that.

Back home, WITNI is currently seeking funding to start up programmes that we would like to run to bridge the gap between women and skilled trades. I am optimistic that we can make this happen. It will take the investment and input of other people in society but as Juliana Stratton quoted this weekend; 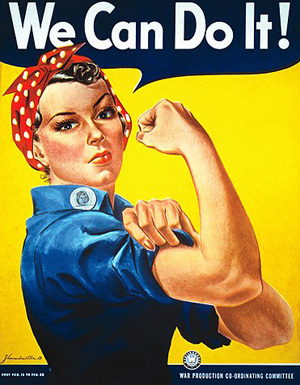 “We Can Do It!” image credit: By J. Howard Miller (1918–2004), artist employed by Westinghouse, poster used by the War Production Co-ordinating Committee [Public domain], via Wikimedia Commons