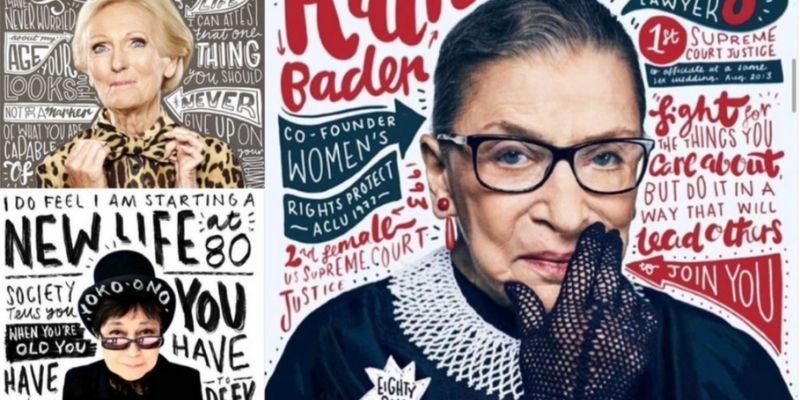 Tash Willcocks is a co-organiser of Design Education, head of learning design at a multidisciplinary design studio, Snook, as well as working in freelance illustration/facilitation for clients like Siemens, IKEA, and Meitu. Before this, she was director of Master’s courses in Europe at a global learning provider, Hyper Island, where she worked for seven years. She also has a background as programme leader of Master’s degree programmes in Graphic Design and Communication Design at the University of Salford.

“#AceAtAnyAge is a series of images way of showing off women over the age of 50, making them visible. It started as a few drawings, but now it has grown into over 100. It goes back to “you cannot be what you can’t see”. I hope this helps people realise we are not on the shelf… because there is no shelf! We’re not living in a Jane Austin novel or in the 17th century.”

Discovering human-centred design and unlocking the power of the team

I passed my Master’s in Communication Design at around 22 at Manchester Metropolitan University, landing in Manchester, which became my home. Its strong creative community really helped shape my path.

I will be honest: I fell into education through doing some demonstrating, mainly Adobe Illustrator and Photoshop.

I realised the students responded better when the projects were not merely academic and started bringing in live briefs, although I did not realise it at the time it sparked the ire of ‘learning by doing’ methodology for me.

Initially, I was working in parallel, running a venue called Night & Day in tandem to teach to pay off my student debts. I think that’s where I developed a talent and taste for always juggling two things at once, which has flowed through the rest of my career up till now. Working in venues with amazing creative folks and a whole host of drunk ones is probably the best starter education for looking at human behaviours I could have had.

As I moved through working in academia, I went from lecturer to head of the department at the University of Salford and, after a while, I stepped over to Hyper Island, a creative business school. It sparked new interests and I learned a lot along with my students about human-centred design and the power of teams. It also completely opened my eyes to a new way of working, facilitating, rather than teaching, realising the smartest person in the room is the room, everyone brings so much, and the Hyper Island students are inspirational.

A great quote by James E. Zull comes to mind: “The learners’ dependency on teachers is an enemy of learning.” We are all learning, it’s not a static experience, it’s all around you, it’s about being open and absorbing all the possibilities. 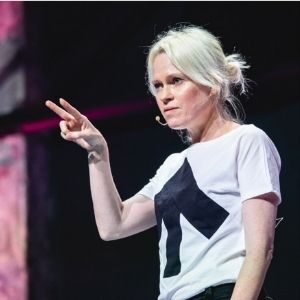 Hyper Island opened up a lot of opportunities for me, and mixed with an ongoing drawing a day project, seven years and still running I have ended up talking all over the world about these areas. From diversity in teams as part of Oktoberfest in Munich, HCD in San Francisco, ethics in design in Tallinn, and TedX on my doorstep, in Manchester.

I am very much driven by learning and design, so the next step was working at the amazing Snook, a multidisciplinary design studio that creates products, services and tools that help everyone from individuals to governments thrive. I am excited to create something new with them as head of learning design.

At Hyper Island, I worked with Jenny Theolin, a force of nature who loves creating communities, such as Toolbox, a collaborative resource kit. 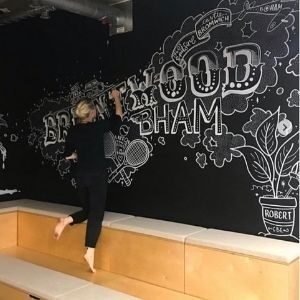 Therefore, I decided to join forces with her and create Design Education, which is still in its fledgeling steps at the moment, but has the potential to create a live and powerful movement.

It’s basically a platform for all formal and informal teachers within the design industry to join a safe space to swap and share knowledge, experiences, research, ideas and insights – our aim is, through healthy conversations and ideation, to improve the conditions for learning design at school, university and at work.

There are some fantastic people out there already doing brilliant things, shifting and disrupting education and the way we learn, so this is a place to create connections and amplify the good practice by sharing.

It’s OK to say NO to digital overload

I have recently closed 15 Slack groups; I was at Slack capacity and the relief I felt simply being in three has been incredible. I am very anti the ‘busy’ movement, even though I am aware I do from outside look busy – and I am, but through choice, I am also embracing saying NO and stopping more often.

On Design Education, there was a super interesting conversation sparked by Nitzan Hermon, from The New School, about how Slack can be where communities come to die. I loved the fact we were having this conversation on Slack, oddly for me, it showed that there were openness and trust to actually air this. 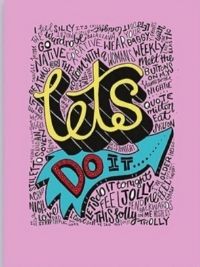 agree to a certain extent: I had my Slack honeymoon period, but I am now much warier of it simply becoming another medium I scroll like a tiny lab rat searching my dopamine hits.

I feel at the moment it’s a place to build, it’s fantastic if used well; I’m not a fan of rules, but I love a tidy Slack house. It’s about using it in a helpful manner rather than a hindering one. Slack has its place, it’s a tool, it’s about learning to master the tool rather than letting it control you.

The Slack community is a starting point and not the final aim for Design Education. As Nitzan says:

“Slack (or Discord etc.) operates on a broadcast mentality, masked behind a promise of transparency. When a space asks and delivers on co-creation, transparency is no longer an issue, and broadcasting becomes a hindrance to tending to the ecology of comminution.”

Diverse design is a better design 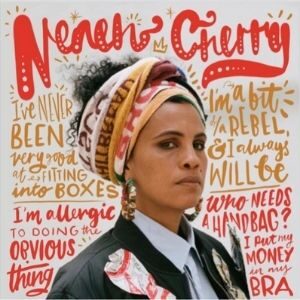 You need people from different backgrounds, ages, genders, ethnicities, but also sexual orientations, introverts, extroverts, cultures… it’s about breaking the homophily, not just in design and digital but in any space where there is a lack of diversity.

In digital and design, we need different ways of thinking of approaching problems so that we see it from numerous angles; so, we see the gaps, mistakes and hopefully stem some of the unintended consequences.

“We tend to surround ourselves with people we identify with, in appearance, beliefs and perspective. This subconscious habit, known as homophily, occurs because it’s validating to have our own ideas reflected back to us by the people around us, whether it’s friends, family or colleagues.”

This may feel good, but surrounding ourselves with mirrors and people like us never leads to good design.

We live in a man’s world

Drilling into women in digital and tech, I want to signpost Invisible Women by Caroline Criado Perez, which is an incredible, if challenging, read. Criado Perez addresses gender blindness in tech culture, and its producing a “one-size-fits-men” approach.

A very brief example is:

“This is a man’s world, we learn, because those who built it didn’t take gender differences into account. Most offices, we learn, are five degrees too cold for women, because the formula to determine their temperature was developed in the 1960s based on the metabolic resting rate of a 40-year-old, 70kg man; women’s metabolisms are slower.

I have noticed a trend of men buying the book for girlfriends, partners, wives, and daughters, which is great, but they should be reading it as well, that would be the greatest gift.

In the domain you choose, feel confident to talk, blog, go into schools, do what you want! Do not wait to be invited, asked to go on stage, put your voice out there, mentor; hold your hand out and bring others with you. “You can’t be what you can’t see.” – wise words of Marie Wilson which shine a light on this issue.

But the problem is not only women not feeling confident of speaking out: there are many women who do not know about the variety of digital opportunities that are available for them, including UX (user experience), coding, 3D modelling etc… because of the language of these job adverts and events.

I had not noticed this before as I suspect I am immune to the words, but I read an interesting article on gender coding in adverts for jobs, which led me to a gender decoder for job ads, which checks the language for you, simple and smart. Give it a try! 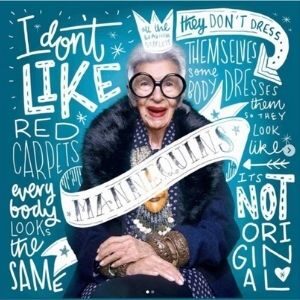 #AceAtAnyAge is a series of images showing off women over the age of 50, making them visible. It started as a few drawings, but now it has grown into over 100. It goes back to “you cannot be what you can’t see”.

I hope this helps people realise we are not on the shelf… because there is no shelf! We’re not living in a Jane Austen novel or in the 17th century. 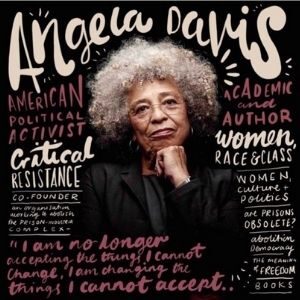 I’d like women under 50 to see ageing, as Joanna Lumley puts it, something to “look forward to, because you will have more miles covered.” She followed with “We mustn’t be led into thinking getting old is bad, growing old is good.”

I started the project after reading that women over the age of 50 feel invisible, that the highest rise in completed suicides was in women aged 50 and over (I have read since it polarises in 45-65). Jane Evans of Uninvisibility does great work in this area.

Next steps for me

I will be ageing loudly, growing, learning, stretching and finding my edges.

I will also be creating some amazing new human-centred design sessions at Snook for designers and non-designers alike to engage with; push Design Education forward with Jenny – definitely and defiantly not being invisible…