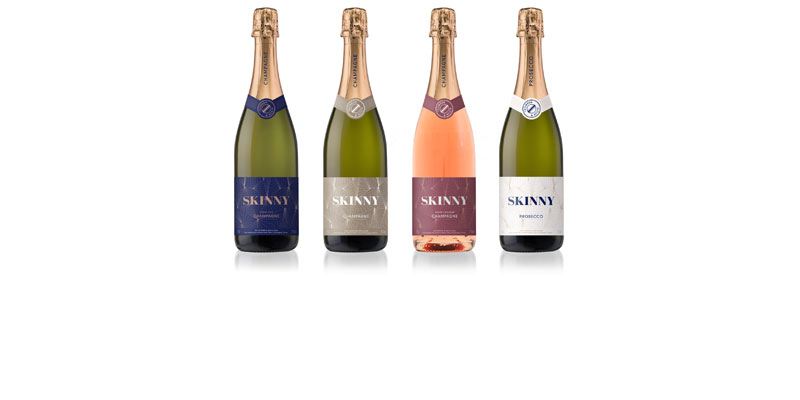 Amanda Thomson is CEO and creator of the Skinny Champagne brand that is about to officially launch in the UK with a full marketing and distribution push. Formerly a BBC broadcaster, Amanda moved to Paris in 2010 to fulfil a life-long ambition to study for a wine and Champagne diploma at Le Cordon Bleu. Amanda has single-handedly launched a No Sugar, Grand Cru “Skinny Champagne” which is stocked in Selfridges, with more new variants to follow.

“…just as you think it’s all going the wrong way and what on earth are you doing, you’re wasting your life and you’ll be out on the street soon, something wonderful will always happen…”

In the next couple of months, we’ll be officially launching Skinny Champagne. I’ve spent the last two years developing the range of no and low sugar sparkling wines, all high quality, under the Skinny Fizz brand.

The more research I did, the more I realised that there’s not a direct comparable for the Skinny Fizz portfolio globally. I am at the point where I am so excited to be getting the branding out because I’d built all the buzz around the concept and the actual Champagne itself, but so much of a drinks range is about the branding, so my philosophy has been, “If it’s done this well and I haven’t even branded it, what’s investment going to do when it’s properly branded, properly launched and we launch the other bottles in the range?”

So, as luck would have it, I managed to work with a design agency that I really wanted to work with and they came on board early. They’re a fantastic company called Imagist. I’d admired their work greatly, so my baby will be launching in its real clothes: very glamorous, very chic, but also very classic.

It’s looking like an incredibly strong, exciting, modern yet classic range. What’s been really interesting for me is doing the research, seeing it in a line up and then picturing it sitting in a bar in its new branding. Selfridges was a huge benchmark for me. Once we got it into The Corner Bar & Restaurant in the London store, it got a wonderful reception when they launched it along with a Skinny Champagne afternoon tea, and it looks great in its classic bottle, and to picture it sitting in Selfridges in a month or two’s time with its new branding is a huge deal for me.

When the money hits the bank

It’s due to happen in spring, everything crossed. We’re ready. The team is building. The journey becomes something completely different. I’ve spoken to entrepreneurs about this, when the money hits the bank and you’ve got this really weighty plan to deliver. Of course then it’s time to throw yourself into it next stage, bringing it to fruition – making it happen. So that will be a whole different journey, but I’m definitely ready for it now, to take it to the next level.

Was I crazy? Was it impossible? Were they right?

I think probably the biggest piece of advice I can give to anybody thinking about starting a business is that initially, everybody told me I was crazy, it was impossible, nobody cared. It’s almost like that, “fake it ‘til you make it,” kind of attitude and if I didn’t dig really deep and stick with my resolve, sometimes I would be so devastated inside or so frustrated, but I would just keep telling myself, “OK, OK. Let’s see. I know what I’m doing.”

Even in the moments where I was questioning myself thinking, “Am I wasting my time? Are they right?” you really do have to develop resolve inside – I don’t know if it’s a character trait you have it naturally or you have to develop it – but you definitely need it to be a successful entrepreneur.

Be dogmatic about your belief in what you’re doing

If you are starting something that is radical, which arguably will then have the biggest payoff, but you are doing something that because it hasn’t been ‘officially’ tried and tested and done, you’ve got huge potential rewards in front of you, you’ve got to be so dogmatic about your belief in what you’re doing.

I think unfortunately – or maybe it sorts the wheat from the chaff perhaps – there are lots of entrepreneurs, and I’d imagine it could easily be a high proportion of women, where that’s the thing that breaks them early, even if they have a fantastic idea. If you do look at stats for women launching their own business, I do wonder if there aren’t some incredible ideas that just don’t get pushed through all the way because the women struggle to dig deep enough into their real confidence (or importantly, fake confidence) to follow it through.

I suppose we all know, we do still live in a world where in a lot of situations it’s easy for men to have the bluster and appear to have that confidence. Lots of women do still feel under confident. It’s quite a leap from doing something and making a little bit of money, which is what I started out doing to test the model, to going, “OK, I want big investment. I want a big team. I want to launch this in the UK and then globally.” It’s an ambitious statement, isn’t it? So you have to really, really either believe in it or at least fake it ‘til you do.

I also think the aiming big thing is interesting because again with women I do think sometimes one isn’t necessarily encouraged to think globally and think really large. In many ways for me, the things I’ll be doing to launch in the UK will be replicable in each different country that we plan to launch in. I think initially the hardest job is getting the initial launch right in whichever country, then focus on looking outwards from there using everything you’ve learnt.

With my sort of business particularly – or if it’s a tech based business, whatever it is – lots of different businesses actually, if you do have a large plan to start with, I think that you will perhaps do certain things slightly differently, but we’re not always encouraged to think that way, unless somebody inspiring comes along and says, “Well have you thought about how that’s going to work around the world?” I’ve made sure to surround myself with smart, talented, empowering people here.

It’s the way life is – everything is global now. The way we look at the world is so different now with long haul travel and I think it’s been useful to look at my launch as being initially in the UK and then definitely globally. It makes sense to do it consecutively. I think again people don’t always have the encouragement and can see that it might appear scary to start with.

There’s this really strange thing that once you’re living the life of an entrepreneur, once you’ve got your baby, your business, the way of the world, the yin and the yang. I’m not religious but I am open minded, spiritual, whatever…

Just as it’s all going wrong, something wonderful will happen

There is this thing where just as you think it’s all going the wrong way and what on earth are you doing, you’re wasting your life and you’ll be out on the street soon, something wonderful will always happen and I really believe that. I talk to lots of people about that. It’s a strange thing and I don’t know how to explain that scientifically, but it does seem to happen.

It’s interesting, because I grew up with no sugar. I didn’t have sugar until I was six because my mother was ahead of her time. She was a health foodie way before it was fashionable, so in terms of the zeitgeist for my launch, it makes sense now it’s top of the UK news agenda and in the global agenda going forward.

Most importantly for me it remains this idea that we all need to have less sugar in our lives. If you’ve got a perfect product that doesn’t need it, then all the better. Have sugar if you must in something where it may be needed. People aren’t going to stop drinking Champagne or beautiful wine, even if we say, “OK, it might not be healthy to have too much of it.” I appreciate that, but people aren’t going to stop drinking it per se – and why should we?

My argument is that some of the good stuff  is absolutely fine. So if you’ve got a perfect range that works without any sugar, or with very little, then as far as I’m concerned there’s no disadvantage.

The one the UK market is going to be biting my hand off to get to is Skinny Prosecco. The Prosecco market’s exploded in the UK over the past year or two, and people are often shocked when I tell them that Prosecco has huge amounts of sugar added. It’s very sweet actually when you think about it. Mine will be very low in sugar, still high quality, no taste compromise and arguably a lot healthier.

Modern vernacular for a different sort of taste

So like the bar call in Starbucks is, “Cappuccino or skinny cappuccino?” my plan is that the new bar call will be, “Champagne or Skinny Champagne?” “Prosecco or Skinny Prosecco?” Somebody asked me the other day if this is targeted squarely at women. Interestingly, women are often early adopters, but actually if you look at the coffee market, lots of men take skinny milk – it’s just become the modern vernacular for a different sort of taste and the way I see it, that’s the plan.

We’re now going out to investors to raise capital. We’d be interested in working with individuals as well as large institutions too, so do get in touch if you’d like to find out more.