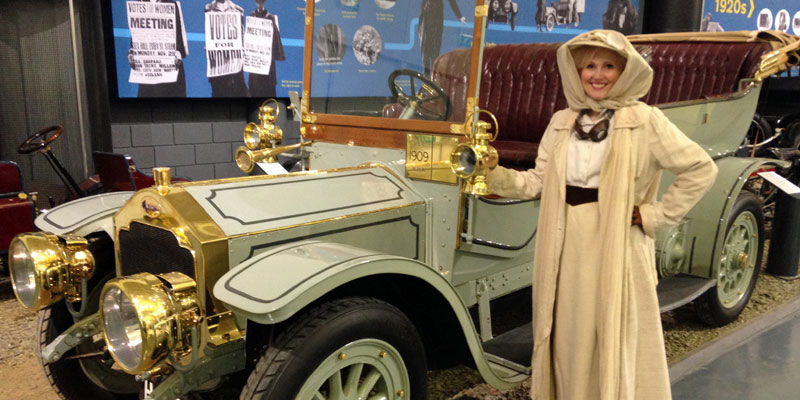 Paula Cornwell is a costumed museum explainer at the British Motor Museum in Gaydon in Warwickshire. Paula dresses up as female historical figures and interacts with visitors to bring the museum’s exhibits to life. The museum has recently rebranded and completed a £1.1 million refurbishment.

“…the Hon. Mrs Victor Bruce … was a racing driver during the 1920s and also gained records in long distance trials and speedboat racing. In 1930 she flew solo around the world in an open cockpit two seater plane…”

Please can you tell us a bit about the British Motor Museum and your role there?

As a Museum Explainer, I work as a costumed interpreter, in first person. I will have several characters that each relate to a different time period and the cars of that time. Presently I am ‘Lady Edwards’, an Edwardian Lady who owns four cars and has a chauffeur. Her latest car is a 1909 Albion A6 and her earliest is an 1899 Wolseley. Visitors are interested in the difference ten years in car design makes, and the fact that each car is driven a different way.

Who is your favourite female automotive pioneer and why?

My favourite is the Hon. Mrs Victor Bruce [Mary Petre Bruce]. She was a racing driver during the 1920s and also gained records in long distance trials and speedboat racing. In 1930 she flew solo around the world in an open cockpit two seater plane. She also gained the unfortunate title of being the first woman in the UK to be fined for speeding. She was incredibly adventurous and often put herself in dangerous situations but always remained positive and pushed through her fears.

What influence did she have on the cars we drive today?

She was able to challenge the idea that only men could complete long distance trials and was the first woman in the UK to take the Coup des Dames at the 1927 Monte Carlo Rally, having driven 72 hours and 20 minutes from John O’Groats to Monte Carlo.

How do visitors to the museum react when you talk about her?

Visitors are amazed at the things that she accomplished and are shocked that they have usually never heard of her when she has achieved so much. She also has a wicked sense of humour and this works well when talking in first person as people find her amusing and amazing.

Please can you tell us about the archives you hold at the museum and why they are so important?

The Archive at the British Motor Museum preserves and provides access to documents, images and film that record the work and achievements of the people who were employed in the British motor industry.

We hold many of the original build records for most British marques and can provide classic car owners with a birth certificates for their car, so the original spec details – there are called “Heritage Certificates” – if you look at our blog – www.britishmotormuseum.co.uk/news/archive-news – you can see more about what sort of information we have and what we do with it.

What is coming up next for you and the museum?

Well we have just completed a £1.1 million refurbishment of the museum, changed the name and rebranded to the British Motor Museum and also just opened our new Collections Centre store containing 250 of our reserve collections that can be seen for the first time by the public! So we have been very busy, now we have an actioned packed programme of school holiday events and weekend motoring shows click here.