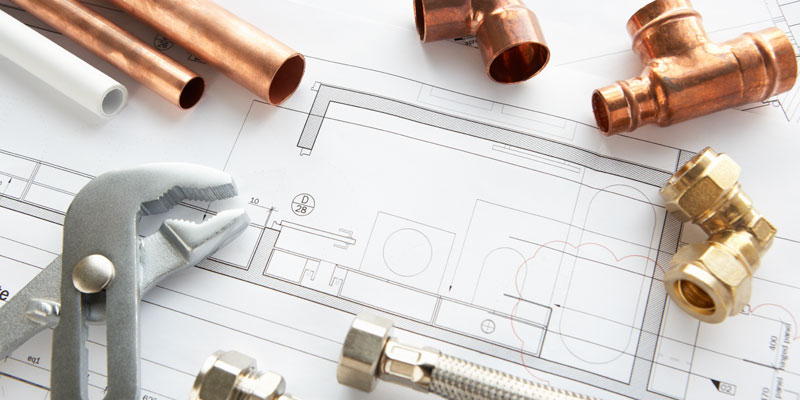 Mica May is a co-director at Stopcocks Women Plumbers and Builders, a national organisation of skilled women plumbers and builders. Established about twenty five years ago by Hattie Hasan, they now have a national network of self-employed plumbers for domestic work and are now also representing self-employed women in any trade with their new ‘Endorsed By’ scheme. In 2013 the company began supporting a community centred around a Children’s Home in Kenya to build a rainwater harvesting system and money raised by their efforts provided bio digesters (toilets that turn human waste into water that can be used for irrigation) and they are heading there for the first time themselves in October to carry out more work. 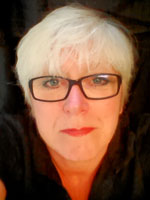 “…there are a lot of men in various parts of the industry who really back and support women in plumbing and other manual trades … But some men don’t get it that with the numbers of tradeswomen so very low, there’s a necessity for a company who promotes women in trades…”

The joy of plumbing!

I got involved with Stopcocks back in 2010 when I helped Hattie, founder of Stopcocks to complete her book The Joy of Plumbing – A guide to living the life you really, really want.

I became really interested and there was far too much to do for one person, so it stretched out from there. Now I am mostly in charge of marketing and PR.

Demand for female plumbers and builders 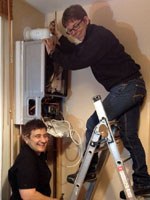 When customers first call us an awful lot of them have a terrible tale of woe about what has happened to them already when they’ve taken on a plumber or builder. They tell us how people don’t turn up, are really rude and don’t respect them, their time or their home and often overcharge as well.

Some of the stories would really make your toes curl; one female customer was actually assaulted by a plumber in her own home, who then had the nerve to send her a huge bill! So they say things like “I wondered what could a plumber be like to give me better service and I thought, a woman wouldn’t behave like that. And then it dawned on me to look for tradeswomen and I found you.” Rightly or wrongly, that’s their perception.

But tradeswomen are so far out of the ‘norm’ that they’re often not a customer’s first thought. That isn’t surprising because according to which trade you’re looking at, tradeswomen are between 2% of all tradeswomen and one in every thousand! So we aren’t always easy to find. That’s one of the reasons we’re launching our ‘Endorsed By’ scheme for all tradeswomen, to make finding them easier for customers.

Once a customer has had a job done by one of our tradeswomen I am very happy to say that they come back every time they need one and they tell all their friends too. That’s why we also want to be able to represent all trades, because customers are asking us for that.

So, there is much more demand than there is supply of tradeswomen. But we also need to make customers aware they have a choice. Once they realise that, they come to us first.

Support from men in plumbing and other manual trades

Some men are great. We’ve been asked to be the UK representatives of Plumbers Without Borders, who before we got involved were all men. And there are a lot of men in various parts of the industry who really back and support women in plumbing and other manual trades.

We do sometimes get hate mail telling us how women can never be plumbers (plumbers do seem to feel this strongest) because they’ll run away at the first sight of a spider and so on – not even that we aren’t strong enough – but silly reasons like we won’t cope with breaking our nails.

But some men don’t get it that with the numbers of tradeswomen so very low, there’s a necessity for a company who promotes women in trades. 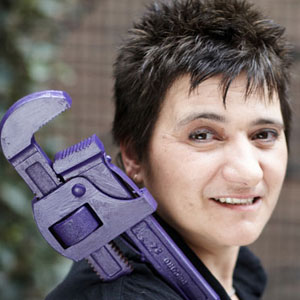 It’s important to explain that we are a small business, even though we have such a big reach.

We don’t get funding or financial support from anywhere. Everything we have, financially and as a business has come from our own work and sweat. We’re not supported by the industry at all, in fact sometimes it feels like we are up against a wall with the industry itself, who seem to not even see any necessity for women to have any support.

Pretty much everyone who works for women, promoting women gets funding support from somewhere because they’re charities, but we don’t because we aren’t a charity.

That is not to complain, we chose to be structured like this, we prefer the freedom it gives us; but in people’s minds, organisations for women are funded organisations, charities. What that means for us is that we have to be able to make everything we do financially viable. If we spend money travelling to a talk we do voluntarily and aren’t paid for it, we’re not earning.

Everything we do that doesn’t bring in money actually uses up our time and resources so that we’re not available to make income – it actually costs us money because we don’t get paid for our time like people with jobs do – but like everyone else we do have bills to pay.

That has to be explained, because people expect us to be in a position to give our time and expertise, to produce information etc. for free. It isn’t expected that men will do that, at least not to the same degree.

Having said that, we feel that the first thing as far as supporting women and girls into the skilled trades is to work with what is. There aren’t lots and lots of girls in schools looking at how to get into the trades. The numbers of young girls wishing to enter the trades is tiny.

Where there are significant numbers is ‘older women’, that is, women over 25 who are therefore too old to benefit from funding for training.

We’re helping this group of women first because they are the largest group and not a group we have to create. We want to help these women become active role models who can then inspire and support more and more younger women – so that the support is sustainable and doesn’t depend on us doing it.

We also feel there is a lot to be done in the careers service, we still hear of girls who do have the strength to ask for help to get into the trades at a young age being told, “You’re too good for that.” We were actually told this by one young woman just over the summer.

We are very keen to contact all construction colleges and offer to support the girls and women who are there. They are still in very small numbers and some find it very isolating to be in college with perhaps one or two girls for every 300 boys.

So we’re looking at ways we can collaborate with other women, with colleges and with construction firms. We ally with people like the Let Toys Be Toys campaign because as long as girls are being told they can’t play with that hammer they are being actively discouraged from going into trades careers. Of course if any firms or even individuals would sponsor any of our work or the information we create and the time we spend just talking to women and girls, it would make it all a lot easier and the process could go more quickly.

There is loads of information on the website, mostly blogs in the Be a Plumber section for anyone who wants to find out more about becoming a plumber and they can just phone if they want to join us. 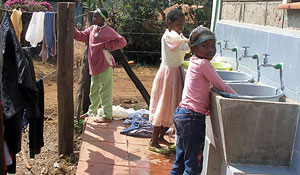 Around the time I was working with Hattie on her book I was also involved in organising an event in Africa, to encourage western women to recognise that African women do have their own solutions and in fact can teach us so, so much. Because of that I met Dr. Karambu Ringera.

When the AIDS crisis hit Kenya she was asked to look after the children of some women who were dying. She found herself in the position of having to set up a children’s home, with no place or money to do it. She was given a piece of barren land and she set about making a loving home for these children.

She found that when she also worked with the HIV positive and other ‘outcast’ women and taught them about raising money from within their own group through micro finance, they were able to set up businesses and become able to contribute to the community, not be perceived as a drain on it.

So, now the children’s home has 36 children living there and some have gone away to college, university and to get jobs. But those amazing young people are now giving back to the community that supported them and the community and children’s home are now 55% self-sustaining, and that is growing all the time.

Karambu asked us to go and work there because it is no different from here, women and girls do not see or imagine they are capable of carrying out building work. So as well as us carrying out plumbing work we will go there as role models. 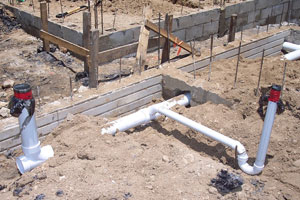 In Kenya they use all plastic pipes, so there aren’t complicated things like soldering to teach, and the sun shines and can be used to heat water. We were so upset when we sent the money for the rainwater harvesting system though, as people there, even plumbers, don’t have what we consider to be very basic knowledge.

So the pipes that carried the water collected don’t go from high to low so that the water runs through them. They travel relatively long distances with no ‘fall’ so the water sits in them and slops out. They leak and drive everyone crazy. There is a lot of very basic science that will really help, like water needs to travel downhill to flow. When so many ‘plumbers’ here don’t understand that of course it isn’t surprising people there don’t know it either. And we can teach this while we fix the rainwater harvesting system.

We will be teaching the women and children and young people. I know there is a young man who is one of the grown up children from the children’s home who really wants to learn this stuff, so of course we will be teaching him too. 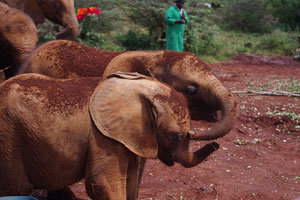 It’s still possible to come with us! We go on 13th October, but anyone who wants to come too can travel out to meet us on 20th Oct and we’re there till 3rd November.

We’re also visiting the Sheldrake elephant orphanage and possibly a giraffe orphanage too, and there is to be an amazing concert in the nature conservancy. Masai warriors will be standing guard to make sure we don’t get eaten by the animals. That’s all very exciting too – you can’t go all the way to Kenya without going and seeing some of the country and animals there.

There’s information about the trip here and here. You can donate here to help us pay for tools and materials. You can also visit our Facebook page for the trip.

We’ve just launched our ‘Endorsed By’ scheme which is a way for any tradeswoman to be endorsed by Stopcocks Women Plumbers. We’ll promote trades women on our website and with blogs so that they can benefit from our great reputation with customers and retain their own brand – read more about that here. It’s how we’re meeting the demands of our customers, gaining more attention for trades women nationally, our brand, of course and supporting skilled tradeswomen across UK.