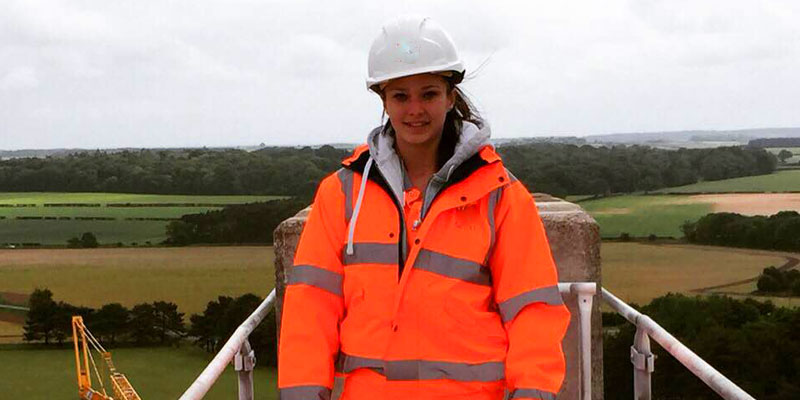 Casey Elsby is a tower crane operator. She trained as an apprentice, working and studying to learn a mixture of theory and practice.

“…The more and more people see that it’s happening and that anyone can do it, the more normal it becomes. I’m 5ft 5. I’m this tiny thing that climbs up a crane. I do get some looks like, “What the hell is she doing?”, but as soon as they see me driving, everyone’s quite happy with me doing it…”

Before I was working as a crane operator I was working on a lorry as a driver’s mate for my Dad’s friend. The lorry had a Hiab on it (a truck mounted crane). I wanted to drive lorries, so I went for my medical. My Dad’s friend moved over to the company I work for now and he recommended I should apply for their apprenticeship scheme. It went from there.

I went for an interview for the opportunity to start an apprenticeship scheme to be a lifting technician, which would include me going to the National Construction College at Bircham Newton to get my tickets for numerous different cranes.

Firstly I had a phone interview, and I got through that so we had a face to face interview and out of 117 I think, only eight people got picked for the apprenticeship – I was lucky enough to be one of them.

Been there and done it myself

So I went to Bircham Newton for three months and I got my tower crane ticket, crawler crane ticket and my slinger signaller / slinger banksman ticket and my cherry picker ticket, my scissor lift ticket and my pedestrian crane ticket. This meant I was getting a good opportunity to see from every point of view on the site. So when I know when I’m in the crane what the slinger and signaller are signalling because I’ve been there and done it myself.

I was at college for three months and got all my qualifications. I got 100% on my theory as a tower crane operator and the two practical tests that involved for the luffing crane and the saddle crane. I was 21 at the time and I was looking it up as I was pretty sure I was the youngest female tower crane operator in the UK.

Feeling of teamwork and accomplishment

The best part is the feeling of the teamwork accomplishment as you watch the build take place.

It’s all a huge learning curve, so you go to college to learn what you need to learn to operate a crane and you’re getting used to the different names of what things are and stuff like that. You get out on site and you’re continually learning every day. It’s a different type of atmosphere because you’re with other workers. It’s great.

When we’re in the yard we have to be up the crane for 7am, so we get there a bit earlier, do our checks, make sure everything’s safe to operate. We have an induction on the cranes because if you’ve not operated that particular crane before you need to be aware of health and safety – they are very health and safety orientated. Then you go up the crane.

No reason women shouldn’t go and do it 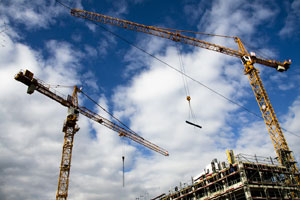 Women and girls who want to get into construction should just go for it. If they’re driven, and they’re passionate about it there is absolutely no reason they shouldn’t go and do it.

Generally people’s reactions are very, very good. Everyone within the company I work for has been brilliant. I haven’t had any trouble whatsoever. Even at college I didn’t have any trouble. I think if you’re confident in what you’re doing the guys are quite happy for you to do it and to be there.

The more and more people see that it’s happening and that anyone can do it, the more normal it becomes. I’m 5ft 5. I’m this tiny thing that climbs up a crane. I do get some looks, like, “What the hell is she doing?”, but as soon as they see me driving everyone’s quite happy with me doing it.

One size doesn’t fit all

Obviously the gear on site caters for men a lot, but where I’ve come in and I’ve said, “I’m 5”5’ tall, I’m a small in this,” they cater and they make sure I get everything I need at the sizes I need. So my hands are tiny and I need small gloves. A lot of the guys have got massive hands but if you tell them you need smaller gloves they’ll go and get them for you. They’re been really good. I’ve been blessed.

I’m not your average crane driver, but I will be just as good as the rest of them.

The future is going to be massive…

I would like to stay working for the company I’m with at the moment, because they’re great and they look after me. I’m hoping to get on to massive sites – some big builds.