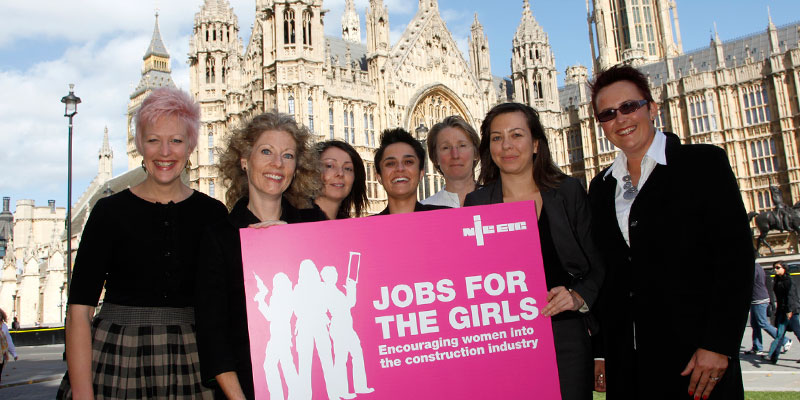 Emma Clancy is the CEO of Certsure which operates NICEIC and ELECSA – the UK’s leading voluntary regulatory body for registered electricians. When faced with the realisation that less than 1% of her 33,000 customers were women, Emma was keen to bring about some change in the industry. She spearheads the campaign Jobs for the Girls – which aims to encourage more women to consider a career as an electrician.

“…At one gala event I was with a male colleague and we were talking to industry colleagues and it was clear the assumption was that my colleague was the boss … well he was the man after all! The conversation went on for some time, until the patronising question was raised, ‘And do you work dear? My colleague was laughing for the rest of the night…”

An industry missing out on what women can bring

Jobs for the Girls was conceived about four years ago when I happened to discover that less than one in every thousand electricians was female. I was shocked to discover the figure was so low and had stayed at that depressing level for many years.

The electrical industry is a fast moving sector and forever embracing change and new technology, but in regard to promoting the opportunities available to women we were lagging behind.

The construction sector in general was experiencing a real skills shortage. If we were ever seriously going to plug that gap then we could not afford to effectively dismiss half the working population.

I have enjoyed a great career associated to the industry and wanted others to see the opportunities available. I felt a real responsibility to contribute to its growth and development in a tangible way so we set up Jobs for the Girls as a way of encouraging more women into the industry.

Breaking down barriers by changing perceptions

One of the biggest barriers we faced at the start was changing perceptions.

For too long the electrical sector, and wider construction industry, had suffered from a poor image. The notion that women couldn’t physically do the work and were there only to be wolf-whistled might have been outdated but was a hangover that was hard to shift.

In that regard, one crucial and early victory was a complaint to the Advertising Standards Authority (ASA).

It revolved around a particularly sexist advert that appeared in the trade press and on advertising hoardings. A major brand in the industry was running a competition with the top prize – ‘An ultimate lads’ night out’.

The advert featured men in workwear sitting round in a van whilst a woman in underwear cavorted around a pole. Not only was it sexist in nature it was the wholly wrong image the industry needed at that particular time. What sort of message might that send out to any woman considering a career in the industry?

One billboard was outside a comprehensive school which I passed on my drive to work every day. It would have been seen by young women about to make career choices and it was frankly not funny and poorly judged. I was accused of lacking a sense of humour by the firm promoting these images, but I was confident that the majority of people, including tradesmen would consider that kind of image nothing to laugh about.

Thankfully the ASA upheld my complaint and the adverts were pulled from future publications. It felt like we had won our first battle. However it was still odd that firms thought this was an acceptable campaign in the 21st Century.

One of the key objectives at the start was to challenge the notion that becoming an electrician was for males only. Although rare in numbers there were female electricians who were doing the job perfectly well and making a good living from it. We wanted to make them role models for others so we spoke to them and encouraged them to become ambassadors for the campaign.

They were only too willing to help. People like Eleanor Bell, Kellie Dillon Welch, Mandy Reynolds and Elecchicks were early supporters and using their experiences really helped.

They had successfully trained as electricians and their stories were vital in showcasing the fact that women could do the job and there were real benefits to be had from a career in the trades. Their experiences also supported our research which revealed there was now a good business case for women to become an electrician. Many households actually preferred female contractors coming into their home as they felt safer and less intimidated.

Our research also revealed that there was now a very real interest from women of all ages in learning a trade. The industry is extremely varied with opportunities in a range of specialist fields including creative areas such as lighting.

For the 16-24 age group it was seen as an alternative to academic studies due to the high costs associated with going to university. Training to be an electrician gave them the opportunity to earn as they learn without the fear of incurring large debts

For the 35-50 generation becoming an electrician was also a viable second career. They might have trained in one profession but wanted to seek an alternative career later in life as circumstances changed.

The opportunity to have their own business and work flexible hours appeals to many women – particularly those who have to juggle a home life and job. 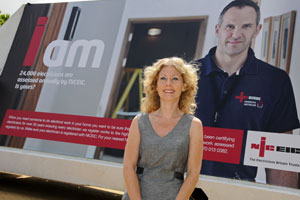 There is no doubt that the building sites of today are a different environment compared to 20 years ago.

Seeing a woman in a hard hat is not as uncommon as it once might have been and employers are recognising this talent and giving them the opportunity to shine. The sexist attitudes and misogyny of a bygone era are thankfully on the wane. Employers, aware of their responsibilities and laws regarding equality, will now not accept such behaviour on site.

However, certain attitudes do still exist. One of the most challenging conversations I’ve ever had is when a mother fed back to me that her daughter had been treated badly and had left the industry. She asked me if she thought it was right that I encourage women to join the industry when such things were still going on.

Her point was fair but we need pioneers. I felt I had a responsibility to support those for whom this is a good choice whilst at the same time trying to make that daughter’s experience truly a thing of the past. In that respect there is still a long way to go until it is perhaps seen as the norm for a woman to be carrying out what is traditionally seen as ‘man’s work’.

One area that could help with this is providing schoolchildren with more information at an earlier age. For too long now girls aged 14-16 are pushed down the route of traditional ‘women’s careers’ such as hairdressing or childcare.

If more information was made available at the age, when real decisions about future careers are being made, then hopefully we could see a changing of the tide where becoming an electrician or other tradesperson is seen as a viable and achievable career for a woman.

Together we can achieve more – having values and sticking to them

I’m not an engineer myself – my background is in HR, retail and banking. I have the upmost respect for my technical colleagues but what I bring is something different and together we can genuinely achieve more.

What is important is to have a belief and confidence in what you are doing is right. Being a woman in a male dominated industry means you can often bring a new approach and as with any industry it is important to be principled and earn the respect of your peers for the decisions you take. Having values and sticking to them.

Without our people we don’t have a business

That approach is reflected in the way I lead. We are a Times Top 100 company and strive to be fair in all we do and value each other. I recognise that without our people we don’t have a business. This approach was not something that was immediately accepted but as the benefits became obvious then it was soon established as the way we are going to do things.

I don’t think being a woman has made any difference to the way I approach or handle a situation but there have been some awkward moments along the way.

When I first started out I had to attend many meetings surrounded by men who were very sceptical of a woman entering their domain. At one gala event I was with a male colleague and we were talking to industry colleagues and it was clear the assumption was that my colleague was the boss … well he was the man after all!

The conversation went on for some time, until the patronising question was raised, ‘And do you work dear? My colleague was laughing for the rest of the night.

Moving beyond the cliques

If I have any bug bears about this industry (or any other for that matter) it is the importance of cliques whether that’s through golf days or other sorts of “club” membership.

Someone once said to me that having a good sense of humour is not defined by people laughing at your jokes. The clique culture seems to promote this type of self-preservation and congratulation where difference of any kind is not encouraged or celebrated and is often excluded. How can any industry evolve if it doesn’t learn and grow from those not laughing at the same old (frankly boring) jokes.

Thankfully, my views on this are now well known within the sector and the personal invites for such events have dropped off considerably – or just gone straight to one of my male colleagues!