You are currently reading Issue 119: Women of History, March 2021
Skip to content 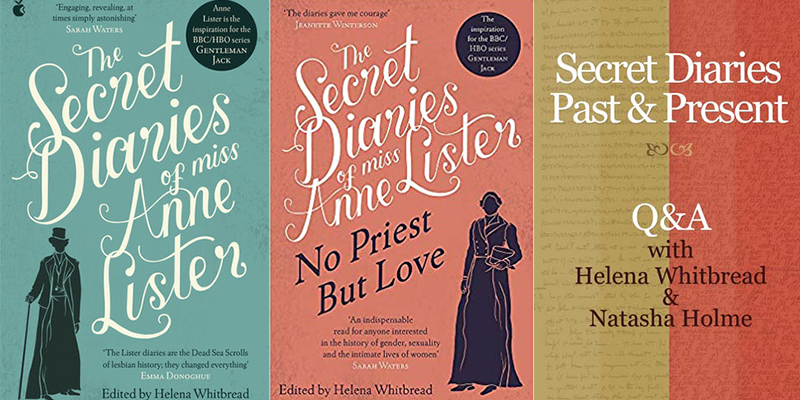 Helena Whitbread is a historian, author, and editor/decoder of the diaries of Anne Lister. Helena has now published three books about Anne’s story, whose diaries have added a new dimension to the history of women’s sexuality. These diaries have won the recognition of the United Nations as a ‘pivotal’ document in British history and were added to the UNESCO Memory of the World Register.

“For the first time in all of women’s history, Anne’s journals were positive proof that lesbianism had existed throughout the ages. Anne Lister is now a global icon who has given the lesbians of today the courage to live their lives more openly.”

In 1935, at the age of four, I attended St Joseph’s Roman Catholic School in my hometown of Halifax, West Yorkshire. In 1942, I passed what was known as the 11-plus exam, which meant that I was awarded a scholarship place at St Joseph’s College in Bradford, a Catholic college for girls.

Two years later, in 1944, due to ill-health, I could no longer continue at the school and my education was cut short at that point. As an adult, I decided to pick up my unfinished education and went to the local College of Further Education where, from 1965 to 1968, I gained sufficient qualifications to enter the civil service.

After eight years as a tax officer, I decided to apply for a university degree, and I entered the University of Bradford in 1976. After three years of study, I gained a B.Sc. (Hons) in Politics, Literature and the History of Ideas.

This was followed by a year at Holly Bank Teacher Training College, which awarded me a PGCE (Post-Graduate Certificate of Education) and enabled me to enter the teaching profession. I remained in that profession, mostly as a supply teacher with Calderdale Education Department, until I retired in 1994.

From 1983 to the present date, I have worked on the journals of Anne Lister (1791-1840) and have produced two books of edited extracts from them – The Secret Diaries of Miss Anne Lister: Volume One: I Know My own Heart and Volume Two: No Priest But Love. Both books are published by Virago Press. 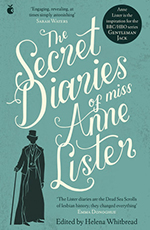 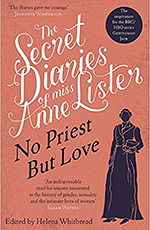 Discovering Anne Lister, a woman ahead of her time

One of my ambitions on entering university was to prepare myself to become a writer. Realising that novel-writing was perhaps not my forte, I became interested in thinking about writing short articles on various subjects, including historical figures, and submitting them for publication in various magazines.

I had known about Anne Lister vaguely from items I had read about the Lister family at their Halifax home, Shibden Hall, and decided that she might be of sufficient interest for my first piece of research.

This took me down to my local archives where I found, firstly, her letters and then her journals. When I saw that a great deal of the entrants for her early years were written in a secret code, I immediately became interested in finding out why this woman, who had lived in my own hometown some two hundred years ago, felt the need to be so secretive.

As there was a key to the code lodged in the archives, I obtained a copy of it and photocopied the first fifty pages of the journals and began to read and work on them from that point on.

Every week I would go to the archives, copy a further fifty pages, and work steadily through them for the five years from 1983 to 1988. By then, I had sufficient material from which to compile the two books mentioned above.

Substituting a letter for a symbol

Anne’s code is composed of a mixture of numbers, Greek letters, and symbols of her own devising. There is no form of punctuation and there is no space between individual words. 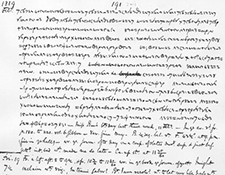 Once all the symbols had been matched with the appropriate letter then, as I say in the introduction of the first volume of The Secret Diaries of Miss Anne Lister: ‘… it had to be the decision of the decoder to impose a structure on the sequence of words that emerged – to define where words and sentences begin and end.’ Only then could the complete coded section become readable.

Although outwardly maintaining her position as a respectable member of society, Anne’s essential nature was that of a misfit in a conventional world.

Her lesbian sexuality set her apart from her peers. ‘Alas, I am neither man nor woman in society. How shall I manage?’ [Journal entry 26th January 1830.]

Anne Lister was born into a minor land-owning family, the Listers of Shibden Hall, Halifax, West Yorkshire. She was the second child of Captain Jeremy Lister and his wife Rebecca Lister (née Battle). She spent her childhood between the towns of Market Weighton, in the East Riding of Yorkshire, and Halifax, in the West Riding of Yorkshire.

In 1815, at the age of twenty-four, she went to live permanently with her Aunt Anne and Uncle James, unmarried brother and sister, at Shibden Hall in Halifax. On her Uncle James’ death in 1826, she inherited Shibden Hall and its estate.

Anne was seen as ‘special’ in her time for a number of reasons. Her status as member of the land-owning Lister family gave her a distinct social advantage in the local community. Her knowledge made her stand out as a woman who people felt in awe of i.e. ‘…Someone who did not know me said to Mrs John Raper of me, ‘One must not speak to her. She is a bluestocking.’ [Journal entry 23.3.1820.]

Both men and women were impressed by her: Some were over-awed and others, women in particular, were frightened by her. Comments by people in later years give an insight into how Anne was perceived by people who did not know her well.

Anne recorded their impressions in her journal: ‘…Mrs Simpson … told Mariana this morning she could not bear me, that I was the only woman she was ever afraid of. Wondered how anyone ever got acquainted with me. Mentioned my deep-toned voice as very singular. The girls said they were afraid of me but could like me because Mariana did.’ [Journal entry 22.3.1820.]

Her masculine appearance was enhanced by her decision to wear only black clothing which, along with the strong black boots she wore, were signifiers of her sexuality.

Later, when she inherited the Shibden estate, her abilities as a businesswoman meant that she could compete successfully with the Halifax businessmen, especially in the coal-mining industry. And, finally, her phenomenal travels as far as Georgia in Russia, where she died, has earned her a place in the history of women travellers. All these factors combined to make Anne Lister ‘special’ in her time.

A global icon for the LGBT+ community

It is the fact that Anne Lister was the first (so far as is yet known) to write explicitly about sex between women which makes her so important for the LGBT+ community.

Rictor Norton called her ‘The first modern lesbian’ because of her (coded) accounts of lesbian sex.

[Emma Donoghue said of Anne: “When [her diaries] were decoded…lesbian history was changed forever. The Lister diaries are the Dead Sea Scrolls of lesbian history. They changed everything.”

For the first time in all of women’s history, Anne’s journals were positive proof that lesbianism had existed throughout the ages. Anne Lister is now a global icon who has given the lesbians of today the courage to live their lives more openly.

The two Virago volumes cover different periods in Anne’s life. The first volume is based on Anne’s journals from 1816 to 1824, and is mainly set in her hometown of Halifax (which is also my hometown), and in the city of York.

All Anne’s family and friends are made known to us in that volume – her home life at Shibden Hall, where she had gone to live permanently in 1815 – and her love for, and disillusionment, with Mariana Lawton (Née Belcombe).

Neither Jane Austen nor Mrs Gaskell could have provided us with more accurate pictures of social life than that which Anne Lister gives us of this small Yorkshire town in the Regency era of English history.

In the second volume, Anne has moved into the world of wider travel and leads a much more sophisticated life in Paris, where she tries to put the heartache of her failed love-affair with Mariana behind her by embarking on a love affair with a young widow, Maria Barlow. After a six month sojourn in Paris, Anne has shed her provincialism and acquired the air of a much more sophisticated woman of the world. 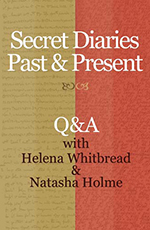 The third book is a small book that my co-writer Natasha Holme and I published through Amazon, called Secret Diaries: Past & Present. It is basically a comparison between two lesbians: the historical 19th century Anne Lister and the modern-day Natasha Holme, who both kept diaries written in a secret code. It is perhaps a rather idiosyncratic publication but, as one reader commented, the book provides ‘…a great insight into the parallels of hidden sexuality across different eras.’

The meaning of Women’s History Month

It has taken many years, if not centuries, for the achievements of women throughout history to be recognised and, therefore, it is imperative to ensure that we do not lose the opportunity to foreground those contributions and the strong women who were responsible for them.

This is the raison d’être for allocating the month of March as a significant reminder of the importance of women’s position in society and to laud their contributions in virtually all aspects of life. Those points encapsulate the meaning, for me, of Women’s History Month.

My life at the moment is consumed by finalising the work on the biography of Anne’s early life (1791-1826), on which I have been working for the last two decades. The possibility of its publication is an exciting thought for me.

Another source of pleasure lies in the hope of seeing the town of Halifax once more playing host to all the Anne Lister devotees from many parts of the world who had thronged here in pre-Covid days to walk in Anne Lister’s footsteps.

In the interim, I am busily engaged in giving Zoom talks on various aspects of my work on Anne Lister – the immediate one is to be a discussion entitled ‘What impact did her Parisian experiences have on Anne.’ 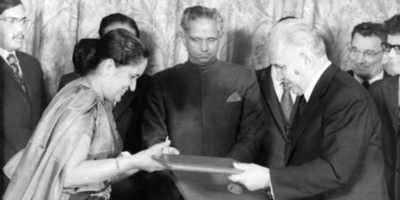 Women’s stories only make up half a per cent of recorded history: Let’s change this by putting 70 extraordinary women in a new book – Rosalyn Ball, Engagement and Equality Specialist, Speaker and Author 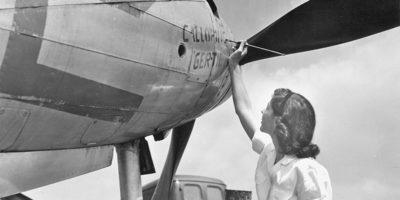 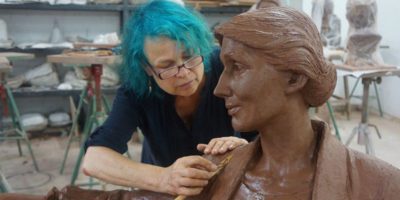 Creating Virginia Woolf’s first-ever life-size statue: Let the world pause on tributes to men for a spell so we can catch up! – Laury Dizengremel, Award-Winning Sculptor