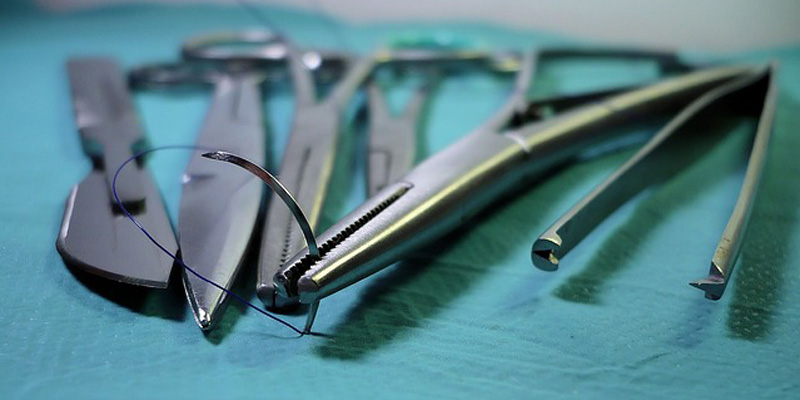 Rebecca Grossman is a specialist registrar in general surgery at the Royal Berkshire Hospital. She is the South East Junior Doctors’ Representative for the Medical Women’s Federation and Deputy Chair, as well as the General Surgery and Less Than Full Time Training Representative on the Oxford Surgical Trainees Group.

“…Over half of medical school graduates are women, but less than a third of surgical trainees are women, and at the consultant level, only 11% are women…”

Fascinated by the mechanics of the body

I always wanted to be a doctor. I remember seeing plastic anatomical models at school and being fascinated by the mechanics of the body, wondering how it could go wrong and how it could be fixed. It is this that later drew me to the speciality of General Surgery, which mostly involves operating on the abdominal cavity.

I studied medicine at the University of Cambridge, and then went to London for my clinical studies and my first four years as a doctor. I was very fortunate to get onto a General Surgery training programme straight out of Core Surgical Training. It was at this point that I moved to the Thames Valley Deanery, which is based around Oxford.

Check out this diagram I put together to help explain the surgical career pathway.

What we mean by the term ‘registrars’ 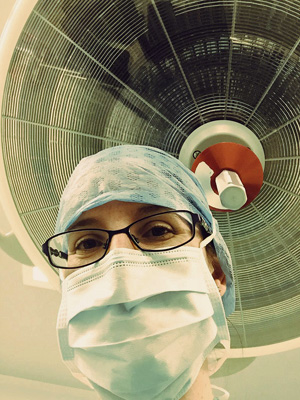 A registrar is a doctor at the most senior stage of their training, before they become a consultant. At this point they have already chosen their speciality, have usually taken some specialist exams, and can so some work unsupervised if it’s appropriate to their level. Registrars have a multitude of responsibilities, including supervising more junior trainees, but they ultimately report to their consultants. They are therefore technically still “junior doctors”, although some of them are over 40!

Impossible to get bored

One of the wonderful things about my job is how varied each day is. This makes it impossible to be bored! A typical day starts at 07:30, when I see patients who have come in for their operations and obtain their consent. The most common planned operations we do are hernia repair and gallbladder removal.

I then start the ward round, seeing the patients that were already admitted to the ward and making a plan for their ongoing care. We then have a briefing in the operating theatre with the rest of the theatre staff before starting the first operation. Between cases I have to check in with the more junior members of the team to see how they’re getting on with the jobs from the ward round.

On some days I have a clinic instead of theatre, which results in quite a bit of paperwork! I also have 24-hour shifts on call, when I see patients who come in as an emergency, for example with appendicitis, bowel perforation or trauma.

Finally, I have to keep up to date with my training portfolio. That includes participating in audits and research, attending educational meetings, submitting papers for publication and presentation, teaching medical students, and gaining management experience. In my case, I am involved with the Medical Women’s Federation, and act as a representative for General Surgery trainees and Less Than Full Time trainees in the Oxford Deanery.

My special interest in those who train less than full time

I returned to work from maternity leave in 2016, and realised I didn’t really know who to turn to for advice about Less Than Full Time [LTFT] training. I spent some time researching the practicalities of it myself, and it then seemed logical to share the information I’d gathered with others who might need it, so I applied to be a local LTFT representative. 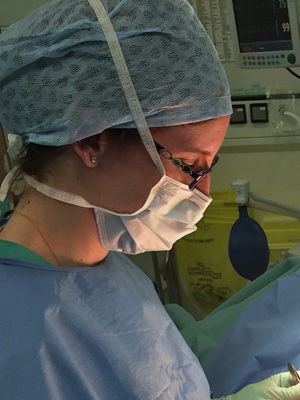 Some people are surprised that it’s possible to train LTFT in surgery, but surgeons are people too, and can have other important commitments in their lives. These might be caring for children or elderly relatives, or they might be unique opportunities and achievements such as being an Olympic athlete. Some people need to train LTFT due to their own ill health or disability.

The Association of Surgeons in Training (ASiT) did a survey in 2016 which showed that nearly one in five trainees had previously or were currently training LTFT, and over 9 out of 10 of these trainees were female. Interestingly, over half considered training LTFT in future, and over a quarter of these were male. The demographics of surgical trainees are changing, and the profession needs to change if it wants to remain an attractive option and therefore a competitive speciality.

Over half of medical school graduates are women, but less than a third of surgical trainees are women, and at the consultant level, only 11% are women. When you look at the most senior positions, such as clinical directors and professors in academic surgery, the balance is even more in favour of men.

One of the most important things that can be done to address the gender balance in surgery is to promote it as a career option for girls and young women. There are a number of organisations that aim to promote gender equality in medicine, including the Medical Women’s Federation and Women in Surgery at the Royal College of Surgeons.

The reasons why women are deterred from applying for surgery are complex, but seem to boil down to a lack of confidence and a lack of role models. This is similar to other aspects of STEM. Part of overcoming this involves busting myths and addressing stereotypes about women in surgery.

Social media have been immensely helpful in promoting women in surgery. Check out the hashtags #ILookLikeASurgeon and #NYerORCoverChallenge!

Social media has allowed the rapid dissemination of studies showing that the quality of care delivered by women surgeons is as good or greater than that delivered by men.

I’ve come across some truly remarkable female surgeons who went viral on social media after posting photos of themselves at work with their babies. Seeing these women makes me hopeful for a changing face of equality in the 21st century.

Dr. Swabrah Swaleh Breik conducting surgey with child on her back. Circumstances dont stop us from helping our patients pic.twitter.com/gEvK2zZ9Ni

To paraphrase Chimamanda Ngozi Adichie, women no longer have to be a facsimile of a man to be successful, and can stop being apologetic for their femaleness and femininity. (Although bringing a baby into the operating theatre may not be the best idea for infection control reasons…)

In my first surgical job as a Foundation Year 1 Doctor, I was working for two female consultants. I sometimes wonder whether I would have pursued a career in surgery if I hadn’t had such good role models so early on. When I told them I was interested in being a surgeon, I remember one of the consultants saying two very important words to me: “Why not?” This idea has stuck with me since then: if other women can do this, why not me? And, more crucially: if men can do this, why not me?

Route to becoming a consultant

I have a number of years left of training before I become a consultant – one of the downsides of training LTFT is that it does take longer! My interests are in Upper Gastrointestinal Surgery (surgery of the stomach, small intestine, liver and gallbladder), in particular Bariatric and Metabolic Surgery (surgery for weight loss and diabetes). I would love to take some time out to do research but we’ll have to see if I can fit that in! 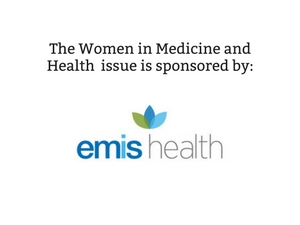