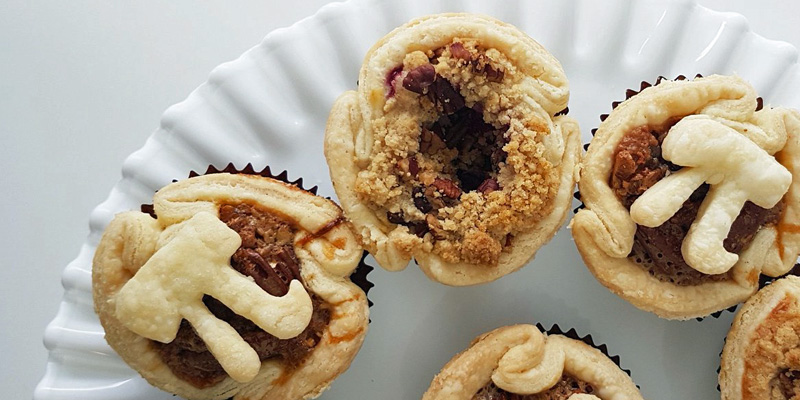 Kristine Bauer is an assistant professor of Mathematics at the University of Calgary. She has specialist knowledge of algebraic topology and her research interests include homological algebra, homotopy theory and calculus of functors. She is a founding member of Women in Topology, which promotes the retention and visibility of female mathematicians through collaborative research and she recently participated in an event to support Beakerhead, a festival of art, science and engineering, which is set to take place September 2017.

The first time I knew that math made me happy I was still in high school. One snow day when school was cancelled, rather than slip back to sleep I worked on a puzzle that I heard on the radio. Take nine dots, arrange them in three rows and three columns so that they form a square. Without lifting your pencil from the paper, connect all of the dots using only four straight lines. When I solved the problem, it made me really happy. Later on, I realised that this is exactly the same feeling you get when you solve a tricky math problem.

As an undergraduate at Vassar College, I had a mentor, Professor John McCleary, who helped me become acquainted with knot theory. At first I tried to focus on the applications of this kind of math – I thought the real-world applications would motivate me to continue. In the end, I realised that my love of math stems from that initial satisfaction I had from having solved that first puzzle. I’m driven by what I see as beautiful – solving a problem is like putting things together the right way. At the end, the pieces fit and it is beautiful.

My role at the University of Calgary

At the University of Calgary, my day to day activities from September to April involve as much teaching as research. Teaching is incredibly rewarding, especially when I am able to share my favourite things with students. When I explain something to students, it’s like I have to relive the experience of learning the material for the first time all over again – so I still get that sense of satisfaction from setting things right. When my students have that “a-ha” moment it’s like I can feel it too; they get excited, I get excited, and it goes on and on. It’s such a positive feeling.

When I work on my research, the setting is quite different. To concentrate on a problem, I need quiet at the start so I’m usually alone in my office or in the library. I enjoy collaborating with others. On my best days, once I’ve got the problem in my head you’ll find me at my chalk board with colleagues, or else at my computer in a video chat.

For me that’s the most enjoyable way to solve a problem, by exchanging and building on one another’s ideas. This is perhaps not what other mathematicians enjoy; I think the standard vision of how math is done is by one bright guy working alone. There are a lot of times when I work by myself because I need to grapple with understanding something, but being alone for too long doesn’t suit my personality. I always come back to working in teams because I find that experience more rewarding.

My area of research is algebraic topology. Topology is the study of shapes and surfaces with no distance measurement. In topology, two things are the same if you can deform one into the other without tearing or gluing. We often joke that a topologist is someone who can’t tell the difference between a coffee cup and a doughnut since you can deform the cup onto its handle, which is the same shape as the doughnut.

I was drawn to topology because of the time I spent working with knots as an undergraduate. Although I was initially drawn to these objects because I could draw them and visualise them, I soon found that I was really limited by depending on this visualisation.

In algebraic topology, we use algebra (think of polynomials) to classify the features of topological spaces without having to have a picture of the space – this is useful when the shapes aren’t one, two or three dimensional.

In homotopy theory, our “spaces” are infinite dimensional, so visualising the objects is really out of the question. The relationship between algebra and topology really goes two ways: we use algebra to observe and describe topology, and we use techniques from topology to approach questions originating in algebra. The latter thing is what my work is about.

I think that it’s important to have diverse participation in any work that requires more than one person’s ideas. That covers virtually everything. Diversity creates original ideas – you can’t have brand new ideas coming from a limited segment of the population who all have the same kind of experience and background.

I recently saw a talk by Fields Medalist, Manjul Bhargava, in which he explained how the Fibonacci sequence – the sequence of numbers 1, 1, 2, 3, 5, 8, 13,… can be seen in a way that is unfamiliar to most mathematicians. It arises naturally in the structure of drumming and poetry in India. This change of perspective allows a mathematician to manipulate this structure in new ways, and can be the thing that inspires innovative solutions to hard problems.

We have to acknowledge that our experience as women is different from our male colleague’s experience. It is hard to put a finger on exactly which parts of our experience will turn into that creative solution, because so much of our experience is shared with the men around us and it isn’t always easy to see what makes us different and special. But the subtle differences between men and women mean we work differently and our contributions contrast in a way that is fresh and original.

For me, the thing that makes math fun and drives me to keep going is working collaboratively on problems. A few years ago, while talking with some of my colleagues, an idea evolved amongst us about what to do to retain women in math.

Some of my colleagues had been involved in collaborative projects only amongst women – the idea being that these projects would be fun, would naturally build in mentorship of younger women by more experienced colleagues, and would result in original solutions to problems and publications that would mean that everyone involved had one more paper with which to survive in the publish-or-perish culture of the academy.

Four of us in my field of research decided to try to put something together for algebraic topologists. We recruited team leaders to pitch open problems and assembled teams including women from all stages of their careers to work together.

Over the course of 18 months everyone on the team engaged in the training you need to attack an unsolved problem; all of the teams met in Banff, in Alberta, Canada for one week to work on solutions, and every team wrote a professional paper which reported their final findings and were published in a volume called “Women in Topology: Collaborations in Homotopy Theory”.

Some of the teams continued to collaborate and wrote multiple papers. Two years later, we started working on a second workshop and found that the number of qualified women in the field who wanted to participate had doubled since our first workshop. We are just about to finish the volume for the second workshop, and the quality of papers is extremely high – collectively, our work seems to be getting better and better.

I recently had the opportunity to collaborate with some scientists and fantastic local bakers at a community event to support Beakerhead. Beakerhead brings together the arts and engineering sectors from across the city, province, country and world to build, compete and exhibit interactive works of art and entertainment, culminating in a five-day international phenomenon of art, culture, science and technology every September.

From outdoor artworks and late-night laboratories, to community contests and celebrations, interactive digital events to event premieres, Beakerhead is a crucible for human ingenuity. Since its inception four years ago, Beakerhead has grown to offer engaging science discovery opportunities throughout the year and includes a science outreach partnership with schools.

Calgary is a great place to be a scientist, with Beakerhead offering so many opportunities for people to engage in science the same way they engage in art – for fun, for curiosity and for community.

One of the reasons I love Beakerhead’s STEAM approach to science is that it incorporates the best of the cultural norms we already have for approaching art and science separately. Scientists observe the natural world using whatever method of observation they can, and Beakerhead’s approach brings this to art displays as well by encouraging patrons of its art displays to touch the art. Most art museums I’ve been to would frown on this.

On the other hand, Beakerhead’s science is a far cry from what you might find in a dry textbook or a lecture hall. My first Beakerhead math experience was a life-size cube within a cube presented by my colleague, Clifton Cunningham, who performed as a science busker at the Beakerhead street festival.

The math he was using – which was about loops in the space of rotations of three-dimensional Euclidean space – was a magic trick about knotting and unknotting strings attaching the corners of the cubes. It was fun, tactile, engaging and didn’t involve a single formula or equation. This best-of-both-worlds approach encourages people to ask questions and look for deeper meaning and understanding in things they can see and understand. In the end, that means it makes the community more scientific.

This year I was incredibly fortunate to be able to participate in a Beakerhead pi party where we teamed up with a local bakery, Crave Cupcakes, to make pies and pi for Pi Day. The amazing ladies at Crave taught the partygoers how to make the best pie crusts, and everyone went home with six pies.

My colleague, Clifton Cunningham, (the same colleague who first introduced me to Beakerhead) and I set out some Genius Challenges and kept everyone mathematically entertained. One challenge was a competition to see who could cut out circular pie shells from a big circle of dough with the least waste. This is a surprisingly difficult problem that is part of a family of problems known as circle or sphere packing.

In another demonstration, we saw that the random distribution of candles lying flat on a cake for Einstein’s birthday is related to pi. If you cut the rectangular cake into strips, the probability that the candles cross the strips is related to the number pi. Since Pi Day is also Einstein’s birthday, it was a nice tribute. And Crave awarded Einstein cupcakes to the winners of the challenges.

This was my first Beakerhead event, but I doubt it will be my last. Anyone who happens to be in Calgary, Alberta from September 13th – 17th this year will likely find themselves immersed in art and science collisions across 60+ unique events. This year I’ll be there as a patron of the sciences rather than a performer or artist, but who knows? Maybe next year you’ll find me on Stephens Avenue hawking my algebraic topology wares.

For a more descriptive listing of upcoming events, or to get involved, head to Beakerhead.com. I know the Beakerhead team is always receptive to ideas about community science engagement!