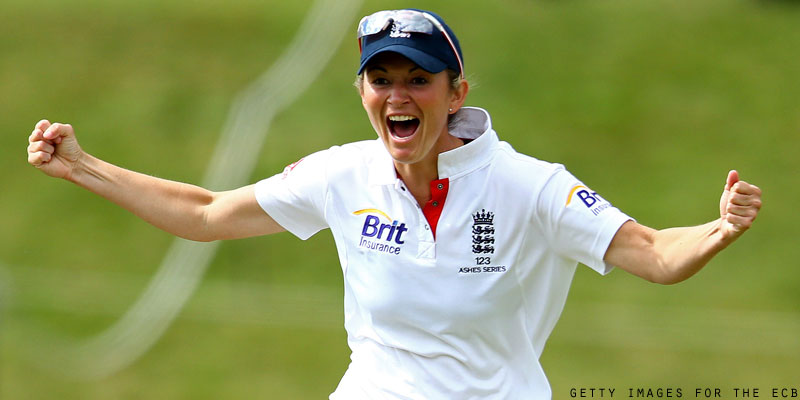 When England Women’s cricket team captain Charlotte Edwards made her debut for the England Women’s team she was the youngest player to play for England at the age of 16. In 2014 April she became only the second woman to be named as one of Wisden’s Five Cricketers of the Year. Charlotte has won five Ashes series, the World Cup and the World Twenty20 in an 18-year international career, which in 2009 saw her awarded an MBE for services to sport. She is also the captain of the Kent team and a coach in the ‘Chance to Shine’ scheme, which encourages cricket in state schools.

“…No-one questions our cricketing ability now. They take it for what it is. They don’t compare it to the men’s game anymore…”

How did you first get into cricket?

Cricket was very much in my family. My dad played, my brother played, my uncle played, so from a very early age I was dragged down to the local cricket club and I played cricket with the boys down there from the age of three or four. I was very fortunate to have an older brother who loved cricket, so we spent a lot of time playing in the back garden. It was in the family. I could only have dreamed of where I’ve got to now.

How easy was it to progress when there were so few other girls playing?

When I was growing up I played all boys cricket so I didn’t realise women’s cricket existed until I was about 13.

Once I realised that I had huge ambition to play cricket for England, but boy’s cricket really accelerated my learning and my skill level. I had to play boy’s and men’s cricket, but that isn’t the case now. There is a female pathway in place, which is great for a young girl setting out to play the game.

You’re a bit of a record breaker. Where to do you get that competitive drive from?

I’m hugely proud of playing cricket for England. I wouldn’t have had such a long career if I hadn’t wanted to be the best that I could be.

I’ve been privileged to play with some incredible players. With all the things that are happening around women’s sport at the moment, I think that’s the motivation itself to hopefully inspire the next generation of girls to play the game.

The success of the team in the last 12 months has been unbelievable. To play a very small part in that has been great. I think that’s probably where the motivation comes from to keep wanting the team to be successful and obviously individually to keep being on that team sheet and captaining the team.

Would you say that women captains lead in a different way to men? 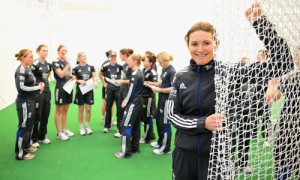 I wouldn’t say that it changes that much. On the pitch it’s very similar. You react to what you see. I’ve got a huge amount of experience so that’s something I can always fall back to.

Off the pitch we are probably very different to men in terms of the way we lead the team; probably a bit more sympathetic and there’s a bit more empathy around what you do, but I’m still very hard and fair on the team. There’s probably with a greater understanding of the teammates, but I wouldn’t think it’s too dissimilar to men’s cricket.

There are probably a few more tears around the women’s dressing room than there are the men’s. I guess you’ve got to be wary of that and how you go about dealing with it.

Would you say the culture varies for women playing in different parts of the world?

There’s obviously a cultural difference with the girls in Pakistan and India. India is a wonderful place to play cricket. Cricket’s a religion over there, but there are barriers around certain females being able to play.

Playing in a number of countries and experiencing their different cultures has been one of the highlights for me. The other highlight for me is playing the game; I never thought I’d travel the world playing the game I love. That’s been really unbelievable.

How do we go about increasing the amount of coverage of women’s sport?

We always want more, obviously, but I think we’ve got to be realistic and think where women’s sport has come even in the last two years with the Olympics; it’s come on so much.

For me personally talking about cricket, the last 12 months has been unbelievable in terms of us becoming professional and the media recognition. There are lots of good things happening, but these often get forgotten about because everyone compares it to the men’s game.

I’m really proud of where women’s sport is at the moment. We’ve always striving for more and I think we always will be. I think perceptions of women’s sport have changed a lot in the last five years and hopefully they will change even more in the next five years.

Are you hoping that women’s sport will become the norm so there’s less emphasis on comparisons with the men’s game?

No-one questions our cricketing ability now. They take it for what it is. They don’t compare it to the men’s game anymore. I think it’s probably the same in football and rugby. They actually appreciate the game for what it is.

How is commercial sponsorship affecting the opportunities for female players?

We’re under the ECB (England and Wales Cricket Board) umbrella and we get the sponsorship like the men (Waitrose is our team sponsor) and all the benefits that come with that. We’re very fortunate as a team to have some wonderful sponsors involved in cricket.

It’s something we’re really pleased with – especially the new Waitrose sponsorship, which has been fantastic. I think my poster is up in Waitrose stores at the moment! They’ve certainly bought into the women’s aspect of the game. There’s obviously a strong connection between food and cricket so it’s fantastic to see the recognition we’re getting in terms of our sponsors now that they value the women’s team as a real product.

Could you talk us through the types of activities you’re doing in schools?

Over the last six years a number of the England women’s players have been working with the Cricket Foundation as part of the ‘Chance to Shine’ scheme, which means that we go into local state schools and deliver cricket sessions to try and inspire the pupils to play the game.

It’s something that’s worked really well for us. It’s had a huge impact on our grass roots levels and hopefully given more girls the opportunity to play. Not only that, but it’s delivering the message that there is a career in cricket.

It’s wonderful to go into the schools and to be that person to hopefully inspire the next generation of girls to play. An amazing 1 million girls have now gone through the programme. It’s unbelievable. We’re very privileged to be part of that and it’s something that’s very close to my heart in terms of going into a school and inspiring that next girl to play cricket, but not just to play cricket for England.

It’s just about giving them the opportunity to play cricket. It’s a great initiative and hopefully it’s having a huge impact on women’s cricket.

How would you recommend women beyond school age find out more about the game?

Contact your local cricket board (there’s 38 all over the country) or your local club. Get down there.

Most clubs now will have some sort of women’s or girl’s section and hopefully get involved that way or the got to the ECB website to find your nearest club.

The game is developing rapidly and there will hopefully be lots of opportunities in the game not just for young girls, but for women. Twenty20 cricket is probably the best form of the game to get older players into cricket.