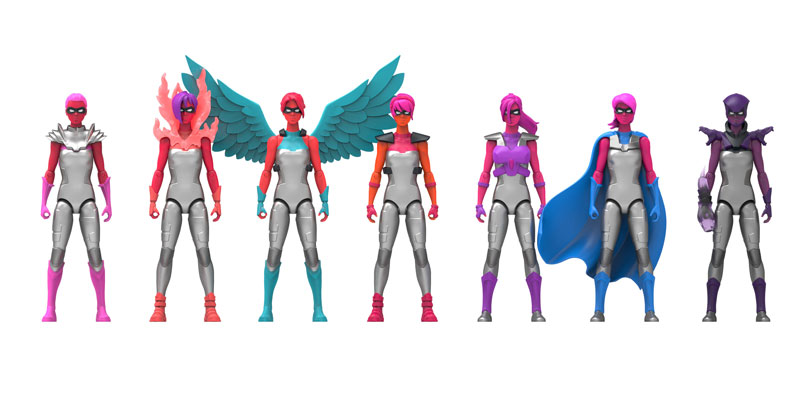 IAmElemental was founded in 2013 by Julie Kerwin and Dawn Nadeau after they became frustrated by what they saw, and didn’t see, in the toy market. On 12th May 2014 Julie and Dawn launched a Kickstarter crowdfunding campaign to bring to market a new range of IAmElemental female action figures. At the time of writing with the campaign still open with eight days to go, Julie and Dawn had 1866 backers, who have pledged $128,964 against an original target of $35,000.

“…we set out to design fierce, strong female figures with a healthier breast to hip ratio. As we like to say, “more Heroine, less Hooters…”

First of all – congratulations on smashing your crowdfunding target on Kickstarter! How does this make you feel?

Thank you! We are so grateful for the enthusiastic response and generous support. As a privately held, self-funded partnership, we knew from the beginning that we would have to rely on the crowdfunding model to, as we like to say, “test the hypothesis.”

Even if we had been able to secure investors, the barriers to entry in the world of action figure development are too high for two women with an idea. We felt that we had a great idea, but we needed to prove it by generating a legitimate customer-base as quickly as possible.

Because the generally-held consensus that girls won’t play with action figures is deeply ingrained and culturally accepted, we have had to be very clear about the message we are trying to put out into the world. We are not anti-doll, anti-princess, or even anti-collector.

Rather, we believe that if you give a girl a different toy, she will tell a different story; one in which she is the active agent of a tale of her own creation. That message has resonated in a way that we find extremely gratifying.

In fact, it enabled us to reach our funding goal just two days after we launched. As a result, we feel that we have proven our hypothesis in a very real way. And we look forward to adding our voice to the conversation about, not just the way that girls play, but also how they perceive themselves, and how they are perceived by the world around them.

Please can you tell us a bit about yourselves?

We created IAmElemental, an independent toy company, to develop a new line of action figures for girls that re-imagines the female superhero.

We decided to fill that hole in the market. And, so, we set out to design fierce, strong female figures with a healthier breast to hip ratio. As we like to say, “more Heroine, less Hooters.”

Second, we shifted the action figure storyline. In the IAmElemental Universe, the girl is the superhero, and the figures are the personification of her powers. Called The Elements of Power, they are the building blocks of character that reside inside every one of us.

And, finally, IAmElemental is all about imaginative, active play. Our figures are articulated. They pose, stand, move, and sit without splaying their legs inappropriately.

We spent a lot of time ensuring that the toys represent a forward-thinking design and engineering sensibility beyond what is typically found in products geared toward girls, and we are very proud of the result.

You used Joan of Arc as your muse for the figures – what made you choose her?

IAmElemental is founded on the premise that every single one of us is already a superhero, and that all the superpowers we could ever want or need are already inside of us.

To that end, we are committed to inspiring girls (and boys) to be their best, most powerful selves by sharing with them examples of heroism in the real world.

As a result, we have spent a great deal of time collecting stories of powerful women who have done amazing things. Over time, we will be profiling these incredible women in some very interesting ways.

However, once we decided that Courage was going to be the theme of our first action figure series, Joan of Arc was an obvious Muse. Leading an army into battle was not only exceedingly rare for women of her time, but men as well.

The fact that she was only a teenager at the time significantly adds to her allure. Joan of Arc was honest, persistent, industrious, enthusiastic, and she was brave. Her story sends a clear and powerful message that, no matter our circumstances, everyone has the capacity to be Courageous and do amazing things.

What is next for IAmElemental?

IAmElemental has been in development for almost two years. Before we actually started designing the figures last July, we spent months brainstorming and researching ideas beyond action figures.

We have plans that would easily take at least the next five years to roll out. From the very beginning, our goal was to build a business. These figures are our starting point. We want to be known for action figures, but the opportunities for a lifestyle brand are tremendous. We like to believe that we are just getting started.