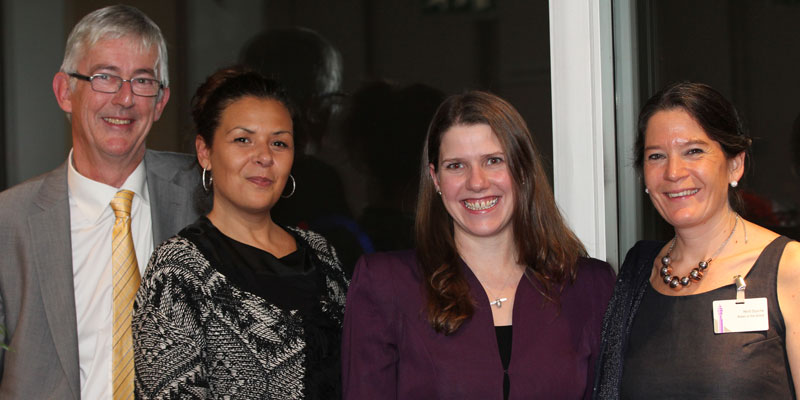 In September 2012 Jo Swinson was appointed the Minister for Employment Relations and Consumer Affairs in the Department for Business, Innovation and Skills and Minister for Women and Equalities in the Department of Culture, Media and Sport. Former Deputy Leader of the Scottish Liberal Democrats, Jo chaired the All Party Parliamentary Group on Wellbeing Economics, the All Party Parliamentary Group on Body Image and was a co-founder of the Campaign for Body Confidence.

On 18th November 2014 at the British Bankers’ Association (BBA) 2014 Mentorsme Awards for Excellence in Women’s Enterprise Mentoring, Women and Equalities Minister Jo Swinson announced that female business owners across the country will benefit from additional mentoring support. During Global Entrepreneurship Week, the government announced £150,000 to fund ‘Meet a Mentor’ events which will link up female-led businesses, at both the start-up phase and at the point when they are exploring business growth, with mentors.

It is vital that we support female entrepreneurs. There are more women-led businesses in the UK than ever before, and we know that if women were setting up and running new businesses at the same rate as men, our economy could benefit from one million more entrepreneurs.

Mentoring is key to this. It helps to build confidence, develop key business skills and provides a network of contacts for those starting out. That’s why we are funding a series of mentoring events across the UK, launching tomorrow on Women’s Entrepreneurship Day.

These issues can be really well addressed by positive, supported mentoring programmes, so that people have somebody they can rely on who understands what they’re going through and can provide that useful advice and signposting. That’s why that mentoring network is so important; having those contacts, having that advice, developing those skills, and crucially to build that confidence as well.

Time to ‘Get Mentoring’

Now, the government’s already invested nearly £2 million in the ‘Get Mentoring’ project and provided specific funding to recruit and train 6,000 mentors, in particular for women. And I’m delighted to be able to announce that we’re strengthening that package of support by announcing nearly another £150,000 to run a series of ‘Meet the Mentor’ events up and down the country.

The first one is starting tomorrow. It’s very oversubscribed. These are going to be in all different parts of the country and I think that’s going to be a really positive way of getting this message out to people who have the skills to start a business, have got an idea.

The government provided £1.9m of funding towards the ‘Get Mentoring’ project which was run by SFEDI. These mentors can be accessed on the Mentorsme website.

The Women’s Business Council (WBC) was established by the government in 2011 – it is supported by Government Equalities Office and overseen by Ministers – to look at ways of maximising women’s contribution to economic growth and assesses priorities in removing the barriers that women face in playing a full part in business and the workplace.

Mentorsme is run by the British Bankers Association on behalf of the founding UK banks (Barclays, HSBC, Lloyds Banking Group, Royal Bank of Scotland and Santander) in order to help businesses start up, grow and develop and help access the skills and finance they need.

(Pictured from left to right in the image at the top of this article are: Bruce Turner and his mentee, Rachel Wilson of Black Energy Renewables, Jo Swinson and Hetti Dysch of Babes in the Wood)